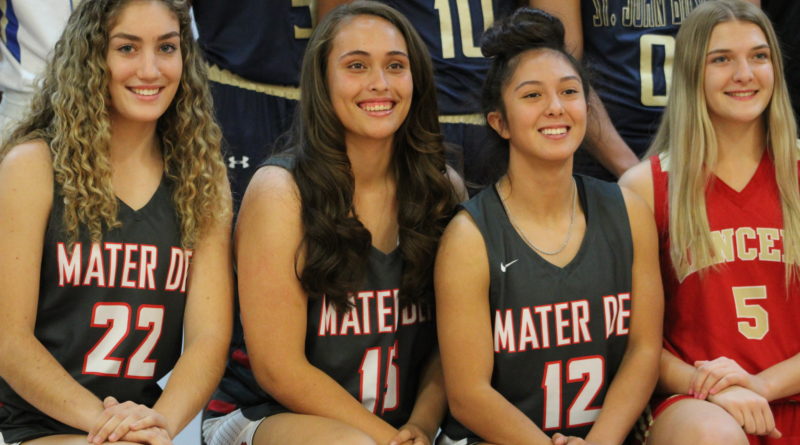 Now that the sample size is large enough, the rankings span out to 25 teams, where they will stay for the rest of the season.

Since losing to New Hope Academy on December 21, the Jackrabbits have been lights-out against premier competition. Last week at the SoCal Holiday Prep Classic, they beat Gardena Serra, Etiwanda, Cathedral Catholic, and La Jolla Country Day. They followed it up this past Saturday by beating Corona Centennial by 15.

Their only two losses have been to a couple of the best teams in the country and neither of them are on the West Coast. After knocking off LCDS and even more now after beating Cen10, Long Beach Poly enters this week as the unquestionable top team in SoCal.

By the numbers, Long Beach Poly is on a shortlist of the best defensive teams in the country. Even with only a couple players six feet or taller, they routinely hold nationally elite teams under 50 or even 40 points. With their quickness and length across the board, they’re forcing nearly 13 steals per game and countless more overall turnovers.

Mater Dei also had yet another dominant week. At the West Coast Jamboree, they walloped a fearsome Bishop O’Dowd squad 69-30, and then edged out even better teams in Archbishop Mitty and Sierra Canyon. A couple days later they crushed Orange Lutheran and Santiago, and also beat a strong Las Vegas Centennial team by six.

In fact, just how dominant has their entire season been? They’ve lost one game out 17, and it was to Long Beach Poly in overtime. They won’t play the Jackrabbits again until potentially the playoffs, but if Poly loses one game, no matter who it’s against, Mater Dei would be the new number-one. But for now, there’s no question that it goes to Poly. Mater Dei might have another impressive week lined up with Rosary Academy and Santa Margarita on deck.

For all intents and purposes, LJCD and Mater Dei could be tied. They’ve both only lost once, and it was against Long Beach Poly. Mater Dei is on more of a roll now so they won the tossup for second, but La Jolla Country is still in the hunt for anything against anyone, including retaking number one at some point. After losing to Poly, they whooped Las Vegas Centennial.

Breya Cunningham has broken out this season as possibly the top freshman in the country, averaging 17.2 points, 11.6 rebounds, three blocks, and 1.2 steals per game. In fact, with those numbers and the national recognition of LJCD as a top-ten team in the country, she has a serious chance at getting All-American honors as a ninth grader. And speaking of All-American candidates, senior G/F Te-hina Paopao is averaging nearly 23 PPG to go with 6.6 boards and 3.5 assists and steals per game.

While they lost to Mater Dei by one point, there’s no question that Sierra Canyon is still one of the best teams in the country. They beat some premier NorCal teams at the West Coast Jamboree in Cardinal Newman and St. Joseph Notre Dame, but beating Patrick School (NJ) by 15 tells you everything you need to know.

If they’re going to make it back to number one, it might be a while before they get the chance. They have Cathedral Catholic, Bonita Vista, and Chaminade this week.

The Eagles are still the clear fifth-best team in SoCal right now after another nice week. They beat Rosary Academy by one and Granada Hills Charter by 15. Etiwanda has Los Osos, Rancho Cucamonga, and Marlborough this week.

Centennial beat Redondo Union by 30 last week before losing by 15 to Long Beach Poly. One would love to see them keep it to single-digits even against the cream of the crop, but with a double-digit win against Windward already in their excellent season, they are still the rightful holders of the sixth spot.

The Wildcats only played one game last week, and it was more than enough to keep number seven locked in–they beat West (Torrance) by 45.

The Royals almost beat Etiwanda but came up short by one point last Monday, and have now had a week to sit on it. Their long-awaited clash with Mater Dei finally comes Tuesday. They’re still very close to the rest of this top group, which is continually gaining slight separation from the rest.

The Wolverines picked up another nice win last week against Murrieta Mesa to move to 10-6 and bounce back from a couple losses the week prior. They’re entering their stride with the hardest part of the regular season over.

After upsetting Plano the week prior, the Warriors beat a strong St. Mary’s Academy squad last week by 26. They are rolling and may end up near the top five before too long.

The Spartans are moving back up after a good week at the Energy Classic. They knocked off one of the better teams in the Bay Area in Miramonte, crushed a good Thunder Ridge (ID), and capped it off by beating Lynwood by ten. It was only a matter of time.

Lynwood is still in good shape even after losing by double-digits against Orangewood Academy. In the days before that at the Energey Classic they beat a couple good teams in Bishop Gorman (NV) and Douglas (WY).

It was another not-bad week for Chaminade. They beat Buchanan and Redondo Union fairly easily before falling to a worthy adversary in Clovis West.

Marlborough only had one game last week, beating a good Loomis squad handily as expected. Along with Chaminade, the rest of their schedule is no joke, because it’s Mission League time. They also have a matchup this week with Etiwanda.

The only losses for King this season have come to Windward, Mater Dei, Orangewood Academy, and Rosary Academy, and most of them have been close. Last week they blew out a very strong Valley View squad and also beat a good Valley Christian (San Jose team) by double-digits. They just don’t have a lot of impressive wins on the year, but that could change in their challenging league circuit.

It was a disappointing week for West to say the least. They got blown out by 45 against Windward, and then lost by double-digits to Las Vegas Centennial, a strong team but one they’d hope to beat or at least take down to the wire.

The Mustangs’ only game last week was a route of Fairmont Prep. They have M.L. King on Monday.

Like Roosevelt, the Crusaders only played one game last week on Monday, and it was a win against a strong Oak Ridge team. There’s a very solid chance that they win out for the whole rest of the regular season if they stay healthy.

The Huskies’ only losses to U.S. competition have come to Mater Dei Catholic and Roosevelt last weekend in the SoCal Holiday Prep Classic. However, both of them were surprisingly not single-digit games.

Every single loss for the Dons this season has been to a team in our top 11, except for Fresno’s Clovis West who would quite possibly be in our top 11 if they were in SoCal. And their wins haven’t been against great teams. But at a certain point, one could argue that consistently taking teams like Long Beach Poly and Etiwanda down to the wire is more impressive than what even some of the teams in front of them have been doing this season.

While Perry (AZ) and El Camino Real are very good teams, Bishop Montgomery had no business losing to them last week. The Knights did pick up a couple blowout wins against Compton and Dominguez, but that’s what one would expect from them.

Dropping them seven spots is a little harsh, but they’ve been losing steam for a couple weeks now. However, they’ll have plenty of chances to climb right back up in the next few weeks, and I trust them to capitalize on them.

The Aztecs demolished Orange Lutheran last Tuesday. Their only losses this year came to strong foes in Aliso Niguel and St. Paul, and they haven’t played many elite teams, except they did shock Orangewood Academy a month ago.

It was another successful week for the Centurions, beating Camarillo and Crescenta Valley. Before that, they beat Flintridge Prep. They’ve also had a few disappoint losses this season. They’re a little confusing, but might have just needed some time to reach peak-form.

It was disappointing to see Camarillo lose another game against one of their few fully worthy adversaries so far this season, but they’re still doing great at 13-3 with wins over a lot of good teams.

The Rebels only losses this year have come to Rosary Academy, Marlborough, Saugus, and a massively unpredictable but talented Redondo Union squad. Gardena Serra could beat them, but I expect them to clean up in league play, which would make them quite a wildcard going into the playoffs with few losses and only a few signature wins.

While the Saxons haven’t played anybody ranked on our list, they’ve been cleaning up with room to spare against good teams all season. Time will tell whether or not their inclusion here should’ve come sooner or wasn’t warranted at all.

Other teams in consideration: