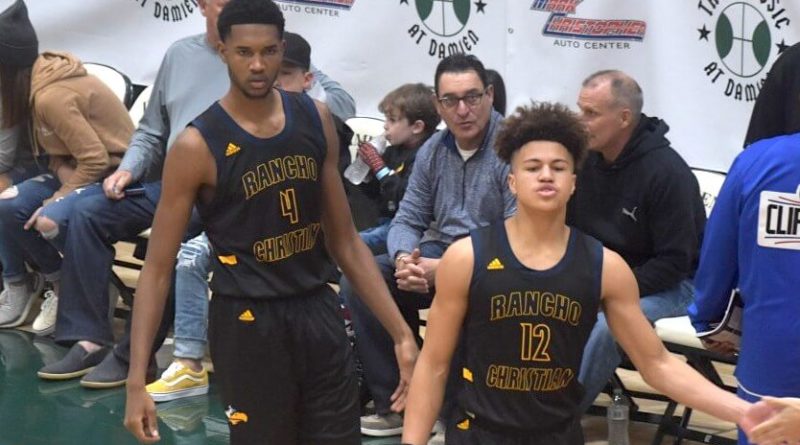 Here are Scorebook Live’s Top 25 California high school boys basketball rankings for the week of January 6. Our rankings encompass the entire state and are compiled by Scorebook Live California reporters Connor Morrissette, Bodie DeSilva and Lance Smith. The rankings will be released weekly during the regular season.

The Eagles have won 12 games in a row. Rancho Christian knocked off previously undefeated Sierra Canyon in the Classic At Damien Platinum Division championship last week and then avenged an earlier loss to Santa Clarita Christian at the Real Run Winter Classic on Saturday. That’s two top ten wins in their last two games.

The Trailblazers fell to Rancho Christian 85-81 to lose their top spot a week ago. They dropped another game over the weekend in Minnesota 78-58 to Minnehaha Academy.

In their last contest, Sheldon lost to JSerra in the Torrey Pines Holiday Classic championship game 52-50, but they were without star senior Marcus Bagley. Sheldon has beaten Corona Centennial, Mater Dei and Santa Clarita Christian. The Huskies move into the top three following Harvard-Westlake’s loss to St. Anthony even though they did not play this past week.

Harvard-Westlake fell to St. Anthony 59-58 at the Take Flight Challenge over the weekend. Their win over Corona Centennial keeps them in the top three.

Corona Centennial blew out Lynwood 96-50 at the Real Run Challenge on Saturday.

Etiwanda destroyed Birmingham 75-43 over the weekend.

St. Anthony picked up a huge win over Harvard-Westlake 59-58 at the Take Flight Challenge on Saturday. They have two top ten wins on the year. The Saints have split two games with St. John Bosco.

The Cardinals won the Gold Division at the Classic At Damien beating Heritage Christian, Chaminade and Washington Prep two weeks ago. SCC lost to Rancho Christian 82-69 over the weekend.

The Braves had a strong showing at Damien, finishing fourth in the Platinum Division. They beat Oakland’s Bishop O’Dowd in overtime over the weekend.

Heritage Christian picked up an important win over Bishop Montgomery 65-61 at Real Run over the weekend.

Salesian blew out their two opponents over the weekend. Salesian’s best win is over Windward.

Windward finished in sixth place in the Classic At Damien’s Platinum Division. They beat Hillcrest 59-45 over the weekend.

Dublin beat Salesian College Prep earlier this season, but their defeat to Fairfax at Damien moves them to 15.

Renaissance has won eight games in a row after beating up El Camino Real 79-44 on Saturday.

The Saints played well at the Torrey Pines Holiday Classic beating Riverside Poly and Torrey Pines two weeks ago. They fell to eventual champion JSerra 67-63 in the second round.

The Spartans won 67-51 in Northern California over St. Joseph Notre Dame on Saturday.

Chaminade had two blowout wins over the weekend.

Fairfax’s best win on the year is over Northern California’s Dublin.

Capistrano Valley’s only loss was against JSerra. Their best wins are over Poway and Sonora.

Archbishop Riordan lost to Serra San Mateo 50-48 over the weekend which dropped them to 25.