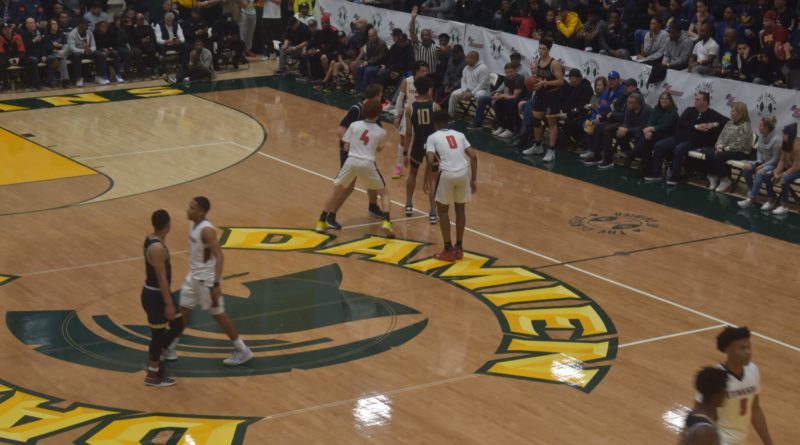 LA VERNE– Etiwanda defeated St. John Bosco 57-54 on Monday at the Classic At Damien to effectively claim the bronze medal in the Platinum Division. The Eagles trailed by ten points in the third quarter and made a late push led by outstanding defense and Jaylen Clark’s 16 points.

St. John Bosco took a ten-point lead halfway through the third on a three by Hunter Richardson that made it 44-34. Etiwanda responded with a ten-nothing run of their own to erase the lead before the end of the quarter, and only allowed ten points for the rest of the game. The Braves still led by one or two possessions for much of the rest of the game, but they no longer had the momentum in their hands by the end of the third.

And Etiwanda knew it–all five of their starters were introduced as guards, and that’s just how they play. Etiwanda spent most of their half-court sets attacking frontcourt players mismatched onto quicker guards, and got out in transition when they could.

Bosco knew what was coming, and came out ready with a fairly uniquely-shaped zone coverage with just one big man staying near the paint and the other four switching around the perimeter. They also did a very good job keeping the Eagles from constantly leaking out in transition when possible. Offensively, Nyarko had an efficient scoring night getting the ball in his spots in the mid-range and knocking them down over shorter defenders, and that kept the Braves on top for a while.

But they needed to dominate the rebounding battle and/or points in the paint battle to have a great chance to win this game, and as a result, Etiwanda essentially neutralized the size differential. They hit just a few more clutch shots, got to the free throw line, capitalized at a high clip when they got there, and that was the difference.