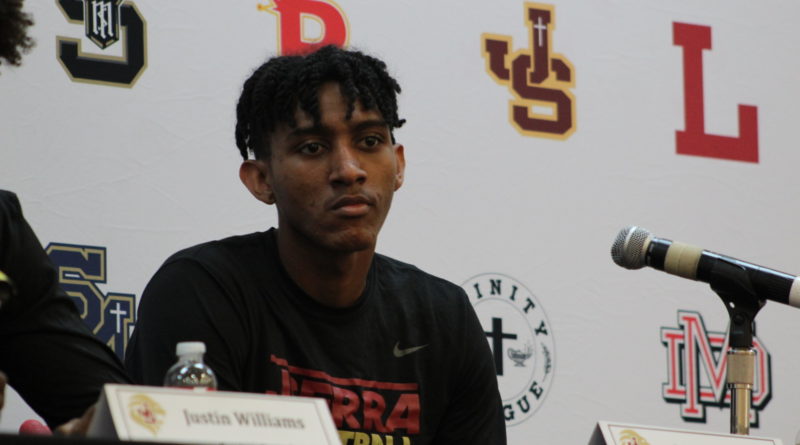 Here are Scorebook Live’s Top 25 California high school boys basketball rankings for the week of Dec. 31. Our rankings encompass the entire state and are compiled by Scorebook Live California reporters Connor Morrissette, Bodie DeSilva and Lance Smith. The rankings will be released weekly during the regular season.

The Eagles have won 11 games in a row; they’re the hottest team in Southern California. Rancho Christian knocked off previously undefeated no. 2 Sierra Canyon in the Classic At Damien Platinum Division championship on Monday 85-81 in overtime.

The Trailblazers fell to no. 1 Rancho Christian 85-81 to lose their top spot.

The Wolverines are undefeated in California. They picked up an important 57-49 win over No. 8 Santa Clarita Christian two weeks ago.

Sheldon lost to no. 11 JSerra in the Torrey Pines Holiday Classic championship game in the national division 52-50, but they were without star senior Marcus Bagley. Sheldon has beaten no. 5 Corona Centennial, no. 6 Mater Dei and no. 8 Santa Clarita Christian to preserve their top five ranking.

Corona Centennial won the Tarkanian Classic top division two weeks ago and then won the King Cotton Classic championship in Florida this past week over Florida University. They outscored University 26 to nine in the final quarter. Corona Centennial’s two losses are to no. 3 Harvard-Westlake and no. 4 Sheldon.

The Cardinals won the Gold Division at the Classic At Damien beating no. 13 Heritage Christian, no. 19 Chaminade and Washington Prep. Ty Harper was named MVP.

The Braves had a strong showing at Damien, finishing fourth in the Platinum Division.

JSerra won the National Division of the Torrey Pines Holiday Classic beating no. 4 Sheldon 52-50. They’ve won 13 games in a row.

The Saints won the Senators Division of the Torrey Pines Holiday Classic to move to 16-1 on the year.

Heritage Christian finished in fifth place in the Classic At Damien’s Gold Division following a frustrating double overtime defeat to no. 8 Santa Clarita Christian 80-77. Heritage Christian beat Jesuit and Valencia after the loss to claim fifth.

Windward finished in sixth place in the Classic At Damien’s Platinum Division. Senior Devin Tillis picked up his first Division 1 scholarship offer from UNLV on Monday.

Renaissance has won seven games in a row but were off last week.

The Saints played well at the Torrey Pines Holiday Classic beating no. 21 Riverside Poly and Torrey Pines. They fell to eventual champion no. 11 JSerra 67-63 in the second round.

The Spartans finished their own tournament on a high note by taking seventh place in the Platinum Division with a 100-73 annihilation of Birmingham.

Chaminade has two losses to two out of state opponents and a 67-55 defeat to no. 8 Santa Clarita Christian on the year. The Eagles finished in third place in the Gold Division of the Classic At Damien beating Rolling Hills Prep 58-56 in the consolation game. They will contend in the Mission League.

St. Bernard came into the Classic At Damien undefeated, but lost three out of four games in the Platinum Division. Senior guard Nick Bowden got hurt in game one of the tournament and the Vikings never looked right without him.

Poly lost to Sheldon and no. 16 St. Augustine at the Torrey Pines Holiday Classic, but beat Foothills Christian 72-57.