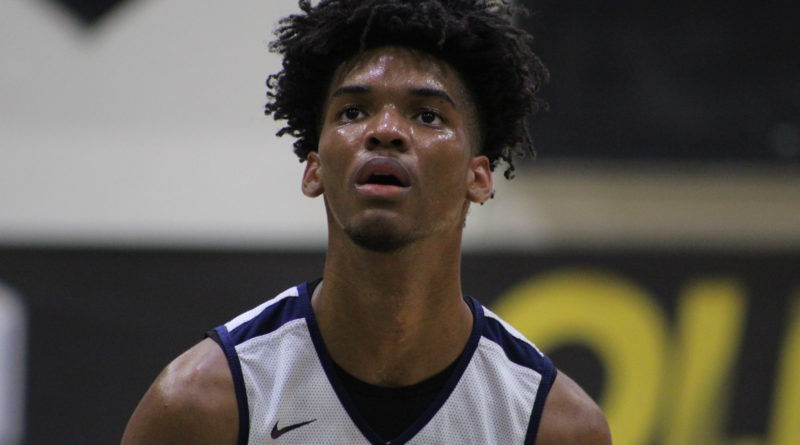 Last February, Rancho Christian upset Sierra Canyon 61-58 in a thrilling regular season boys basketball game. Sierra Canyon was arguably the best team in the country last season, both going into that game and on the season as a whole, but Rancho Christian got the better of them that time and now the Trailblazers are geared for revenge.

On Monday, the two teams will duke it out in the Classic at Damien title game for the Platinum (highest) Division. Rancho Christian again comes in as one of the better teams in the country – a consensus top 100 team, and top 50 according to many experts. Sierra Canyon again comes in as a top five team in the country, and arguably the absolute best at this point in the season.

Rancho Christian returns most of the same core that made them a nationally elite squad last year and beat Sierra Canyon last season. PF/C Isaiah Mobley is now at USC, but C/PF Evan Mobley, an athletic seven-footer and the top-ranked high school basketball player in the country, is still an Eagle. 6-7 F Luke Turner and 4-star G Dominick Harris, who led last year’s matchup with 23 points, are locked and loaded.

However, this is not the same Sierra Canyon as last year. They’re still yet to prove whether or not they are an even better squad, but either way they have retooled. Scottie Pippen Jr., Cassius Stanley, and KJ Martin are gone, in addition to a number of other key rotation players.

5-star sophomore SG Amari Bailey now runs the show along with 5-star senior SG/SF BJ Boston, both of whom often run the de facto point in a somewhat positionless offense. Alongside them is one of the best front-courts in the country in 7-4 C Harold Yu and forwards Shy Odom and Terren Frank. Odom is a strong 6-6 combo forward and Terren Frank is a 4-star PF who has taken a starring role this season as a senior. As you’ve likely heard, Bronny James and Zaire Wade provide excellent back-court depth, along with Lathan “Tookey” Wigington.

Last year’s battle proved this one could go either way. On paper, Sierra Canyon is the clear favorite, but it’s no sure thing. There are a few ways to break down the X’s and O’s for Monday. Monday is said to be the day that Ziaire Williams, one of the very top prospects in the country, becomes eligible. Whether or not he plays–and how ready he is to step into a huge game against an elite team in midseason form–will also be a crucial factor. Right now, here’s how it all breaks down.

SIZE IS AN X-FACTOR

There’s nothing subjective about how big and tall players are, but here’s why size can go either way in this matchup. On paper, Sierra Canyon has an edge in this department, with 7-4 Yu and 6-8 Frank presumably starting up front regardless of Williams, 6-7 Williams or 6-6 Odom at small forward, and a massive backcourt of 6-7 Boston and 6-5 Bailey. Rancho Christian’s size consists mainly of Mobley, who’s at least seven feet tall, 6-7 F Luke Turner, and 6-6 F/C Jaden Simpson.

The thing is, Evan Mobley, the consensus top prospect in the country, is not a plodding big man like most teenage seven-footers. A center he matched up against recently described to me, “Evan is made different. He’s seven feet tall but plays and moves like KD. There’s nothing you can do.”

If he’s aggressive and playing to his strengths–attacking the rim in space off the dribble or rolling downhill–Yu might not be able to keep up with him, even if Yu will be able to body him physically. And Yu rarely plays much more than half of a game anyway. If Mobley gets going and Yu gets into foul trouble, it will be up to Frank, Odom, or potentially Williams to check him, in which case Mobley’s vertical advantage inside could be the Trailblazers’ Achilles heel similarly to last year.

That said, if Mobley is not dominant or gets into foul trouble, the size of Sierra Canyon will almost certainly be insurmountable for Rancho Christian. Turner is a great stretch-four and one of the more underrated prospects in SoCal, but not a prototypical paint anchor against a Sierra Canyon team that can and will throw out lineups with an average height of 6-9. And if Yu happens to get going in the low post, Rancho Christian is in big trouble with or without Mobley.

If Turner and Mobley play well on both ends and avoid foul trouble, and the Eagles get a strong performance out of strong paint-oriented big man Jayden Simpson, they could make their stand inside. With so many guards who could attack Sierra Canyon’s only player in the vicinity of seven feet on the pick-and-roll, Rancho’s best chance is to try to force Harold Yu out of the game and then try to exploit Mobley’s length advantage inside with shooters around him.

Sierra Canyon is beatable when, and essentially only when, they go cold from deep. They can attack the rim like nobody else in the country, without any exceptions. When they’ve “struggled” this season, meaning winning a game by only single-digits or losing a quarter, it’s been the result of teams being able to load up against them in the paint.

Other than Yu, who stays inside as 7-4, 300-pound centers usually should, everyone on the Trailblazers can shoot. The question is if it’s worth daring them to do so, because they absolutely cannot be matched up with in transition or when they are attacking in half-court sets.

Bailey, Odom, and Frank are all very capable shooters but have at times been successfully sagged off this season. Williams is about the same–at his best with the ball in his hands attacking. James, Wade, and Wigginton are all great drive-and-dish guys. The Trailblazers may be incendiary from deep, but they may also go cold or have an off-night as a unit, and that would spell danger when trying to attack Evan Mobley’s paint.

Rancho Christian is roughly equally spread between attacking and spacing the floor. Mobley can shoot but generally is a bigger threat going to the rim, and Simpson does his best work inside. Other than that, they have a bunch of guys who do a lot of both. Turner is a corner-three sniper who punishes teams off the dribble if they try to run him off the line. Harris is in nonstop attack mode, but can certainly stroke it from three. The Eagles have great guard depth with Jayce Catchings, Jaden Byers, and Bryson Stephens, all of whom can get hot quickly. Floor spacing has not been a problem this year, and some of their wins have come by draining jumpers all game, but it’s not impossible that they go cold as a unit as well.

SIZE ON THE WINGS PUTS SIERRA CANYON OVER THE TOP

To be sure, Rancho Christian has a great chance at an upset just like last year, but I think this year is different for Sierra Canyon. Rancho Christian no longer has two long, athletic Mobley’s wreaking havoc inside, and I think the Trailblaizers’ size in the backcourt/wings will be too much for Rancho Christian.

With Bailey ready to take on any challenge defensively and more great defenders in Boston, James, and potentially Williams, this year they are likely much better-equipped to match up with Dominick Harris. Sierra Canyon is one of the only teams in the country that might have both the length and the quickness in the back-court to suppress Harris without letting the other explosive guards on Rancho Christian get going.

But with Harris, Catchings, Stephens, and Byers all coming in at 6-4 or shorter, will Rancho be able to match up with 6-5 Bailey and 6-7 Boston, and potentially 6-7 Williams? Maybe, but it’s not likely.

The Eagles have a strong chance to control the tempo if Mobley takes over, or outshoot Sierra Canyon if their guards get so hot that not even the Trailblazers’ athletes can contain them. If the Trailblazers go so cold from deep that Rancho packs the paint without getting torched downtown, the Eagles could pull off another upset. Otherwise, Sierra Canyon will be impossible to match up with for the 15th time in 15 tries this season, especially if Williams is back and as good as ever.