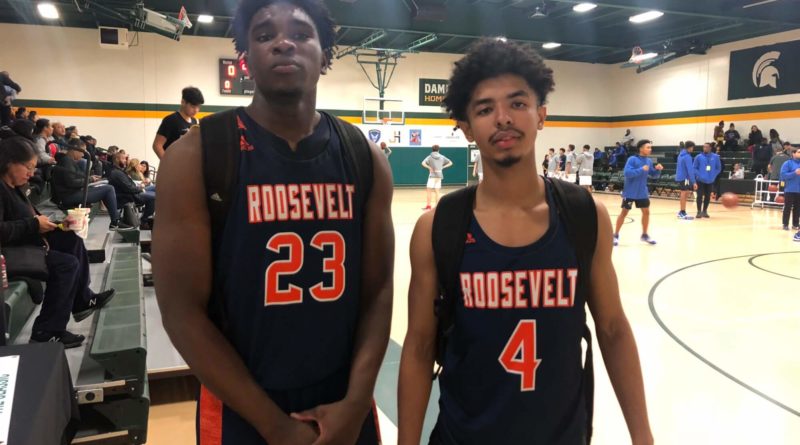 Rancho Christian beat up an undersized Damien squad in the paint en-route to a 82-59 victory. Damien’s tallest rotation player was 6-4, and Rancho Christian had at least three taller players on the court at nearly all times. The Spartans might have been able to make it a game were they having a strong night shooting from deep, but they were only average behind the arc and it was never particularly close.

Rancho Christian had four players in double-digits. Dominick Harris led the way with 21 points and Evan Mobley, Luke Turner, and Jaden Byers combined for 37. They will take on St. John Bosco tomorrow.

In an instant classic, Ty Harper scored 32 second half points to lead Santa Clarita Christian to an 80-77 double overtime win over Heritage Christian.

Harper pulled up for three as time expired in the first overtime session and tied the game at 68. He willed the Cardinals to the quarterfinal win in the second OT period. Santa Clarita Christian will play Chaminade in the semifinals on Saturday.

Sierra Canyon led Birmingham by as much as 15 in the first quarter before the sweet-shooting Patriots came storming back to completely erase the lead in the second quarter. However, the Trailblazers got going (aerial-style) in transition in the third quarter as Birmingham cooled off from the field, and Sierra Canyon effectively wrapped it up with a double-digit lead halfway through the fourth.

There weren’t any dirty plays or excessively hard fouls, but it was heated with trash talk and physicality, with numerous technical fouls coming on both teams.

Terren Frank and B.J. Boston led the Trailblazers with 18 points each. Harold Yu and Amari Bailey both had 13 as well.

David Elliott led all scorers with 22 for Birmingham. Elisha Cofield had 14 and Corey Cofield added 11.

Domination. A route. A clinic. Any of those descriptions apply for Chaminade’s demolition of Jesuit on Friday in a Gold Division quarterfinal. This one was over after the first quarter when Chaminade led 25-7.

Chaminade junior guard KJ Simpson led all scorers with 21 points, but four other Eagles finished in double figures. Chaminade is a well oiled machine. Jesuit is a good team. SoCal, consider yourself warned…

St. John Bosco pulled out a narrow victory over Windward in a game filled with three-point fireworks. The Braves never led by more than seven points, and it was a one or two-possession game for almost the entire game, but once they took an early lead they never relinquished it.

PF/C Isiah Holm led Bosco with 18 points on an efficient display of three-point shooting. SG Lamaj Lewis also had 13 for the Braves and F Jeremiah Nyarko finished with 10.

G Jaren Harris led all scorers with 20 points for Windward. G/F Devin Tillis had 11 and G Dylan Andrews had 10.

It wasn’t the prettiest game, but when the dust settled Washington Prep advanced to the semifinals of the Gold Division after beating Colony 61-58.

Washington senior big man DeShawn Johnson was stuck in traffic and missed the majority of the first quarter. In the fourth quarter he hit four consecutive free throws to clinch the victory for the Generals. Johnson finished with 18 points.

Colony junior guard Brenton Knapper left the game with a lower body injury in the second half. Freshman Kylan Boswell tried his best to pick up the scoring load from that point on. He finished with 24 points.

At the beginning of the season Washington Prep was expected to go through a rebuilding period. Instead, the Generals have competed at a high level from the get-go despite playing one of the toughest schedules in the region. Heading into Saturday’s semifinal matchup with Rolling Hills Prep, Washington is 8-7. Head coach Jovante King deserves a lot of credit.

In the end, JT Tan’s dominance in the paint won the Huskies the game. He finished with 27 points to lead all scorers. Valencia sharpshooter Jake Hlywiak scored 23 points. He made seven threes.

Rolling Hills Prep will play the winner of Colony and Washington Prep on Saturday.

Fairfax sophomore DJ Dudley scored 23 points to lead the Lions to a 74-69 win over Liberty in a Platinum Division consolation game. Dudley has emerged as one of the leading sophomores in the LA City Section.

G Little scored 13 points including a clutch three pointer with 44 seconds left in the fourth quarter to lift Roosevelt to a 54-51 win over Pasadena in a consolation Gold Division game. Watch Little’s game-winning three below.

Roosevelt will play the winner of Westview (Oregon) and Culver City on Saturday in the Gold Division consolation semifinals.

St. Bernard overcame the loss of sharp-shooter Nick Bowden, who hurt his ankle in the Vikings opening round defeat to Salesian, to beat Dillard 50-42 in a consolation bracket game. The game was neck and neck until St. Bernard pulled away late.

Bowden has an ankle sprain and will miss at least two weeks for the Vikings. St. Bernard will play Ribet Academy on Saturday.

For the second day in a row, a Long Beach Poly second half comeback came up short. Peyton Watson scored 21 points and grabbed 13 rebounds for Poly, but Ribet’s Tyler Powell scored 22 points and Barrington Hargress added 19 to lead the Fighting Frogs to a 68-62 consolation bracket win in the Platinum Division.

Poly fell to Birmingham yesterday after nearly completing a 20-point comeback and Ribet was blown out by Sierra Canyon. Ribet will play the winner of Dillard (FL) and St. Bernard on Saturday.

King/Drew senior Fidelis Okereke scored the key bucket that won the game for the Golden Eagles in triple overtime.

In the first overtime session Anderson drilled a three at the buzzer to send the game to a second overtime period.

Another classic at The Classic…