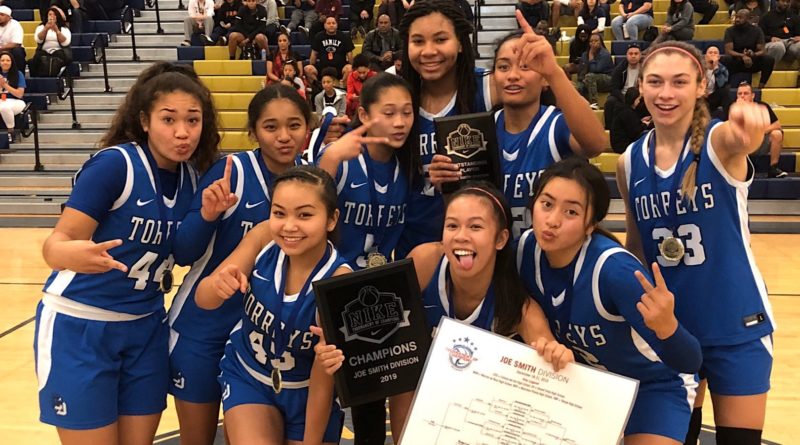 For a few weeks now, we’ve been saying that that LJCD is nipping at the heels of Sierra Canyon and Long Beach Poly above them.

Last week at the Nike TOC, they finally got their chance to challenge Sierra Canyon for the top spot directly, and they beat the Trailblazers 44-43. Equally impressively, that capped off a week in which they knocked off more nationally elite teams in Garfield (WA), New Hope Academy (MD), and Archbishop Mitty (San Jose).

The Trailblazers knocked off a couple of the best teams in the country in Blanche Ely (FL) and Riverdale Baptist (MD) at the Nike TOC before falling by one point to LJCD.

With no meetings with La Jolla Country Day on the regular season slate, they might not get their chance for revenge until a potential regional/state championship showdown months from now.

While they’ve slipped to third, the Jackrabbits are still in the hunt for the top spot going forward. Last week they beat one of the better teams in the country in Grandview (CO) before falling by single-digits to one of the absolute best in the country in Riverdale Baptist.

The Monarchs still hold the fourth spot just an inkling below the top three after a week without games. Their only loss came to Long Beach Poly in overtime a couple weeks ago, so they are still completely primed to compete for a state championship.

Etiwanda is in pretty much the same boat as Mater Dei, keeping their spot at five after a week without games. Their only losses this season came narrowly to the two teams ranked directly above them.

The Eagles have abundant opportunities to rise this week with matchups against Cathedral Catholic, Long Beach Poly, and Serra (Gardena) at the SoCal Holiday Prep Classic.

After losing by double-digits to New Hope Academy in the first game of the Nike TOC, the Huskies ended up with a very strong week, blowing out Garfield (WA), beating Beaverton, and blowing out Grandview. They’ll face another test on Thursday in Camarillo.

Despite falling by three points to Rosary Academy less than two weeks ago, Windward is just barely ahead of them in the rankings this week after knocking off two nationally elite teams in Bishop O’Dowd (Oakland) and Clovis North at the Nike TOC.

The Royals might not enjoy falling below Windward in the rankings having beaten them recently, but they lost by 21 to St. Mary’s (Stockton) and by three to Bishop O’Dowd at the Nike TOC after thoroughly beating Regis Jesuit (CO).

Rosary Academy is still high in our rankings despite finding themselves only two games over .500 because of their nationally elite schedule and multitude of close losses to excellent teams. They’ll have their chances to climb back upwards, starting with the SoCal Holiday Prep Classic this week, which includes a matchup with LJCD.

The Knights hang tight at nine after a 3-1 week at the Nike TOC. They beat Chaparral (AZ), Mullen (CO), and most notably, Shadow Mountain, all by double-digits. Their one loss came narrowly to a strong Fremont (NE) squad.

In two games of action at the Nike TOC, the Mustangs breezed by two overmatched squads in Gilbert (AZ) and Mountain Vista (CO). They’ll tip off the West Coast Jamboree against Buchanan.

It looks like the Knights haven’t played in a couple weeks, but their 4-2 performance keeps them locked in at 11 right now. Their only losses came to Mater Dei and Lynwood, with wins including Harvard-Westlake, Redondo Union, and West (Torrance).

Like Bishop Montgomery, Harvard-Westlake is on a brief hiatus from games but has still played enough elite competition to hold onto their spot from last week. Remember, their last win came by 15 points against formidable Clovis North.

You can copy and paste the last two slides for Flintridge Prep at 13. Their last game came on December 13th in a 60-point rout of Westridge. Their only losses came to Rosary Academy and Marlborough.

The Eagles narrowly overtook Esperanza last week beating a strong Christian Brothers squad from Sacramento and then handing Camarillo their first loss of the year, 55-47.

The Aztecs blew out an overmatched Hesperia squad in their one game last week. They have elected to spend the coldest time of the year in Alaska later this week for the tournament at Ketchikan.

With no games played last week, the Spartans are exactly where they were last week.

Fairmont Prep handled Yorba Linda easily in their lone game last week. Again, their only loss has come to Maribyrnong College from Australia, and we have reason to believe they aren’t a constituent of the CIF, so the Huskies are essentially undefeated.

Their 19-point victory over St. Paul earlier in the season is their best on the year, but they need more foes on that level to crack the top 15.