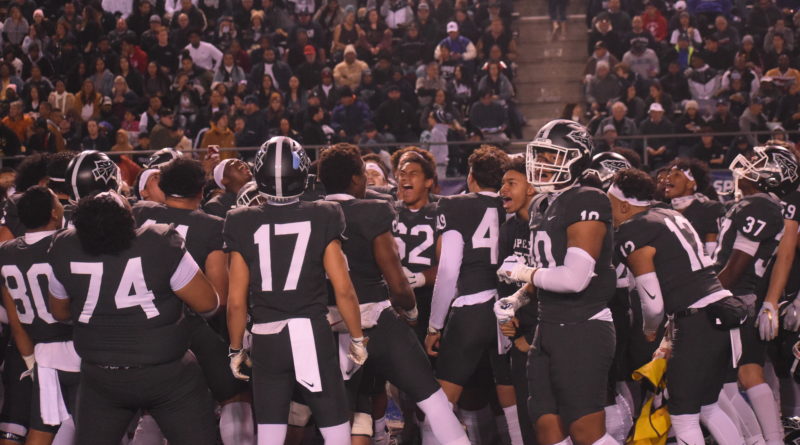 CERRITOS– St. John Bosco was already the consensus top-ranked high school football team in the country coming into their matchup with De La Salle, but they needed a state title to cement it.

They already knocked out Mater Dei for the CIF Southern Section Division 1 championship two weeks ago, a win that was

While the battle was never out of reach for De La Salle until the very end, St. John Bosco was able to settle in early with a quick touchdown and excellent first half defense.

Even when the Spartans repeatedly made it close down the stretch of the game, it never seemed to be heavily in doubt to the Bosco side–not that they were overlooking their opposition, but the Braves were very poised from start to finish, and didn’t get rattled when the Spartans went on runs.

De La Salle took a 21-7 deficit into halftime but never gave up. Every time it seemed Bosco was going to pull away, the Spartans would string together a score and a stop or two. The battle was still raging late into the fourth quarter when De La Salle had the ball and a 42-28 deficit, but St. John Bosco DE Matthew Jordan put the game to bed with a 96-yard fumble recovery touchdown.

The Braves consistently play at a level on offense that nearly nobody else in the country could ever dream of. This game was no exception. Hanging 49 points on De La Salle is a world-class accomplishment.

As usual, DJ Uiagalelei was the player of the game with four touchdowns and 398 yards in the air plus a touchdown and 64 yards on the ground. Kris Hutson, Logan Loya, and Beaux Collins all finished with over 100 receiving yards and a touchdown. Loya was also seven for seven on PATs.

And Bosco’s offensive line was dominant for most of the game against one of the better defensive lines in the country. Thanks to Drake Metcalf, Earnest Greene and the other Braves trench men, Uiagalelei usually had an abundance of time and space to work with.

The Braves defense didn’t play at its absolute highest level of the season, but it was still strong. Their front seven didn’t finish with many sacks, but Kobe Pepe and co. had De La Salle QB Dorian Hale scrambling a lot of the night. Kourt Williams did a lot of cleanup work at OLB, as did Jake Newman at safety.

With 207 passing yards and quite a few more rushing, Hale was one of a couple Spartans who were still able to have a strong night offensively despite constantly having to scramble. Other than Mater Dei, nobody has scored 28 points on Bosco this season–De La Salle didn’t take over offensively but they still brought it.

RB/WR Shamar Garrett was also very impressive, finishing with two rushing touchdowns in addition to snagging a long receiving touchdown that was called back because of holding. WR Grant Daley and RB James Coby had some nice moments as well.

ST. JOHN BOSCO IS ON TOP OF THE WORLD–THEY SAID IT

The Braves are now 2019 state champions and the consensus top-ranked team in the country. The only team they lost to they beat when it mattered most.

“Being able to say now that we are officially the undisputed national champions, number one in the country, is just the best feeling ever,” Metcalf told Scorebook Live after the game.

“I can’t even put into words how exciting it is, it’s so hard to contain all those emotions…I couldn’t be more thankful for what we’ve accomplished.”

“We didn’t want to just get a CIF [division] championship ring. Obviously it’s an accomplishment…but we’re Bosco. We aim to be the greatest each year, and we did that this year.”

For the first time with this senior-heavy core of stars, they are sitting atop the high school football world with the season wrapped up. What a perfect way to send out an elite senior class that won this championship with their legacy on the line.