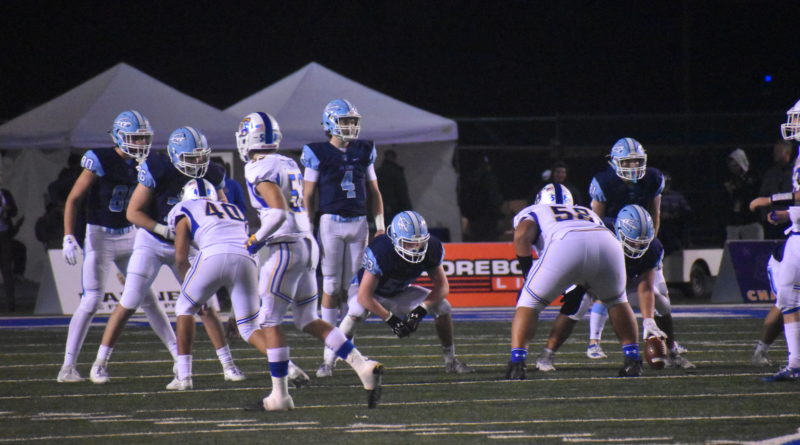 CERRITOS— Corona del Mar’s season has come to a close in the best way possible—as an undefeated 16-0 state champion. The Sea Kings pushed the envelope for most of their 35-27 victory over Serra (San Mateo), and got enough separation when they had momentum to hold up when everything came crashing down as the final minutes wound down. Here are 5 takeaways from the final game of their perfect year.

BACK WHERE IT ALL STARTED

Well, here we are again.

Ethan Garbers continued doing what he’s done all playoffs, which is pass the ball at an elite level like he always does while also punishing defenses for daring him to run. He led the game with 255 passing yards and four passing touchdowns on 28 of 41 completion, while also running for a touchdown and 142 ground yards. His passing touchdowns came to Bradley Schlom, Scott Giuliano, Schlom, and John Humphreys. Mark Redman also had a great game at tight end and actually led CdM with 95 receiving yards even though he didn’t get any touchdown passes.

Garbers’ evening put him into exclusive territory with over 5,000 passing yards in one season. And his passing touchdowns put him at 71, meaning he now holds a new Southern Section record.

CdM’s defense came undone in the fourth quarter (more on that later), but still had a strong enough night to contain an explosive scoring squad in Serra. It was the usual suspects at the top of the list—OLB Mason Gecowets and S Tommy Griffin led the Sea Hawks with seven tackles each. LB Cole Rener and CB Chandler Fincher, who had a key interception, had strong nights. It was Corona del Mar’s 16th strong all-around effort on defense in 16 tries.

Serra had a strong enough defensive night to contain CdM better than most. Their quick secondary led by Terence Loville and Liam Kilbridge made the Sea Kings work for almost every single reception and yard. Their offense was a mixed bag but sophomore quarterback Dominique Lampkin was the brightest spot in only about nine minutes of action, in addition to Loville who had two receiving touchdowns at WR. We will elaborate.

The game appeared to be over when Ethan Garbers found John Humphreys in the end zone with 5:12 left in the game. CdM had a three-score lead and all the momentum. Serra’s starting QB, senior Daylin McLemore, broke his collarbone in Week 9 and unexpectedly was cleared to return for this game despite fighting through immense pain and less than a clean slate to work with. McLemore gave it a great effort, completing 16 of 18 passes for 159 yards and also ran for a touchdown.

That said, McLemore was not 100%, and Serra only had two scores on the game with him under center through over three-and-a-half quarters. After some rough hits, he wasn’t able to go, and Lampkin, who had been shining as his replacement during his absence, came in.

The first possession Lampkin was in, Serra didn’t get very far, but then they got going. Lampkin led the ensuing drives for touchdowns, scrambling furiously and injecting life into the Padres single-handedly at times. He reeled off one drive with a touchdown pass to Loville followed by a successful onside kick, and the next drive he capped off with a touchdown pass Matt Rollandi with 2:43 left. Then the Padres forced a punt and got the ball back down 35-28.

Lampkin again took them down the field and had no choice but to go for the end zone from about 20 yards out with time expiring. Except this pass landed in the hands of Tommy Griffin with only two seconds left, and the season was over.

Corona del Mar faced zero adversity in their dominant regular season, but had to deal with close calls throughout all three of their last playoff games against Grace Brethren in the Division 3 finals, Oceanside last week, and now Serra.

“I think all those playoff games where we had to face adversity really prepared us for this game,” Gecowets told Scorebook Live after the game.

“When it came time, none of our guys were nervous, and we knew we were going to do our job.”

“I wanted this so bad, all these guys wanted it, and every single kid in this program did their part. I just had faith.”