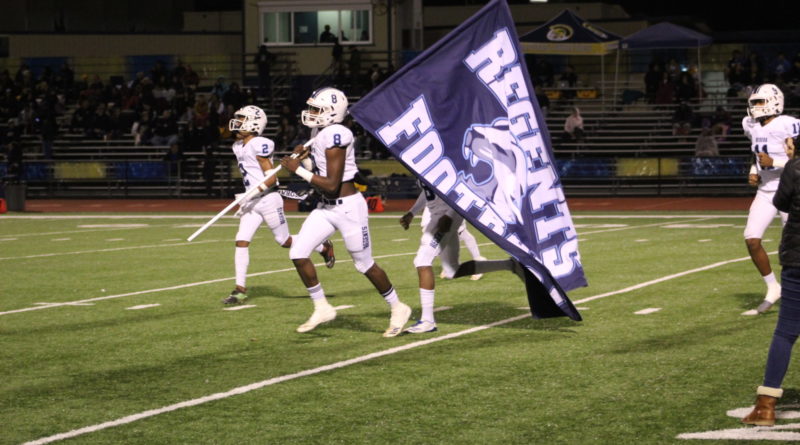 A four play first half sequence effectively ended the Regents’ state title dreams. With 12 seconds left in the first quarter, Milpitas running back Josue Torres scored a 12-yard touchdown to put the Trojans ahead 7-0.

On the ensuing kickoff, Milpitas kicker Nate Miskella brought out his sand wedge and pooched the kick high into the air. Reseda muffed it and Milpitas recovered. One play later Torres sprinted 41 yards for another Milpitas touchdown. After being seconds away from ending the first quarter tied 0-0, Reseda trailed 14-0.

At the start of the second quarter it got worse for the Regents. Reseda fumbled another kickoff and Milpitas dove on the football again. The Trojans scored their third touchdown of the night a few plays later. In a blink of an eye it was 20-0.

In past games this season Reseda has been able to use the athleticism of quarterback Trent Butler and receivers Mario Martinez and Dranel Rhodes to overcome miscues. That didn’t happen Saturday.

Milpitas’ physical defensive line made life miserable for Butler all night. Linebacker Aneterea Lealao sacked Butler twice and the Reseda QB was hit constantly by other defensive linemen. One of Butler’s strengths is his mobility, but when he was able to buy time against Milpitas, Martinez and Rhodes were always covered. The two Reseda big play threats combined for zero big plays in the game.

Reseda made two red zone trips on the night and both of them ended with failed fourth down conversions. On the two plays, Butler twice scrambled for the yard to gain, came up short and got hammered. A knee injury forced Butler to sit out the Regents’ final offensive plays on Saturday.

Mix Milpitas’ defensive domination with their strong attack on the ground, Torres finished with 218 rushing yards and four touchdowns, and you get a lopsided 34-0 state championship game.

Years from now, Reseda’s season will be remembered for the team’s great Sectional and Regional championship triumphs. Regent faithful won’t be too quick to bring up the state championship game though.