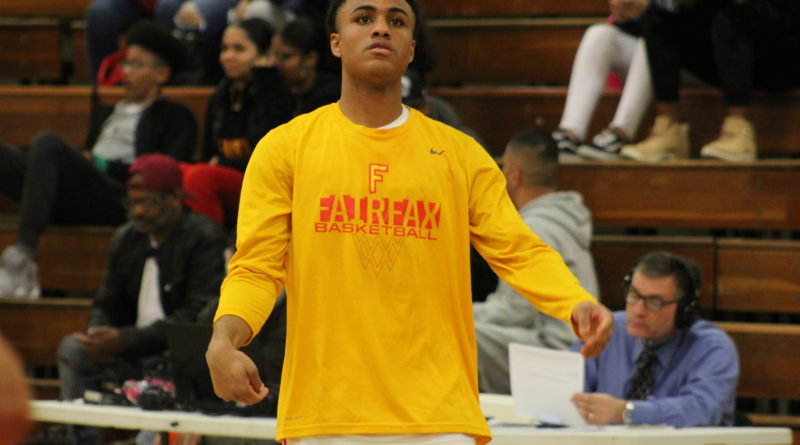 LOS ANGELES — Another chapter in arguably the best rivalry in Southern California high school boys basketball ended in victory for Fairfax on Friday night, as the Lions rolled to a 75-64 win at Westchester.

The atmosphere before the game was electric. So much so that perhaps the excitement and anticipation of this matchup got to the players a bit as both teams were careless with the ball to start the game.

The activity and comments in the crowd were more enticing than the actual game itself, as both teams had more turnovers and missed layups than points through the first four minutes of the first quarter. After a low scoring opening quarter, Fairfax began applying pressure on the defensive end, which led to easy points on the opposite end.

With six minutes left in the second quarter, San Diego State commit Keith Dinwiddie took the game over, hitting 3 three-pointers within a minute, extending Fairfax’s lead to 11. Dinwiddie ended up leading all scorers with 22 points, but also got a lot of help from Justyn Hunter. Not only did Hunter help lead the Lions’ second-quarter surge on the scoring end, but he was active on the glass as well. Hunter finished with 14 points and 6 rebounds for the night.

“That’s what we do. Me along with everybody else on the team strives to do whatever it takes to get a win,” said Hunter. “We don’t really focus on stats, we just worry about playing the right way.”

Despite a manageable halftime deficit, Westchester could not figure out a way to string a run of good possessions together. They had ample opportunities and got most of them at the rim, but could not finish. Narbonne transfer Zion Sutton led a brief run for Westchester to cut the deficit to 11 with three minutes left in the game and it looked like the Comets were ready to make a comeback. However, they could not get enough defensive stops to get over the hump.

Fairfax dominated the game in stretches, but they still have a lot of work to do. The Lions struggled at the free throw line and definitely could have taken better care of the ball.

“We played a good game, but there’s always room for improvement,” said Hunter. “We need to rebound more, get after the loose balls, and we need to be willing to take more charges defensively.”

Westchester has even more work to do. They’ve got three talented scorers in TJ Wainwright, JoJo Johnson and Kymani Pollard and of them are difficult to guard 1-on-1. But individually they lack consistency, which was evident in this game as the Comets finished the first half with only 22 points.

The good thing about their struggles is that it’s very early in the season. One bright spot for the Comets was Sutton who finished the game with 18 points. He played fearlessly and is a nice addition to their scoring attack. Pollard and Johnson combined for 22 points and Wainwright added 13 of his own.

The next battle between these two will be January 29 at Fairfax.