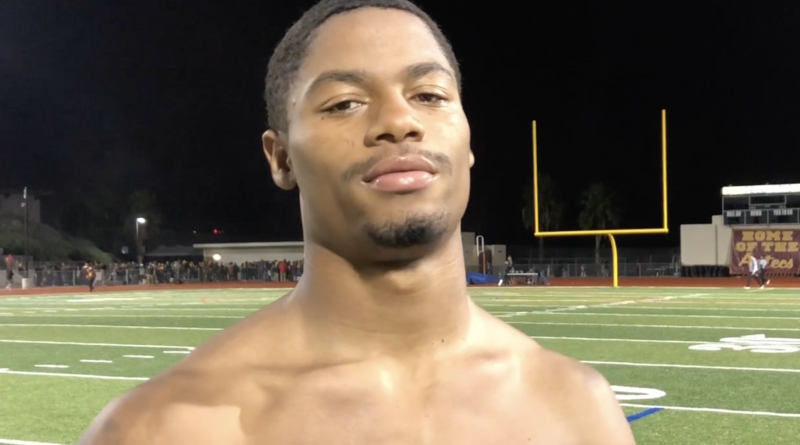 It’s the end of July and the sun is beating down on a Tuesday afternoon Reseda High School football practice. The team is doing conditioning — up-downs to be specific. The group jogs in place.

Everyone goes down for a pushup.

They bounce back up and continue to jog. The whistles keep coming until every player gets to 40 up-downs. The majority of the team finishes with the exception of a few linemen who look like they’d rather spend every day of the upcoming school year in detention than touch their bellies to the grass again. Finally, they finish too and plead for water from the team managers.

Working out in the back row, senior receiver Mario Martinez was one of the first players to wrap up in the group. His face is sweaty and stern; he executed the up-downs with anger, scowling the majority of the time.

Before ending practice, Reseda head coach Alonso Arreola huddles up his team and asks that his players help clean up the field. There are cones and empty water bottles sprawled from the 50-yard line to the near end zone.

When Arreola concludes making his request and the team breaks apart, Martinez bolts to the locker room. He was late for practice and is nursing a toe injury he suffered over the weekend trying to do a backflip.

“He’s 100 percent his own worst enemy,” Arreola says of Martinez.

“Want to see this new gun I got?” Mario’s twin brother Michael asked him.

Michael pulled the gun out of his backpack to show his brother. The two were sophomores living with their mother in an apartment in Reseda. For the most part, Michael had stopped going to school and was spending the majority of his time on the streets.

The two brothers had entered their freshmen years at Reseda with the intention of both playing football. Mario played and Michael quit. That decision led to a string of bad choices for Michael.

“He started off on his own lane in life, ditching school, smoking, fighting and all that,” Mario said of his brother.

Today, Michael is in jail waiting to be sentenced for an armed robbery. Mario hasn’t seen him in eight months.

“Mario has a genuine heart,” Arreola says after the summer practice. “The loving and caring kid is there, but there are so many scars.”

Martinez’s parents divorced when he was three. His father joined the army and hasn’t really been in either of his sons’ lives. Growing up, Martinez’s mother rarely had a job and was a heavy drinker. She could become abusive and would tell her boys that they were going to end up “in jail or dead.”

“I had a hard upbringing,” Martinez said. “It hurts, but everybody goes through something.”

“It was bad,” Mario said. “I would watch over my brother and it was bad. It got to the point where I wouldn’t go to school for weeks because he was getting into some stuff. That’s when I went into a dark place. I wasn’t working out as much as I wanted to and was around people I didn’t want to be around. They were doing stuff that I didn’t want to be involved in and I wasn’t involved in, but for me to be around it was tough. I’m not that kid.”

Michael was a gang member and the gang leaders wanted Mario to join too. Members of the gang wouldn’t leave Mario alone during this period so he eventually asked two Reseda football assistant coaches to speak with the gang to make it explicitly clear he didn’t want in. The coaches did and the coercion ended.

When Mario was 16, his mother moved in with her mother in Los Angeles. Despite still being under the custody of his mother, Mario began to bounce around the San Fernando Valley. He stayed with his teammate Dranel Rhodes’ family in Reseda for a bit before moving in with his older brother Warren in North Hollywood for a month. He then spent some time with a former teammate’s mother in Chatsworth and then eventually moved back in with Rhodes.

“From the age of 16 to 18 I was [doing a lot of] taking care of myself,” Martinez said. “I was never consistent in school because I always had other things outside of school to deal with, like my brother, gang-banging and my mom not having a job. Things that you’d never want to wake up to.”

As a junior, Mario was an All-City selection at wide receiver. He caught 39 passes for 769 yards and nine touchdowns. He also rushed for six scores and intercepted four passes on defense.

“I’ve taken a lot of losses in life, so when I come to the football field, really that’s the only place I’ve been successful consistently,” he said over the summer.

When Mario was on the field he produced, he just had trouble staying there. Like Arreola said in July, Mario was consistently “off.” He couldn’t control his emotions.

“We had to pull him in vital times of the games because he was a hot mess,” Arreola said. “We needed to go with the guys who had control. … He would sit for whole quarters. You want to do it your way, fine, but you’ll be sitting right next to us.”

“When my emotions come, they come, it’s like a hook and I’m knocked out,” he said.

It would be easy to judge Mario based on when he loses his cool on the football field. It can get pretty ugly. But most don’t know what’s gone on behind the scenes with the high-schooler that has caused him to repeatedly act that way. Mario has experienced more pain in his 18 years than many go through in a lifetime and there have been times when that trauma rears its ugly head in the form of a profanity-laced tirade or an aggressive blindside block.

You wouldn’t know that from seeing Mario in school though.

The undisciplined football player is nowhere to be found within the halls of Reseda High, especially when he’s working with special needs students, something Mario does frequently.

“All of those kids are my friends,” Mario said. “It messes me up when I see them sitting away from everyone else, like they’re not regular people. When I talk to them and they start smiling and hugging me, it’s a blessing.”

The Reseda football coaches and administrators know about Mario’s genuine heart, which is why instead of deciding to give up on him following one of his many outbursts on the football field, they devised a plan to help their star.

When the 2018 football season ended, a group of Reseda football coaches, teachers and administrators sat Mario down. They discussed his future and what he would have to do to play college football. The group made plans for him to enroll in summer school and SAT prep classes. They also vowed to work with him to help him better control his emotions.

“For me to have that help and not even ask for it, it gets me emotional,” Martinez said.

Mario now had a support system and although the last year hasn’t been perfect — he missed a couple of SAT tutoring sessions, was late for football practices in the summer and was suspended for the first round of the playoffs due to being ejected from a game the week before — he’s on track to graduate and will be competing for a state championship on Saturday.

“I was planning on being 18 and working at Foot Locker,” he said. “I’m 18 and colleges are looking at me talking about changing my life and my family members’ lives. … This all just happened this year. Last year my life was crumbling.”

In addition to having the Reseda staff push him, Mario credits a personal shift in his attitude for the changes he’s made in the last year.

“This is the year I really started caring for myself,” he said. “I always said what would my mom think or what would my brother think and never really made the best choices for me.”

Last week Reseda beat Esperanza 28-0 to advance to the CIF Division 5-A football state championship. Mario caught a touchdown pass and returned an interception for a second score in the victory.

“This playoff run, he’s been amazing,” Arreola said. “He’s held his composure and hasn’t reacted to bad things. We need him for that. I’m super proud of him.”

San Jose State and a few other schools are recruiting Martinez as the football season winds down. He won’t qualify academically until the end of the school year but a few programs are willing to wait on him, according to his coaches.

College football is the short term goal for Mario, but he has bigger plans after that.

“Twenty years from now I want a nice little house, a beautiful wife, beautiful kids, to send out the word of the Lord, donate, help people in life, become a teacher and change lives.”