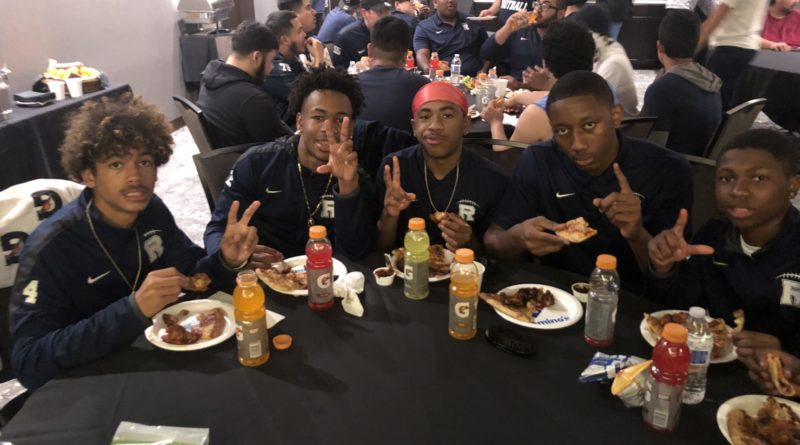 RESEDA TO MILPITAS — The Reseda football team left Reseda High School at 1:56 p.m. in a red coach bus on Friday ahead of their CIF Division 5-A state championship game against Milpitas Saturday night at 6 p.m. Scorebook Live California reporter Connor Morrissette accompanied the team on their trip. The Reseda convoy arrived at the Milpitas Holiday Inn at 7:49 p.m.

“Can somebody pass me the Mike and Ikes!?” a Reseda assistant coach asked.

Fully stocked with water, candy, snacks and Jersey Mike’s sandwiches, the Reseda football coach bus hit the road to Milpitas Friday afternoon. Coaches and managers sat in the front with the players filling up the rest of the rows behind them. I sat in the front next to Jose, the team’s videographer, for the first half of the ride. He studied for an Adobe Photoshop final exam he has next week.

For the first two hours of the ride, the bus watched the movie “Gridiron Gang” starring The Rock. It’s an inspirational football movie, perfect for a group of hopeful state champions.

When the movie ended, the bus pulled off the highway in Coalinga, 187 miles north of Reseda. Players and coaches chose between McDonald’s, Baja Fresh, Carl’s Junior, Subway and Taco Bell for an early dinner. The majority of the group piled into Micky D’s around 4:15 p.m. Players were instructed to return to the bus by 5 p.m.

With hands plugging their noses, the Reseda players watched “Happy Gilmore” (the smell went away after about 10 minutes) and then half of “Gladiator.” Just before 8 p.m., the bus pulled into the Milpitas Holiday Inn. The team was greeted by a group of excited parents holding Regent banners.

Before everyone exited the bus, Reseda head coach Alonso Arreola instructed his team to wait for room assignments in the hotel lobby. He finished his spiel by telling his group, “We’re under 24 hours away, let’s lock in and start acting like champions.”

From 8 p.m. to 10 p.m. players gathered in their rooms and relaxed ahead of a team dinner. I went to the first floor hotel restaurant to have dinner and ran into one of the parents of a JV player.

“This group is special,” he told me. “I go to a lot of practices and the kids on the varsity team sometimes finish first. As they walk off of the field, they always talk to me and are respectful. It’s a great culture.”

He finished his bacon cheeseburger and I scarfed down my shrimp scampi and we went our separate ways.

30 minutes later Arreola addressed his team again at the team meeting in the hotel conference room. He stressed how most teams would be happy with sectional and regional championships, but he wanted more from this group.

“We came here to do one thing and that’s to win a football game,” Arreola said.

The room full of parents, players and coaches then watched a ten minute highlight video that Jose put together detailing Reseda’s postseason run. It was a big hit, especially for the parents. As Eminem’s “Lose Yourself” played over the highlights, audible ooh’s and ah’s could be heard after every big hit and touchdown.

When the video ended and everyone finished eating, Arreola instructed his team to head to their rooms and wind down, they have a state championship to play tomorrow.

Saturday will begin with breakfast at 9 a.m. Look for more updates then.