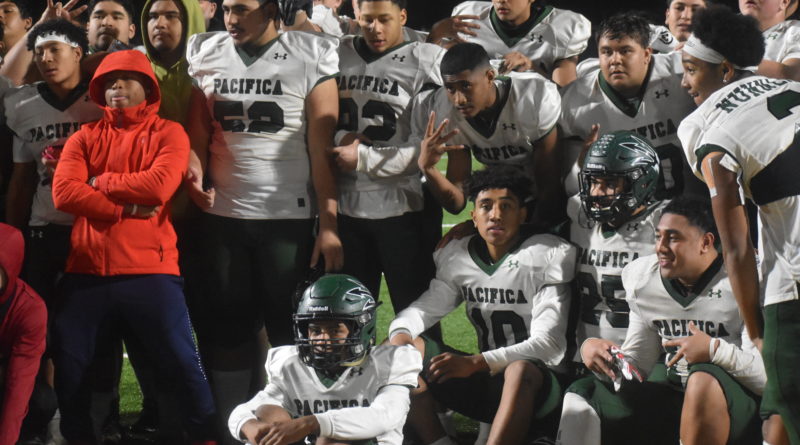 LAKE BALBOA – It got feisty quickly between Pacifica (Oxnard) and Birmingham Saturday evening in what seemed like a close game until early in the second quarter.

The L.A. City Section Division 1 champion, Birmingham, fought hard throughout most of the night, but it was the Southern Section Division 6 champion that won decisively. Pacifica was dominant on both ends and won 51-23 behind a number of strong individual performances. Here are five takeaways from the game:

Both squads brought energy right out of the gate. Birmingham got a touchdown in the first quarter when QB Jackson Dadich found WR Mason White. The Tritons scored ten first quarter points behind a rushing touchdown by Brad Bichard and a field goal.

With the second quarter starting 10-7, it seemed that it was going to be competitive for most of the game, and it got physical fast. That was around when the first extracurricular activities started. The game was filled with hard hits, personal fouls and other penalties, scuffles, trash talk, and warnings from the refs.

“Both teams were playing hard,” said Pacifica running back Malik Sherrod. “Both teams didn’t want to go home, so both teams were giving it our all. Maybe emotions got a little too high…that’s how the game goes. When both sides are competitive, you know that’s going to happen.”

That said, it seemed that the players left it out on the field, even if it took the whole game to do so, and there didn’t seem to be much lingering resentment. It’s football, and both of these teams are champions who had a lot on the line and didn’t concede an inch.

Pacifica turned 10-7 into 31-7 by halftime with QB RJ Maria consistently finding Nohl Williams and Kyrie Wilson. Their offense was dominant all game, and their defense was untouchable in the second quarter as well. It all happened in a flurry, and it was over by halftime.

Arizona State-commit Caleb McCullough is one of the more highly touted middle linebackers in the country, and he looked like it against the Patriots. His versatility was a major problem for Birmingham, as was the rest of the Tritons’ front seven. The secondary was strong too, with Williams leading the charge at corner picking Dadich twice in the first half. Fa’amaini Aina also had an excellent night cleaning up at strong safety.

Dadich threw for over 200 yards with two touchdowns passes to Boardingham and one to White. There were some stretches of the game in which Birmingham’s O-line was able to buy a bit of time against Pacifica’s brutal front seven. That’s more than can be said for many of Pacifica’s opponents.

Pacifica works hard to put on for their hometown of Oxnard, which has really embraced this talented Tritons core throughout their ascension over the past couple years.

“We come from a small area that doesn’t really get recruited, so [people] tend to overlook us,” Sherrod said. “We’ve made up for it…we’re trying to get everybody out that we can.”

TIME FOR PACIFICA VS. MCCLYMONDS

Pacifica is advancing to the state 2-A championship where they will face McClymonds from Oakland. Obviously there isn’t much to go on with both teams playing solely against opponents from opposite parts of the state, but it is likely to be a robust matchup.

At 14-1, the Tritons have to like their chances. And it bodes well for an exciting matchup that could be one of the most fun to watch of the playoffs.

“We don’t know what they look like, and we really don’t care,” said Sherrod, not in reference to McClymonds specifically but regarding any potential opponent in the state finals.

“Whoever steps up in front of us is going to get it.”