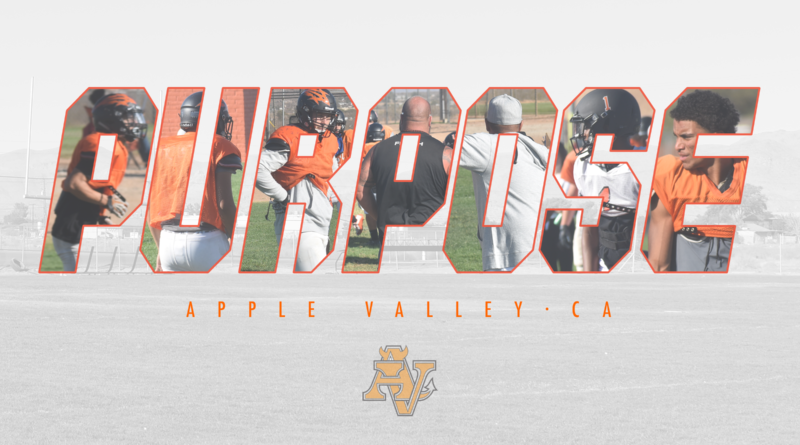 APPLE VALLEY – In the span of five years, the Apple Valley High School football program has grown from a playoff afterthought into a division title contender that continues to climb the Southern Section ranks.

The Sun Devils just completed a 9-1 regular season and made the Southern Section Division 6 playoffs, and their combination of talent and success is attracting interest from Division I colleges on the recruiting front as well.

On the recruiting front, the biggest news was when sophomore QB Jayden Denegal made headlines by picking up offers from Auburn and Georgia halfway through the year. Denegal had great production and outstanding efficiency throwing the ball. He finished with 2,154 passing yards, 33 passing touchdowns, and 68.2% completion on only six interceptions in the regular season.

He got the first offer around Week 5, in which Apple Valley won 26-7 against Adelanto. He remembers getting the news about Auburn when his father and his private quarterback coach texted him. UGA followed suit in short succession.

“It was super sudden,” said Denegal. “I didn’t know it was going to happen. It was exciting.”

Denegal, like the other top threats on offense for Apple Valley, would’ve had even more production on the year were they not blowing out nearly every team they faced.

The emergence of Denegal as a top-flight quarterback came at the best possible time for the Sun Devils. In their peak years of 2017 and 2018, they had one of the best quarterbacks the High Desert had ever produced in Jeff Widener, who now plays at Northern Arizona. Stepping in as a sophomore for Widener meant Denegal had big shoes to fill.

Denegal is one of several star players this year on Apple Valley who have played themselves on to college radars. Senior TE/DE Ryan Webster and senior SS/OLB/WR Jeremy Justice II have been getting college interest since over a year ago, with Justice holding an offer from Cal Poly San Luis Obispo and both of them in discussion with numerous D-1 and D-2 schools. RB Kenyard Edwards Jr. and WR Tyron “Ty-Ty” Smith broke out this season and quickly put themselves in position to play college football.

Edwards and Smith led all of Division 6 in regular season rushing yards and receiving yards, respectively. Smith caught for over 1,000 yards in the regular season and finished with 17 touchdowns. Edwards finished the year with over 1,500 rushing yards, 17 rushing touchdowns, two receiving touchdowns, and a kick return touchdown too. Both put up good numbers in somewhat limited action last season, but neither were the top option at their position on the team for a whole year.

Smith was third on the team with 600 receiving yards and nine touchdowns last year. Now he’s been getting D-1 attention from Pac-12 and Mountain West schools since spring/summer ball. He’s a college prospect primarily at wide receiver, but is also a strong contributor at FS/CB and for special teams, so he also fits the ATH classification.

Edwards transferred in last season without any film to show coming in. Playing as both a running back and a LB/DB hybrid, he was clearly out of place on JV, and quickly earned reps on the varsity team. Before the end of the year, he had cemented himself in the rotation. This year he was dominant, and reeled in a D-1 offer plus a lot more interested schools in Divisions 1 and 2.

Apple Valley has a strong internal bond as a community, and most of AVHS’s student-athletes grow up together as teammates and friends. The coaching staff coaches youth teams together as well so they know so many of the kids before they even get to high school. Smith is a great example of a born-and-raised Apple Valley product.

Smith and Denegal played peewee football together for two years before high school and have been friends ever since. Smith has been teammates and friends since fifth grade with two other juniors at the same positions in Marquis Cato and Ethan Peratt. Smith also played for their eighth-grade team that feeds in a lot of future Sun Devils, and already developed a relationship with the coaches before attending AVHS.

“The culture is very inviting,” said Smith about the football program. “It’s like a family once you get here.”

The Sun Devils often express their gratitude for their bond between the school and the community. Smith was one of a handful of players to bring up the example of how a large crowd from the town lines up every year to support the team buses en-route to the Bell Game against rival Victorville. They also get an escort from the fire department and police with the football team’s battle flags mounted on them.

“Most of the [residents] here went to Apple Valley. They’re constantly looking at the football team and how they’re doing,” said Smith.

“These past couple years have been the best we’ve been doing. They do a lot to show that they still care, and Apple Valley football still has a part in them.”

Edwards was a rare exception for the Sun Devils as a latecomer to the town. And he immediately was treated like family upon joining Apple Valley football, which he has a lot of appreciation for to this day. Knowing that he was going to be entering a reputable program that gets top players college looks was a major reason he embraced the move.

Despite going 9-1, injury-riddled Apple Valley drew a brutal first round matchup with San Jacinto and lost a 28-21 nail-biter. The Sun Devils were missing star TE/DE Ryan Webster and WR/DBs Ethan Peratt and Gavin Velasquez, and had been playing banged up for weeks, but they still nearly knocked out one of the division’s top contenders. San Jacinto went on to defeat undefeated No. 2 Kaiser 17-0, and then lost to La Serna by a touchdown in the semifinals. La Serna only lost the title game to Pacifica (Oxnard) by one point – that’s how small the separation was from the top.

Losing a potentially winnable game with some top players perhaps a week away from returning is a painful way to end what was another excellent season during the program’s best run ever. Until just a few years ago, 9-1 seasons didn’t come around at Apple Valley, who was in Division 10 and struggling to consistently make the playoffs. Until 2017, the Sun Devils hadn’t won nine games in a season, even including postseason appearances, since 2006. Now, including playoff games, the Sun Devils have gone 12-1, 10-2, and 9-2 the last three seasons.

Since Matt Rohrbaugh took over as head coach after the 2014 season, one-word mottos have become a critical rallying and organizing force for the team. “Purpose” was the phrase this season. To the players, purpose is about making the hours of year-round training pay off. It’s not enough to just go through the motions.

“For me, elevating my game more because I’m playing to have fun.”

Purpose also can involve goals that go farther than high school for some players on the team.

“The big goal is, after high school, what are you going to do next? For [the team’s college prospects] there’s also the purpose of getting to the next level, getting to do better for your family and for yourself,” Smith said. “It’s a huge key we’re constantly grinding in the weight room and on the field for.

“Truthfully around here, football never stops. Once we lose at the end of the year, we get like a week or two, and then we’re instantly back to it. Sixth period. Running, going through plays with whoever we have.”

The strong senior class led by Justice and Webster will be missed by the Sun Devils, and the seniors will also miss being a part of the program.

“It’s emotional. When you become a senior, it’s like it’s your last everything,” said Justice. “Your last week one, your last Bell Game, your last league-opener. Last playoff run as a high school player.”

As much as football is a focal point of his life, it’s the people he will miss the most.

“I’ve never had a team like this that I could really call my family,” said Justice. “We’re friends outside of football, and everyone on this field is one of my brothers. I’m very thankful for that.”

“The hardest thing is going to be leaving all my brothers on the field,” Webster concurred.

“This bond that I’ve built with them throughout the years is one of the closest bonds you can have in your life,” said Webster. “Honestly, it’s going to be hard to leave it.”

Ultimately, everybody who plays high school football will one day be forced to move on. With the young talent up and down the roster and outstanding program infrastructure that coach Rohrbaugh and his staff maintain, there’s no reason not to think that Apple Valley is still on the rise, despite losing some key contributors on and off the field.

“A bunch of us believe that next year we can be the best Apple Valley football team to ever come out of this High Desert,” said Smith.