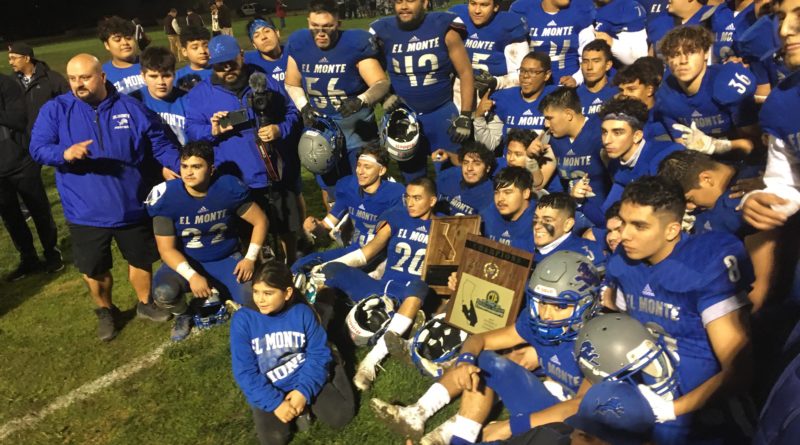 EL MONTE– Without completing a single pass on the night, Davon Booth and the El Monte Lions did Friday night what they’ve done all season–run over everybody in sight, both literally and metaphorically. 15-0 El Monte is one game away from completing their undefeated bid with a state title.

The Lions, and their double-wing offense that is quickly becoming infamous, are the CIF Southern Section Division 12 champions and now the 5-AA Southern Regional champions too. They knocked out Serra (San Diego) in a fairly close game in front of both a sold out home crowd and a host of attendees lined up at the campus’ fence. Here are five takeaways from the game.

Not all games have an identity, but this one was defined by smash mouth football on the shoulders of strong, athletic rushers who can take a hit and keep going. Every touchdown and two-point conversion for both sides came on the ground.

El Monte scored 30 points without catching a pass all night, and had well over 400 rushing yards courtesy of RBs Davon Booth and Abel Cueva. Serra had some aerial presence behind quarterback Timmy Zebroski, but they prefer to run the ball as well, and were overall more effective on the ground this game behind RB Dustan Ellison, Zebroski, who is a dual-threat, and FB Willie Peterson. The Conquistadors were aided by a couple strong kick returns as well.

Additionally, not only was this game a war on the ground, but all the rushers named were taking blows and carrying piles of defenders but still going strong. The amount of pileups that were still moving after five or ten seconds was staggering. The ability of the rushers to run through the defenses, not just around them, was fun to watch and critical to the game.

The effort was all-around for El Monte, but as usual, RB/DB Davon Booth stole the show. He went for 315 rushing yards, three rushing touchdowns, and three two-point conversions on one side of the ball, and sealed the game with an interception on the other.

RB Abel Cueva also had a strong performance with a key 52-yard rushing touchdown and nearly 100 rushing yards. The Lions’ offensive line was great at both creating openings and decoys for Booth and Cueva, and also in continuing to push them along in their runs.

El Monte has great size on their offensive line, but run quite small on defense. Their front seven was challenged by Serra’s large offensive line, but they made up for it with execution across the board. DBs Booth and Isaiah Ariza both had an interception and led the charge in keeping Serra ineffective in the air.

Serra ran the ball well, with Ellison finishing with two touchdowns and Peterson finishing with one. Zebroski picked up a lot of yards on keepers. Their offensive line was exceptional as well. DB Mark Genevich picked up an interception in the end zone on a rare pass by El Monte with the second quarter about to end.

Part of what makes El Monte so difficult to play against is that they torture opponents with long possessions and few turnovers. It’s the product of a run-game that just about always scores and usually does so on slow, methodical drives. Serra’s offense put up three touchdowns but never got into a rhythm because of both the Lions’ strong defensive effort and also how much time they had to go in between every possession.

How is El Monte so effective offensively even though everyone knows they almost literally never pass the ball?

“That comes from the O-line,” said Cueva after the game, referencing both the main five and also the fullbacks and tight ends.

“They’re always in the weight room every day pushing the weights hard. Honestly, if it wasn’t for them, we wouldn’t move. They’re the heroes of the team. They’re all my brothers and I just want to thank them for everything.”

El Monte plays on a grass/dirt field, and a lot of their opponents–especially from private schools–aren’t used to it. It rained briefly around halftime, and from then on, pretty much every single player on the field at all times was eventually covered in mud. It didn’t affect the game, but it was a debacle given that there haven’t been a lot of rainy game days this season in SoCal high school football.

With El Monte up 30-18, Booth picked off Zebroski with 3:24 left in the game. A touchdown and a stop would’ve been unlikely for Serra already the way the game was moving, but not impossible until that interception. Once the Lions got the ball back up two possessions that late, all they had to do was manage the clock reasonably well and avoid fumbling.

After winning their first division championship since 1930, El Monte has a chance to win their first CIF state title. They’ve already cemented themselves as the best Lions team of all time, but one more win will lock in an undefeated state run.

In addition to the CIF postgame award ceremony and some moving words from their coaches, El Monte got congratulated from town mayor Andre Quintero.