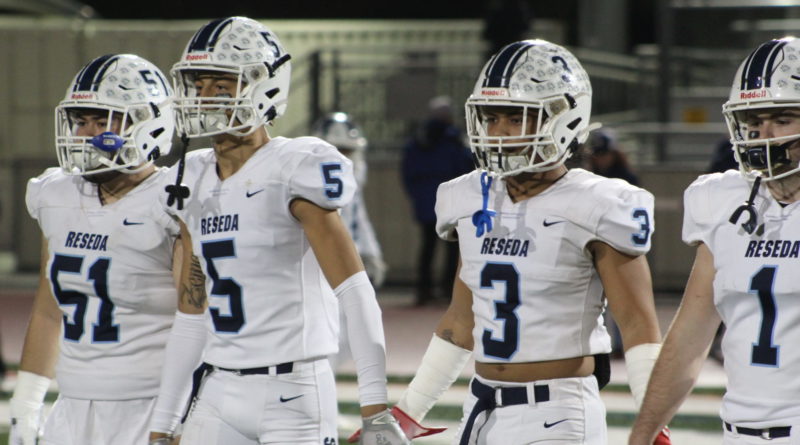 The text read: “Tell Alonso I said congratulations. He’s one of the class acts in LA City Section football.”

For the last 14 years Alonso Arreola has been the head football coach at Reseda. This year he’s led his team to Sectional and Regional championships, the first titles of his tenure.

“I’m a little on the emotional side,” Arreola said Saturday.

The coach bleeds Reseda blue. Arreola played football at Reseda and now teaches there in addition to coaching. He’s developed a unique family environment within the football program. Many Reseda kids know the staff well before they enter high school. Senior Dranel Rhodes has been around the coaches since his older brother Leonard played at the school nine years ago. It’s common to see younger siblings of players at practice.

“Reseda is very family-oriented,” senior receiver and defensive back Mario Martinez said Saturday. “Because of that, I try my best to give back to the school.”

Arreola is a players’ coach who is beloved by his team.

“We have done something really special and ultimately I wanted to do it for Alonso the most,” senior quarterback Trent Butler said. “I couldn’t be more grateful to have a man like him in my life.”

Arreola is the type of coach who helps kids with SAT prep and understanding what classes they need to take in order to graduate on time. He’s an expert at dealing with players who come from broken homes. Arreola is a mentor, guidance counselor, confidant, teacher and coach all rolled into one. He earns his annual $2,811 LAUSD coaching stipend monthly.

Coaching in the City Section is hard. In addition to the little pay, coaches deal with players who have had all sorts of different life experiences. One Reseda player has a twin brother who is in jail. Another has bounced around apartments due to his family struggling financially. There are times when the last thing these kids care about is football.

But Arreola and his staff still get through to them.

“These are the type of kids that are go, go, go and we have to reel them back in,” Arreola said. “I’d rather have a group like that instead of a group that I have to fire up every week. This team is special.”

Reseda will play Milpitas High in the Division 5-A state championship next weekend. No matter what happens in that game, the 2019 Reseda football season will go down as one of the best in school history and Arreola deserves a lot of the credit.