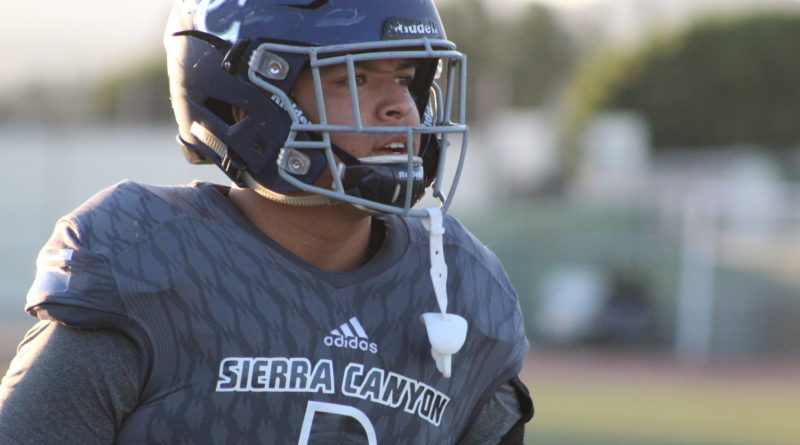 Sierra Canyon (13-1) and Helix (11-1) face off in the CIF D-1AA Southern California Football Championship Bowl Game on Friday at 7:30 p.m. at Helix High School. The winner will advance to face the D-1AA NorCal champion — Central or Oak Ridge — in the state championship. Here’s a game preview:

No strangers to this time of year, Helix and Sierra Canyon have combined for five appearances in the CIF State Playoffs since 2015. Helix is in after taking down Carlsbad in San Diego’s Open Division championship two weeks ago. Sierra Canyon defeated Chaminade this past weekend in the Southern Section’s Division 2 championship.

Helix lost star running back Elelyon Noa to a foot injury at the start of league play but were able to insert sophomore Christian Washington who has made his mark as one to watch for the next two years in San Diego.

Sierra Canyon dropped an early season contest to Oaks Christian, 21-14, a team that Helix took down 42-17, only three weeks later. The Trailblazers rebounded from that loss and proceeded to take down several of the Southern California’s top teams on their way to a section championship.

Both Helix and Sierra Canyon are well rounded and feature college prospects on both sides of the ball. Below is a look at the top prospects in Friday’s game.

Thrown for 2,885 yards this season and has thrown 17 touchdown passes to only one interception. He’s added four more touchdowns on the ground.

Offers from LSU, Arizona, Arizona State, Nebraska, Oregon, Rutgers, Southern Miss. 74 catches for 1,332 yards and six touchdowns on the season. 31 tackles and four interceptions for the Trailblazers. He also serves as the kick and punt returner and has returned two punts for touchdowns this season.

Offer from BYU. 804 rushing yards with twelve touchdowns on the season. Also has caught 40 passes for 473 yards and three touchdowns.

Has an offer from Southern Mississippi. In fourteen games this season he has 37 catches for 545 yards and six touchdowns.

Committed to Army. Has done a little of everything for the Highlanders. Has played quarterback and thrown three touchdown passes. Has rushed for 532 yards and seven touchdowns. Also, a standout defensive back and was named 1st Team All-San Diego Section.

Despite being on the offensive line, Martinez was recognized as the offensive player of the year in the Grossmont Hills league. No longer under the radar, he has the looks of a college prospect with still another season to play.

Scott moved in from Las Vegas just prior to the school year and quickly solidified his standing as one of the county’s top players. He finished the season as the Highlanders leader in receiving touchdowns with ten and grabbed four interceptions including a 2nd half pick-six in the section championship.

Committed to Utah State. Suffered an injury in week seven that cost him the season, but as a four-year varsity starter he went over 5,000 career rushing yards and passed Reggie Bush as the all-time leading rusher at Helix.