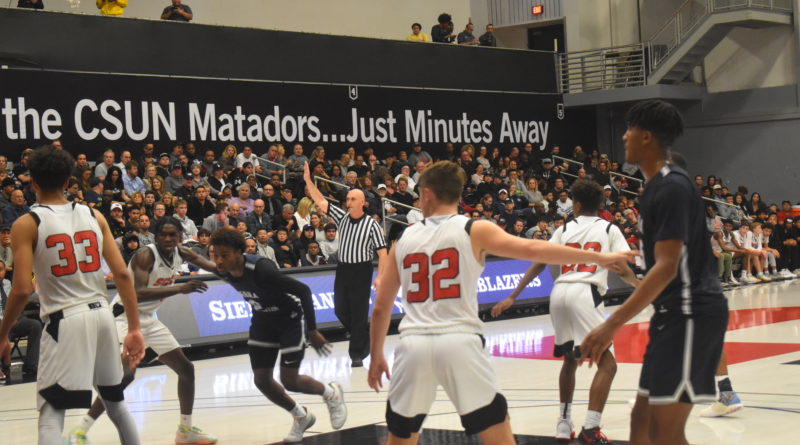 NORTHRIDGE– Sierra Canyon defeated Santa Clarita Christian 72-54 on Wednesday in front of a crowd of over 1,500 at Cal State Northridge. The Cardinals led for a lot of the first half and only trailed by one point at halftime, but Amari Bailey and B.J. Boston led a well-rounded effort for the Trailblazers who put the game away early in the second half. Here are five takeaways from the game:

6-3 combo guard Ty Harper, who already D-1 offers, torched Sierra Canyon for 18 points in the first half. He knocked down a handful of unassisted threes on the night, mostly in the first half, and was also finishing his acrobatic takes around the rim when he got inside. He finished with 28 points on the night, and was still feeling it in the second half, but eventually Sierra Canyon put Amari Bailey on him full-court and revved up their trapping schemes to get the ball out of his hands.

The Trailblazers didn’t come out flat, but their shots did. They got a lot of open shots both in the paint and especially outside of it in the first half, and they weren’t knocking them down.

Santa Clarita Christian had no intention of backing down despite being massive underdogs against a star-studded squad with a major advantage in length and size. They crashed the boards as a unit enough to compete and avoided turnovers for most of the game. Their ball-pressure and rotations were both pretty crisp, although they couldn’t contest Sierra Canyon much at the rim once the Trailblazers got inside on them. As a result, their 29 first-half points were enough to nearly go into halftime with the lead they had for the entire half.

Sierra Canyon erased the small lead in the second quarter and took off running in the third. They came out of halftime with lockdown defense and better shooting. Their trapping schemes started forcing more turnovers, and equally importantly, getting the ball out of Harper’s hands. With all the other Cardinals struggling to knock down open jumpers, Santa Clarita Christian couldn’t keep up.

The Trailblazers took a 51-38 lead with 2:02 left in the third quarter. Harper was starting to run out of gas and force it a bit, and Sierra Canyon was rolling. It was pretty clear that the Cardinals weren’t going to put enough points on the board to stay in the game, and that was with the Blazers just getting going from the field.

Harper and Bailey were the two best players on the floor in this one. Harper finished with 28 points, and Bailey finished with 23 points, mostly via attacking the rim efficiently in both halfcourt and transition settings. The two didn’t spend the whole game guarding each other, but took the challenge of guarding each other full-court for much of the game, and those were the stretches when they were most held in check.

B.J. Boston was also excellent on both ends for Sierra Canyon. He was the third-leading scorer in the game with 19 points, and provided some ball movement, rebounding, and defensive intensity. Once the Cardinals started having to guard him 20 feet out, it really opened up the Trailblazers’ halfcourt offense.

Terren Frank had nine points for Sierra Canyon, and Shy Odom and Bronny James each had six. Harold Yu had four points and was active on the glass.

For Santa Clarita Christian, Josh O’Garro put in 12. Kaleb Lowery had ten points and worked hard to compete in the paint against 7-3 Yu and the rest of the long, athletic Trailblazers squad. Other than four points from Jase Jones, nobody else scored for the Cardinals.

FLOOR SPACING A KEY FOR BOTH TEAMS

Sierra Canyon has a horde of elite rim-attackers, and Santa Clarita Christian will continue to compete at a high level on offense with Harper running the show and alongside Lowery and O’Garro. If the guys who play without the ball in their hands on both sides can space the floor more than they did tonight, both of these squads will be very hard to stop.

When the Cardinals remained cold from distance in the second half, Sierra Canyon really started loading up in the paint and they hardly scored again. It seemed that Santa Clarita Christian was going to do the same thing to them, but Boston, Bailey and co. got going and were from then on unguardable.

The Trailblazers are of course competing for a state/national championship, and have a collection of perimeter talent that is almost never seen at the high school level. The only thing that can stop them is failing to punish opposing defenses for hanging out in the paint.