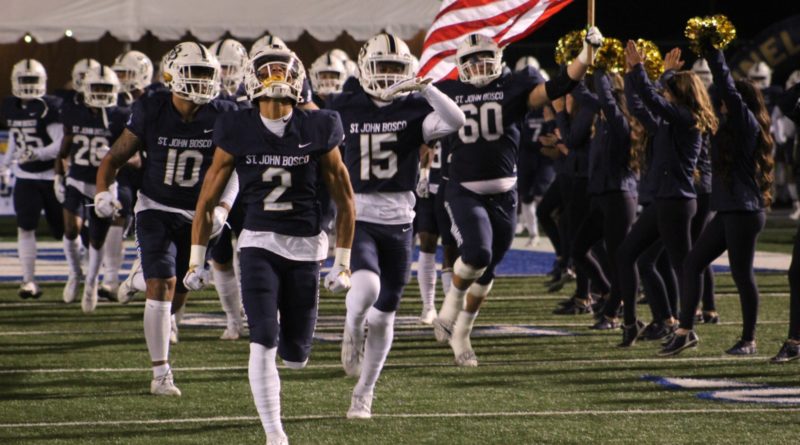 NORWALK– Some are already calling it “the comeback of the century”. Plenty of people will tell you that, given the circumstances and level of talent, it was a candidate for the best high school football game of all time.

Almost nobody who watched St. John Bosco defeat Mater Dei 39-34 in the CIF Southern Section Division 1 championship has been around long enough to witness every other high school football game of this caliber in our nation’s history, but the Braves coming back from 28-5 against undefeated, borderline-unstoppable Mater Dei might not conceivably be surmountable.

Here are five takeaways from the game for all the marbles between two rivals who happen to be the best two teams in the country.

COMEBACK FOR THE AGES

There might be a curse against all football teams who take halftime and/or mid-game leads with 28 points on the board. Especially in championships. We all know what happened when the Patriots trailed the Atlanta Falcons 28-3 at halftime in the 2017 Super Bowl. In a regular season college football game just two weeks ago, Oklahoma came back from a 28-3 lead against Baylor. There have been numerous other instances in recent years of teams with 28 points and a lead around mid-game falling short by the end of the game. This game was no exception.

Passing touchdowns from QB Bryce Young to RB/WR Quincy Craig and WR Kyron Ware-Hudson put Mater Dei up 14-0 only two minutes and 41 seconds into the game. This looked like a lock to be yet another decisive Mater Dei victory in which the damage is done right from the get-go. St. John Bosco’s secondary wasn’t keeping up with the Monarch’s passing game, which has been the case in every game Mater Dei has played all season. That includes when they defeated the Braves a month ago.

A couple minutes later, WR/K Logan Loya got the Braves on the board with a field goal, and improved defense from Bosco forced a safety immediately thereafter thanks to an intentional grounding call against Young in the end zone. The lead was cut to 14-5 with 5:04 left in the first quarter, and S Jake Newman picked Young off on the Monarchs’ next drive.

But Mater Dei took the momentum back and extended the lead in the second quarter. DE Tyler Narayan picked up a St. John Bosco and Young reeled off touchdowns to WRs Cristian Dixon and CJ Williams. With 4:36 left in the first half, Mater Dei had a 28-5 lead and every drop of momentum. QB DJ Uiagalelei found WR Kris Hutson for a touchdown with 30 second remaining in the first half, which put a crucial stop to Mater Dei’s run and made it a two-score game going into halftime. Even still, Mater seemed poised to run away with it going into the break.

It turns out that the Hutson touchdown was just the beginning of 34 unanswered points for St. John Bosco. After the touchdown that got Mater Dei to 28 points, Bosco’s defense–not Mater Dei’s–played at the highest level for the rest of the game.

They came out with a crisp, lively touchdown drive to start the second half that was capped off with another Hutson receiving touchdown only 83 second into the third quarter that cut it to 28-19. Dominant defense held Mater Dei in check as touchdown passes from Uiagalelei to TE Adam Awaida with 57 seconds left in the third and Logan Loya with 11:53 left in the game put the Braves up 32-28.

Awaida’s touchdown catch was only his third reception and second touchdown of the entire season. Loya’s touchdown was set up by a spectacular interception by DE Nathan Burrell who read a pass from Young in advance, loaded up in time to jump and tip it, and catch the deflection himself.

Perhaps the most shocking moment of the game was when the Braves proceeded to stop Mater Dei yet again and tack onto their lead with another touchdown from Uiagalelei to Loya with 8:52 left. Young led an ensuing touchdown drive capped off with a touchdown pass to Ware-Hudson to cut the deficit to 39-34, and the Monarchs failed to complete a two-point conversion.

Mater Dei had the ball again after forcing a turnover on downs, but Young fumbled it with 1:30 seconds left. The Monarchs forced a punt and got the ball back a little past mid-field with just under half a minute left, but St. John Bosco held them in check one last time. Young threw as perfect as possible of a Hail Mary into the end zone as time expired. Both teams had a horde of players in the mix for it, but it was Hutson at DB who pulled it down.

DJ Uiagalelei gets the game ball for his 444 passing yards and five passing touchdowns on zero turnovers. Despite a couple uncharacteristic dropped passes in the first half, which was reminiscent of the teams’ previous matchup, WRs Kris Hutson and Logan Loya were excellent. And Hutson’s work in the secondary and Loya’s work at kicker were both crucial too.

One of the biggest differences in this game from the last, if not the biggest difference, was from St. John Bosco’s offensive line. The Braves undoubtedly have one of the very best O-lines in the country, but for most of the season, Mater Dei’s was the best in the country. And when the teams played on October 25th, the majority of Mater Dei’s stops were largely in part to Uiagalelei lacking the time in the pocket afforded to Bryce Young. When Bosco surged in that game, it usually coincided with their offensive line stepping up.

This time, Uiagalelei had excellent protection for most of the game, even against Mater Dei’s dominant front seven that wreaked havoc last time. On this night, the Braves O-line, led by OT/C Drake Metcalf and OT Earnest Greene, was almost impenetrable, and looked like the best in the nation.

The Braves also held Mater Dei to 34 points, which was their lowest total of the season. What they did defensively in the last 55% of the game was incredible. It’s hard to point out standout individual performers in such a well-rounded effort, but OLB Ma’a Gaoteote, DE Nathan Burrell, CB Kris Hutson, and S Jake Newman were at the center of it. DT Kobe Pepe didn’t finish with his usual amount of tackles, but he ate up a lot of space and seemed to be a big point of attention from Mater Dei’s offensive line. Both the front seven’s pressure up front and the secondary’s ability to somewhat contain Mater Dei’s passing game were the most the Monarchs had faced all year. Bosco clearly focused on shutting down WR Kody Epps at all costs, and it worked.

It wasn’t like Mater Dei played poorly or collapsed on either end. They were just outdueled, but still played very well, even if it was not one of their best games of the year by any stretch. Young still finished with 405 passing yards and five passing touchdowns. What was uncharacteristic was that he turned the ball over five times if you include the safety, although the Hail Mary interception at the end really can’t be held against him at all. CJ Williams and Cristian Dixon both stepped up at receiver with Epps in check. Even with outstanding pressure from St. John Bosco’s front seven, Young still generally had a lot of space to work with thanks to the Monarchs’ O-line.

Defensively, the numbers say this was Mater Dei’s worst game of the season. Maybe it was, but holding the Braves to 39 in a game where they had so many possessions still indicates a lot of great work on that end. Dean Neeley and Raesjon Davis were among the linebackers who strong nights, and the defensive line put the work in. Mater Dei’s secondary wasn’t as strong as usual–which is as good as it gets–but still could’ve done far worse.

“Words can’t explain how fiery and pissed off we were coming into the second half,” said Metcalf, who’s not only a four-star recruit and Stanford-commit but also an energetic leader and tone-setter for the Braves.

“Down in the first half…just mistakes here and there, stuff we could’ve totally fixed. We went into halftime knowing these guys were beatable. We came out here, we just played a better game second half, and our guys rallied up front on the offensive line. We did what we needed to do.”

Per Metcalf, head coach Jason Negro gave them a message at halftime along the lines of, “Play like you mean it. Play like you’ve been beaten down the past two years against Mater Dei.”

“We were the better team,” Metcalf continued.

It’s no secret that Mater Dei’s offensive line has been the most dominant in the country for much of the season, and outplayed St. John Bosco’s O-line last time.

IT’S HARD TO BEAT SOMEONE TWICE

For three of the past four years, the team that has won the championship lost the regular season matchup.

St. John Bosco won the title game 42-28 in 2016 after losing 26-21 in the regular season. Last year, the Braves won the regular season meeting quite decisively, 41-18, but it was the Monarchs who won the championship, 17-13. This season, Mater Dei dominated the matchup for six quarters straight but both teams will mostly only remember the last two.