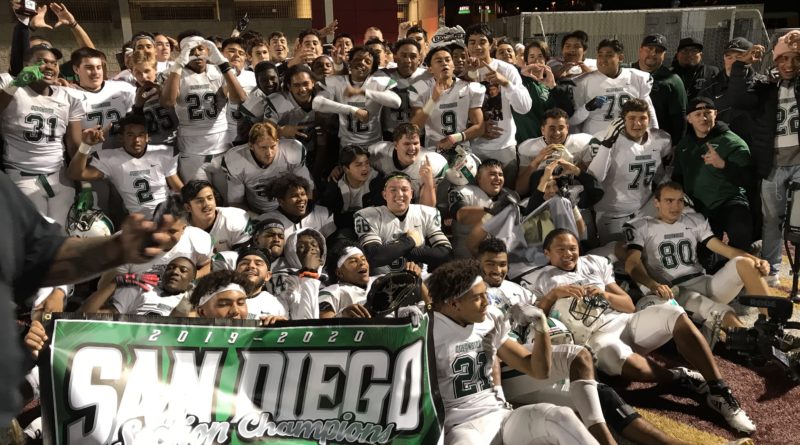 Oceanside’s junior running back Kavika Tua was the star of the night. He’d passed the 2,000-yard mark coming into the night and added to it with 155 total yards and two touchdowns.

“It really feels like we made a statement, and everybody showed out,” Tua said postgame.

Shawn Ramsey played a huge role in the Pirates defense holding Lincoln to their 2nd lowest offensive output of the season. The junior had eleven tackles, a sack, and also returned a fumble 55 yards to put the Pirates ahead for good.

“The biggest key was just to shut down their passing game… and it worked,” Ramsey said.

Junior wide receiver Tyrell Bellmon caught three passes on the night for Oceanside, but his last one sealed the victory for the Pirates. Bellmon caught a crossing route and sprinted down the Pirates sideline and into the end zone to complete the 51-yard play.

“All the folks and pundits that have all these opinions, we defied those, and we look forward to that,” Oceanside Head Coach David Rodriguez said. “We wasted a lot of people’s time, but it’s okay.”

The Pirates had an up and down year for most of the regular season but will be advancing into the state playoffs.

“I get to be with them one more week and that’s really my biggest treat,” Rodriguez said.

Down by eleven points early in the fourth quarter, Lincoln’s Chris Davila overthrew his intended receiver and watched as Oceanside safety Trejan Apodaca leaped into the air to grab possession for Oceanside. The Pirates Tyrell Bellmon for a touchdown a few plays later to officially put the game out of reach.

Oceanside lost their regular season finale against El Camino which caused them to drop down to the nine-seed in division one. The Pirates responded by winning three straight games on the road to work their way into the championship game.

“You know we actually prefer road games,” Kavika Tua said. “We like going over there and we feed off of the other crowd’s energy.”

The Pirates needed 26 unanswered points in the 2nd half to beat Steele Canyon in the quarterfinals two weeks ago.

“When we play on the road, I feel like we just play better, we lock in more and we’re just more focused on the objective,” said senior Jalen Ramsey.

The Oceanside team and community have had a tough week with the sudden passing of Christopher Laie Sr. earlier in the week.

His son Christopher “Kiki” Laie Jr, a senior defensive end for the Pirates, has had an excellent season with 10.5 sacks coming into the championship and was able to add two more on Saturday night.

“We played with our emotions on our sleeve, heavy for the Laie family,” Coach Rodriguez said. “We feel for them, we love ‘em and Christopher was able to compartmentalize all that and just play. I know his father’s looking down right now and he’s very proud of his son. It’s one of those where we rallied together because it’s more than just teams, it’s family for us.”