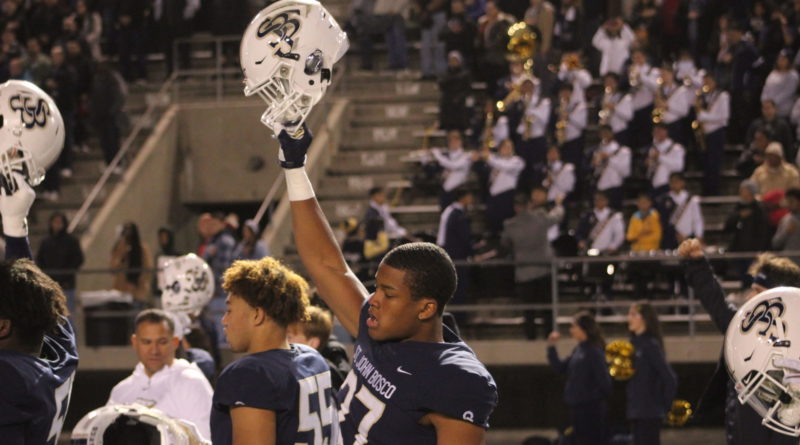 “I would have had to miss five practices and [Edison’s passing tournament],” Uiagalelei said in June. “For me, the end goal is not to win the Elite 11, it’s to win a state championship.”

“I’ve been looking forward to this for three years,” Uiagalelei said after throwing for 444 yards and five touchdowns. “We lost to them two years straight and I’m just so proud of my teammates. This was a total team effort tonight.”

HOW ST. JOHN BOSCO GOT IT DONE

St. John Bosco’s defense made Mater Dei quarterback Bryce Young uncomfortable, something that hadn’t happened once this season, until Saturday. Young threw three interceptions, fumbled the ball twice, losing one, and committed an intentional grounding penalty in the end zone, resulting in a safety. He was also sacked a season high four times.

In their regular season meeting, Young was unstoppable completing 19 of 33 passes for 256 yards and three touchdowns in a 38-24 Monarchs’ victory. Young ran for two scores as well in that game.

Young was by no means bad on Saturday — he threw four first half touchdowns — he just wasn’t his usual Superman self. St. John Bosco’s defense deserves a lot of credit for that.

On the offensive side, the Braves passing attack was what won them the game. Logan Loya caught 10 passes for 161 yards and two touchdowns. Kris Hutson hauled in two touchdowns too. St. John Bosco’s offensive line protected Uiagalelei better than they had in the first meeting against Mater Dei, which also contributed to the win.

The Braves got tight end Adam Awaida involved as well, which was key. He caught a third quarter touchdown to make the game 28-26 Mater Dei. Bosco rarely throws to their tight ends so that was another great wrinkle from the Braves staff to throw off their rivals.

St. John Bosco overcame a few first half mistakes to win the game. The Braves had two coverage busts resulting in Mater Dei touchdowns early on. They committed costly penalties, had some drops from receivers and lost two fumbles in the red zone. Bosco trailed 28-5 at one point in the second quarter and went into the halftime locker room down 28-12. The first half wasn’t clean and they still fought back to win. Lesser teams would have folded.

“If it wasn’t for our turnovers early in the game and some costly mistakes that we made, we might have had the lead at halftime,” St. John Bosco head coach Jason Negro said. “We made some great adjustments in the second half and at the end of the day we made enough plays to win.”

The Braves felt like they played better than the score indicated in the first half and they used that belief to fuel their comeback. The game ended on a heave to the end zone from Young that Hutson intercepted as time expired. Despite Bosco’s brilliant second half execution, Mater Dei was one play away from a win. That’s what made the game so incredible; it wasn’t over until the the final seconds ran out in the fourth quarter.

This was such an important win for St. John Bosco for a few reasons. Last year was supposed to be their year and after beating Mater Dei 41-18 in the regular season, the Braves dropped the Southern Section championship 17-13 to the Monarchs. It was a heartbreaker.

A month ago in the regular season, St. John Bosco lost again to Mater Dei 38-24. Following that defeat, it seemed likely that this year’s St. John Bosco senior class was going to lose three straight Southern Section championships to their arch-rivals. For a program that competes at the national level, falling short of a CIF title in three straight seasons is unacceptable. Mater Dei would have established itself as the clear top team in the Southern Section with another win. Instead, the pendulum swung back in St. John Bosco’s direction on Saturday. In the last four years, the two teams have each won two CIF titles. Even Steven.

This was big for Uiagalelei too. Obviously it’s a massive win for all of the Bosco seniors, but we all know it’s a little different for the quarterback, the position that gets all of the credit after wins and all of the blame after losses. The Clemson commit got over the hump by playing one of his best games in a St. John Bosco uniform on Saturday. Uiagalelei is the consensus top quarterback in the 2020 recruiting class, but he’s never cared much for individual honors. This win is worth more to him than any star ranking or scouting report.

Bryce Young’s Mater Dei career is over. Young had the almost impossible task of taking over for JT Daniels two years ago and he passed with flying colors. Like Daniels, Young will be remembered as one of the best high school quarterbacks to ever come out of Southern California. Fans will recall Young’s video-game-like ability and clutch nature years from now. Young’s career didn’t end the way he wanted, but it was a damn good one, one of the best this region has ever seen. Alabama is getting a great player.

Mater Dei will lick its wounds and began preparation for 2020 while St. John Bosco gets ready for a state championship game against De La Salle in two weeks. Even though both teams will lose their star quarterbacks to graduation, they’ll both be great again next season. It’s Mater Dei and St. John Bosco. If these two end up meeting in the Southern Section championship again in 2020, we can only hope it’s as great as Saturday’s game.