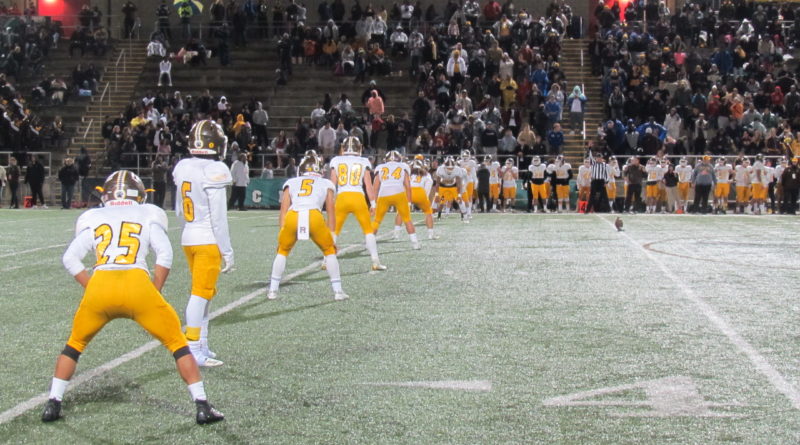 In a game that featured wild momentum swings, El Camino rallied from a 25-point halftime deficit to beat Bishop’s 75-59 in the CIF San Diego Section Division 2 championship game Friday night at Southwestern College. Here are five takeaways from the game:

Sophomore quarterback Kiah Reid took over for the Wildcats late in the season and has completely transformed their offense. In the championship he was 12 of 18 for 285 yards and five touchdowns. He also ran ten times for 65 yards and another touchdown.

Senior wide receiver Alexander Fetko caused problems for the Bishop’s secondary throughout the night. He finished with six catches for 200 yards and three touchdowns for the Wildcats.

Zion Jackson didn’t get a big share of carries for El Camino, but he made the most out of them. He carried seven times for 109 yards and two touchdowns.

Stamping his mark as San Diego’s top player, Tyler Buchner ended his junior season with a bang. The Notre Dame commit was 20 of 47 for 286 yards and three touchdowns. He also carried 18 times for 350 yards and five touchdowns.

El Camino’s offense was able to make several adjustments at halftime that allowed their come back.

“It’s just being able to run the ball and being able to give it to our playmakers in space,” El Camino head coach Michael Hobbs said after the game. “Allow our line to take control and just to keep the full throttle down on them.”

The Wildcats scored 39 unanswered points in the last fifteen minutes and fifty seconds of game play.

After El Camino evened the score at 59 less than a minute into the 4th quarter, Bishop’s drove down into the El Camino red zone. The Knights offense stalled forcing them into a 4th down attempt.

The shotgun snap was fumbled and eventually recovered by Bishop’s but resulted in a turnover on downs. With the Bishop’s defense wearing down, El Camino was able to score two touchdowns in the next four minutes to secure their championship.

El Camino struggled to contain Tyler Buchner in the first half, but their offense showed signs of life if they could string some second half stops together.

What changed for the Wildcats over those last fifteen minutes?

“Honestly, a quick mindset change. We’ve always done good in the second half and we figure out what to do to change our mindset for that game,” Kiah Reid said.

“We’ve been down at halftime multiple times throughout the year, we’re a second half team we just gotta keep playing our game,” Hobbs added. “We made a couple of adjustments, offensively and defensively and we felt those would help us finish out the second half.”

There’s so little that can be done to throw off a player the caliber of Tyler Buchner. His first half performance served notice to everyone throughout Southern California what his true skill level is.

After the Knight’s scored a touchdown late in the 3rd quarter, the Bishop’s sideline looked to just be out of energy. Playing a team with an enrollment of at least four times started to get to Bishop’s. El Camino was able to rush the passer with more success and as even able to grab an extremely rare interception against Buchner.

“Defense I know we struggled a little bit, but they came up big in that fourth quarter,” Reid said.