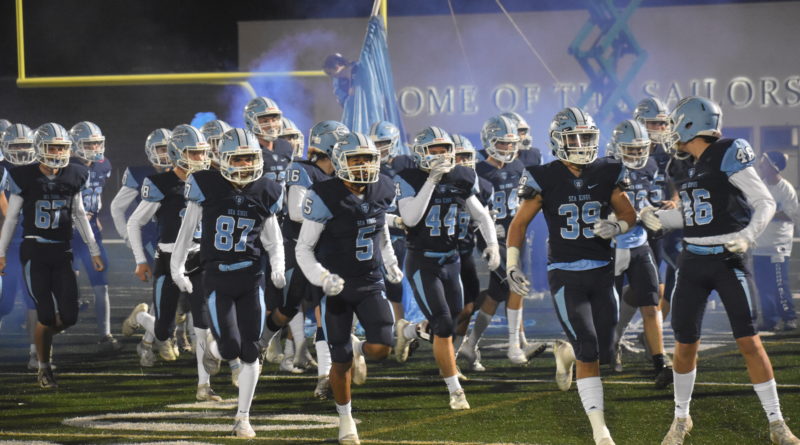 NEWPORT BEACH– Going into the CIF Southern Section Division 3 championship game Friday night, Corona del Mar had not been tested yet this season. They had won every game on the year by double-digits, and essentially every single game was a blowout from start to finish. The Sea Hawks were finally tested in their finals rematch against Grace Brethren, who defeated them 26-14 in the Division 4 finals a year ago.

But their record of 13 straight double-digit victories still stands, and is now up to 14. In fact, CdM had already pulled away from the Lancers once crunch time rolled around, and they won 56-28. Here are five takeaways from Corona del Mar’s sixth CIF title.

ON BOTH AIR AND GROUND

Nearly every high school football fan in Southern California knows that Corona del Mar has one of the best passing attacks in the country. The aerial unit of QB Ethan Garbers, WRs John Humphreys and Bradley Schlom, and Mark Redman was as dominant as always. But in the first half, the Sea Hawks ground attack stole the show.

Binnquist broke it all down after the game:

“[Grace Brethren’s] game plan was, they were going to play a four-one box. So that’s four down linemen, and a single backer. They were daring us to run the ball all game. Their coach said we couldn’t run the ball, we’re just a seven-on-seven offense, and that pissed our O-line off, so we had to show them that we could run the ball.

“And I think we did that pretty well today. We showed everybody, yes we can throw the ball, but we can also run the ball very well.”

It’s safe to say the Sea Hawks ran well. Grace Brethren has one of the most formidable rushing games in SoCal, but CdM actually finished with more rushing yards than the Lancers.

Garbers gets the game ball on offense for his 294 passing yards, four passing touchdowns, and three rushing touchdowns on 76.7% completion. Three of his touchdowns passes went to WR John Humphreys, who had a couple highlight snags. TE Mark Redman, who will be joining Garbers at University of Washington next year, had a receiving touchdown as well. Binnquist led the charge on the ground. K Dane Voorhees was eight for eight on PATs. Corona del Mar’s strong but relatively small offensive line played huge against an enormous Grace Brethren defensive line as well.

“They have the most heart you could possibly ask for,” said Binnquist of his offensive line.

“Yes, they’re undersized. They’re the fastest people I know. They get there way faster than the average O-linemen. They block hard and have the most heart out of anybody on the team.”

Defensively, the Sea Kings gave up a season-high 28 points against Grace Brethren, but that still certainly counts as getting it done. OLB Mason Gecowets led the team in tackles in what was a smooth all-around effort for CdM defensively, which is how things have gone all season. Chandler Fincher, Zack Green, and Ryder Haupt led the charge for a secondary that both shut down Grace Brethren in the air and helped up front a lot against the run-game.

Like their offensive line, Corona del Mar’s defense is relatively small in weight but very effective.

“Individually we’re not that big, but when we play together, nothing can stop us. We run to the ball every play, hit hard, and play physical every single play,” said Gecowets.

Grace Brethren was missing one of their best players, 3-star DT/DE and FB Soane Toia. Their biggest matchup advantage against CdM was in the trenches, where their size advantage was astounding. Toia not only was a loss in top personnel for the Lancers but was out in a game where he would’ve been able to do tons of damage on both sides of the ball.

“You could never ask for a better rematch,” Binnquist told Scorebook Live after the game.

“We wanted them all season. The second we lost to them, [they were] back in the weight room the next day working 364 days to get back to this moment. To rematch them, and put 56 up on them…I don’t even have words for it. It’s the best feeling in the world.”

“Last year they got the best of us, but we made sure that this year we wanted it more, and we played our hearts out…we made sure we were coming off the field with the rings.” said Gecowets.

The Sea Hawks were emotional and elated after the game, but the celebration was subdued because their aspirations go much farther than winning a division championship. Binnquist and Gecowets, along with the rest of the team, are very confident in their state title chances whoever they go up against, largely because of their belief in their coaches.

“We have amazing coaches, and they do a great job of giving us perfect schemes, and telling us exactly what we have to do to get that W,” Gecowets said. “And we just got to go out there and do what they say.”

“The coaches are going to give us a great game plan. We just follow that game plan and we’re totally fine. We’ll dominate like we always do, and just stick to our game plan, and we’ll be good,” said Binnquist.