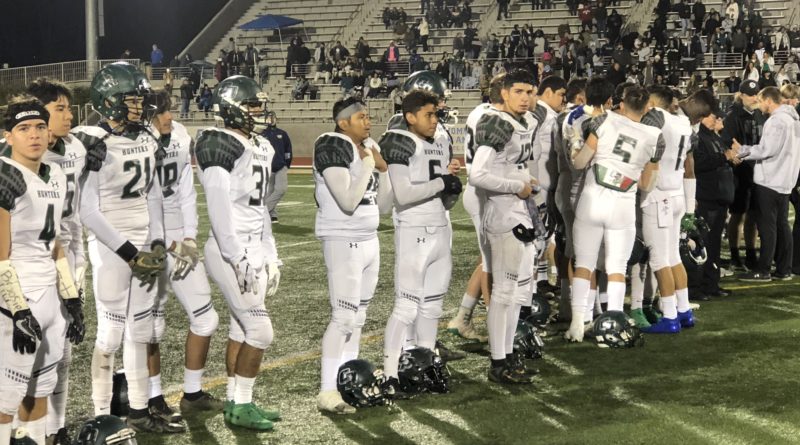 TORRANCE — Canoga Park did its homework in the days leading up to its LA City Section Division 2 championship matchup with Franklin.

“We study film all week. I’ve seen Bobadilla hold out the ball [at the goal-line] before,” Perez said. “I saw an opening and I just did what I was told.”

From there, the Hunters managed to see out a game they led 28-0 at halftime.

“We knew [Franklin] wasn’t going to quit,” Canoga Park head coach Kevin Carlsen following his team’s victory. “They came out a different football team, but in the end we buckled down when we needed to.”

Some teams would’ve given up after trailing by four scores at the half, but not Franklin.

“All I asked is that we come out and play with pride,” Franklin head coach Narciso Diaz said describing his halftime pep talk. “We played our two worst quarters of the season to start the game.”

Canoga Park built up its 28-0 lead on two touchdown runs from Jorge Hernandez and two touchdown passes from David Gomez to Joshua Christopher.

“The first quarter was great,” Carlsen said. The Hunters scored two touchdowns in the opening twelve minutes and looked unstoppable.

In the second half, Franklin defensive back Brian Pelayo intercepted a Gomez pass and returned it for a score. From there, Franklin quarterback Alfred Bobadilla threw touchdowns to Chris Quijada and Vincent Escobar to make the score 28-20.

With 4:19 to play, Franklin blocked a Canoga Park punt and recovered the ball inside the Hunters’ ten yard line. On second down and goal, Perez made the play of the game.

Canoga Park will play in a state bowl game next week after winning Division 2. The state bowl matchups will be released tomorrow at 1 p.m.