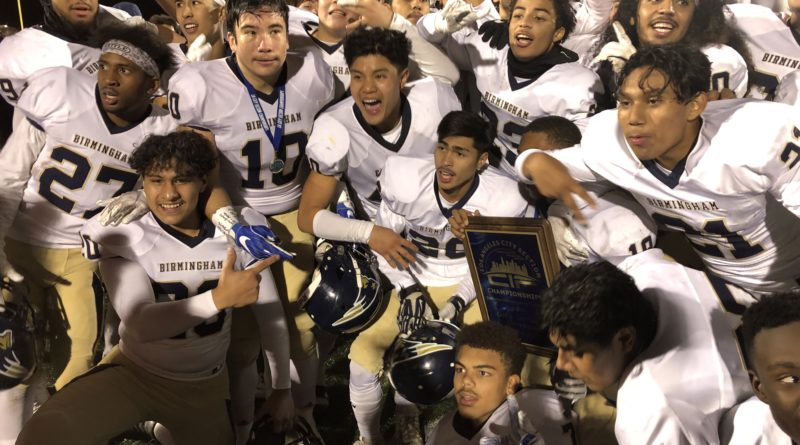 TORRANCE — Jackson Dadich threw three touchdown passes and ran for a key fourth down with a minute to play to lead Birmingham to a 27-20 win over Banning in the LA City Section Open Division football championship on Friday. Below are five takeaways.

HOW THE GAME WAS WON

With nine seconds left in the third quarter, Banning sophomore running back Jakob Galloway plunged through the middle of Birmingham’s defensive line for a two-yard score. Banning missed the PAT and trailed 21-20. In the fourth quarter, Dadich threw a beautiful 27-yard touch pass to Gonzalo Robledo for a touchdown to make the score 27-20.

Birmingham forced Banning to punt on their next possession and from there the Patriots ran out the clock to win the game. Dadich picked up the key first down from Banning’s 43 to clinch the game.

“That’s what was open,” Dadich said. “I had to take it into my own hands and get a first down to win the game.”

Dadich completed 11 straight passes at one point in the second half. He took two hard hits in the game twice resulting in 15 yard penalties against Banning. The junior didn’t let that phase him and continued to compete, leading his team to a title.

Banning senior receiver Mason White caught a touchdown and blocked a field goal. He also played well at defensive back. Robledo caught two scores for the Patriots, including the game-winner.

For Banning, quarterback Jake Otto rushed for over 100 yards and a touchdown. Galloway ran for two scores.

“That was a great football game,” Birmingham head coach Jim Rose said postgame. “Hats off to Banning. That game went down to the wire. Our kids have been resilient and they pulled it out.”

DESCRIBE THE GAME IN ONE WORD

That was a fun championship game. Birmingham led 21-20 after three quarters. The game was close from start to finish. Neutrals enjoyed the incredible athleticism of Birmingham receiver Mason White and Banning quarterback Jake Otto. There were big hits, beautiful touchdown passes and gritty touchdown runs. The Banning band made the atmosphere incredible. It was an enjoyable and competitive contest.

Although last year’s title was vacated, on the field Narbonne High had won the last five upper Division titles in LA City Section football before Friday. That streak officially ended with Birmingham’s win. Narbonne was disqualified from the playoffs during the last week of the regular season due to player eligibility issues.