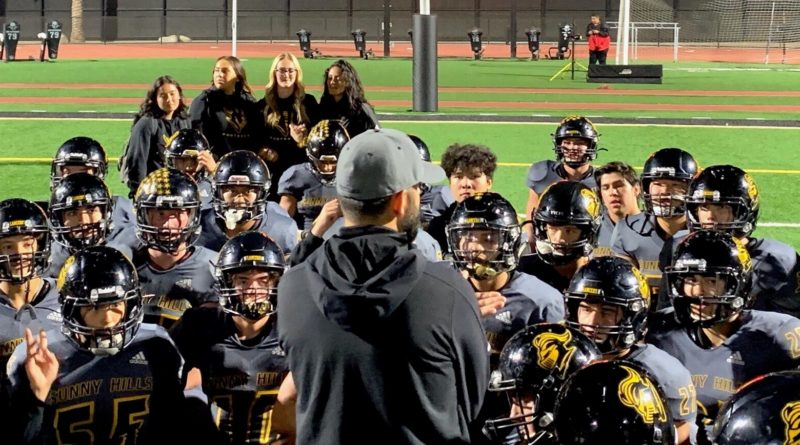 There are only three divisions in the CIF Southern Section in which the top-two seeded teams are in the finals. With No. 1 Sunny Hills and No. 2 Santa Barbara remaining rock-solid throughout the playoffs, Division 8 is one of them, along with Divisions 1 and 3.

Both squads are 11-2, and there’s not much to pick apart between them. Santa Barbara’s only losses all year came to Pacifica (Oxnard) and St. Bonaventure. Sunny Hills lost by one point to a strong Aliso Niguel squad to open the season and was blown out by La Habra in league play. That’s it for either of these squads.

They are roughly equal in the strength of the teams they’ve beaten as well, with Sunny Hills having defeated Brea Olinda, Trabuco Hills (twice), and Tustin, and Santa Barbara defeating the likes of Ventura, Palm Desert, and Palmdale. The Dons 37-15 rout of No. 3 Palmdale last week might’ve been the best win for either team on this season.

Sunny Hills runs the ball about three quarters of the time. RB Jun Ahn is the biggest threat, with 1,690 rushing yards and 26 rushing touchdowns on the season. Ahn also functions as a decoy a lot of the time. But he’s far from the only rushing threat on the team. Vince Silva has 638 rushing yards and ten rushing touchdowns. Brandon Roberts and David Harris are both strong options as well.

That said, they have a strong passing game behind QB Luke Duxbury, who’s efficiently thrown for 1,898 passing yards on the season with a great passer rating of 119.2. Wilson Cal is the main option at receiver with 927 receiving yards on the season, and Ahn, Silva, and Roberts all are strong threats to catch the ball when they aren’t running it.

Santa Barbara prefers to throw the ball behind Wisconsin-commit Deacon Hill, a pass-first dual-threat QB. They don’t have a distinct first option at running back, but Hill and RBs Ty Montgomery, Justin Perez, and Robert Boyton have all been options this season when it’s time to run, and they go to the run-game for touchdowns as much on the ground as in the air.

Both squads are very strong at linebacker, Sunny Hills even more so possibly. Carson Irons is up to 158 tackles for the Lancers, and Silva, Kevin Hu, and Noah Brown have 93, 85, and 69, respectively. Jake Massar is one of a few strong threats to rush the QB for Sunny Hills’ front seven. For Santa Barbara, Charlie Figueroa and John Valencia are standouts at linebacker. Dakota Hill leads an excellent secondary.

The numbers say these teams are extremely evenly-matched. If they faced each other ten times, they’d probably win five games each, but the fact that Santa Barbara is coming off such a resounding win against formidable Palmdale would be the biggest differentiating point if I were forced to pick between them. It’s anybody’s game.