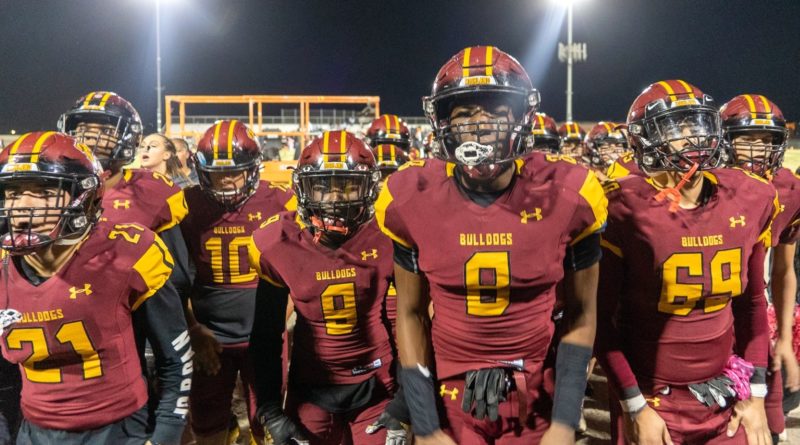 No. 2 Highland has been crushing teams left and right this season, and the ones they’ve overpowered in the last three weeks have been the best yet. The Bulldogs lost early on to St. Bonaventure and Serrano, and they also lost a heartbreaker by one point against rival Palmdale in league play. Other than that, they’ve blown everyone out.

That didn’t say a whole lot until the playoffs started. But their blowout wins against Bonita and Newport Harbor might be their best yet. They also took down Lakewood in the quarterfinals with room to spare.

It’s fair to call unseeded North an underdog in this game, but the 11-2 Saxons also have tons of momentum. They just shut out San Dimas, who was coming off one of the biggest upsets of the Southern Section season against Foothill. In addition to beating the Saints 14-0, North beat El Dorado and Palm Springs by a combined score of 83-10 in the first two rounds. They are both formidable, having cruised through a deep field up to this point.

The question for North was whether or not they were just a consistently strong team who cleans up all inferior competition but can’t compete at an elite level. The reason is that they lost to Inglewood and San Pedro by a combined score of 53-0, and otherwise have played an easy schedule. That’s why they didn’t get a seed or a ton of respect as a contender up until now. But whatever was the deal in those rough losses, they might be one game away from a title.

Both of these teams run it a bit more often than not, but overall have balanced (and strong) offenses. For North, RB Stephen Bradford is up to 2,023 rushing yards and 21 rushing touchdowns on the season. He’s also a threat to catch the ball from time to time. Toa Ortega has been a solid second option at RB as well this season as a sophomore. QB Trevor Ke’enan Lagarde has 1,845 passing yards and 27 passing touchdowns on the season. To do so with a passer rating of over 100 is very impressive for a freshman. Blake Banks is the top option at receiver, with Joey McCormack and Denzel Alexander also in the mix.

For Highland, RB/SB Isaiah Creech has been dominant all season, but his 243-yard, four-touchdown effort against Newport Harbor was his best game yet. That puts him at 1,794 rushing yards and 27 rushing touchdowns on the season. To make matters worse for defenses, he’s a major threat in the slot with 383 receiving yards and seven receiving touchdowns.

QB Damien Pecoraro has thrown for 2,131 yards and 28 touchdowns this season. Creech, Joshua Clark, Demarius Jamison, and Jaycob Spiteri all get roughly an even spread of the production and targets from Pecoraro in the air. This playmaking unit as a whole has been a touch more dominant this year than North’s.

North’s offense is strong, but their defense is their biggest asset. In their strong backfield, it’s some familiar faces. Banks shines at CB/FS, McCormack is a SS/OLB hybrid, and Bradford is a standout at CB. MLB Nicholas Cobos, DT Roman Garcia, LB Koa Carroll, and DE David Ukatu also anchor a strong front seven.

The Bulldogs hang their hat on an aggressive front seven with a lot of edge rushing threats. LB Daniel Brown and DE Darius Wilson lead the way with 124 tackles with 25 for loss from Brown and 84 tackles with 39 for loss for Wilson. LBs Brandon Farnetti and Jamal Jones are standout linebackers. DT Alberto Ortiz has also been a huge factor, with 56 tackles and 33 tackles for loss on the season. Creech leads the secondary as a strong safety who spends a lot of time up front.

Highland is a bit of a favorite, but it would be an understatement to say it could go either way. It definitely has a strong likelihood of being close. These teams are fairly similar in both play style and strength. This game should live up to the championship stage.