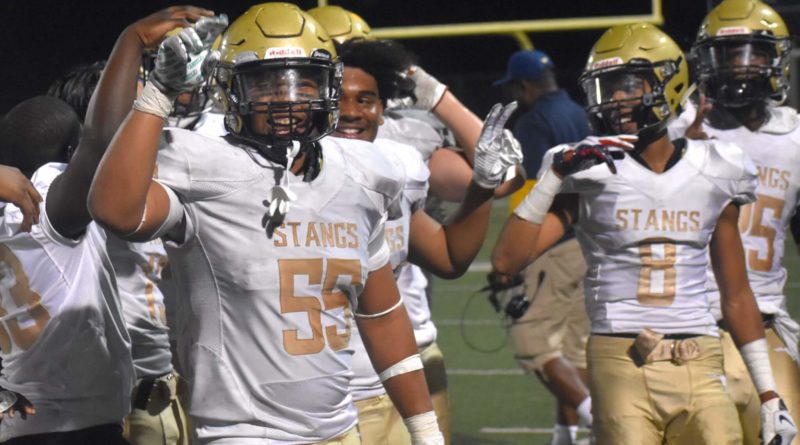 Like Crescenta Valley in Division 10, who ended their Pacific League title dreams late in the season, Muir (11-2) has often seemed out of place in Division 11. Other than losses to Grace Brethren and CV, they haven’t had a brutal schedule, but they’ve beaten Hart, Burbank, and sizzling hot Linfield Christian last week.

Marina is 11-2 like Muir, with losses coming to El Modena and Mead (Spokane, Washington). They too don’t have a ton of wins over great teams, but they’ve beaten some dang good ones such as Segerstrom and Katella in the regular season and surging squads in the playoffs in Ontario Christian and Hemet. But Muir will be the best team they’ve seen all season.

Muir rolls out two quarterbacks with well over 1,000 passing yards this season in Amaris Harrison and Erik Wallace. Harrison is a dual-threat QB and one of the team’s leading rushers, along with RB Tyrikk Lawson. Muir has a great receiving corps led by Calen Bullock, who has 15 college offers, and John Humphrey. Lawson also can catch quite a bit and Joseph Dolloway also has over 500 receiving yards this season.

Even if Muir has potentially the best offense in the division, what really makes them dominant is their defense. Their 29 points allowed last week when they beat Linfield Christian was the second-most for them all season. Humphrey is a high 3-star recruit at CB and UCLA-commit who leads a defensive backfield that rarely falters. De’Lon Reed, Asa Roberson, and 4-star junior Jamier Johnson are also strong CBs who sometimes see minutes at safety DT/DE Carlos Ramirez and DT Kamar Watkins lead an athletic defensive line that brings energy and aggression. MLB Chuck Shull and OLB Adrian Zepeda are also strong contributors in the front seven.

Just like Muir, Marina has two quarterbacks who get fairly equal playing time every game in dual-threat Gavin Del Toro and pro-style Jack Miller. Miller got injured two weeks ago against Ontario Christian and is a big loss if he’s still out, but Del Toro just went off for 277 passing yards against Hemet in his absence. Overall, their offense has a nice balance between passing and running. Pharoah Rush has a great name for a running back, and is Marina’s top ground option with 1,134 rushing yards and 13 rushing touchdowns on the season. Brantt Riederich has had a strong season as the Vikings’ RB2 as well with 772 rushing yards. Dane Brenton and Eric Curch are the top options at receiver with over 600 receiving yards each.

The Vikings have a whopping four players with over 100 tackles this season, and they rack up a good amount of TFLs and sacks. LB Nathan O’Rourke leads the way with 150 tackles on the year, and LB Connor Long and Ryder Malloy, and DB Eric Church are the others with over 100. DB Darren Vasquez is right there with 98 as well. Their defense has had a few stretches this season that weren’t dominant, but holding Hemet to seven points last week shows where they’re at in this point of the year. If they bring everything they got on defense, they have a chance at containing Muir enough to stay completely within range.

The numbers say Muir wins this in a fairly close one, and it will most likely be somewhat low-scoring. But Marina has been doubted all season, and they’ve never stopped coming back and proving people wrong. They only need to do it one more time for the championship. Sometimes Muir is prone to penalties under pressure and that could potentially be a factor, and this game seems destined to come down to the wire. For a team that’s known how good their chances are all season, it seems hard to imagine that they’d let up at the last minute, but Marina is good enough to pull it off. They probably couldn’t beat them in a series, but they only need to beat them in one game.