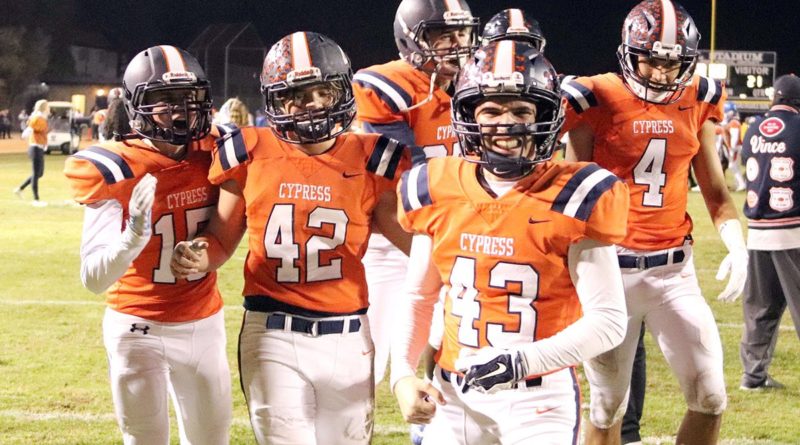 Cypress is undefeated through 13 games, and just knocked off Serrano, who was the top seed in the Division 7 playoffs and undefeated themselves going into the semifinals.

They had some good wins this season over Capistrano Valley and Tustin, and Ventura was a tough out in the quarterfinals as well, although Cypress certainly would’ve liked to put them away with more room to spare. Up until the Serrano game, they hadn’t beaten anyone good enough to contend for a Division 7 title, but 13-0 is 13-0.

Temecula Valley (11-2) has the clear edge in strength of schedule, and shocked the world in winning the Southwestern League. Who have they beaten this season? Vista Murrieta, who is head and shoulders above any other team that any other Division 7 squad has conquered this year. They’ve also beaten Chaparral, Murrieta Mesa, Elsinore, and Norte Vista. They came up two points short against Murrieta Valley, against whom that win would have landed them status as the clear favorite to win Division 7 going into the playoffs. And last week they edged out another championship contender in West Ranch.

Their one other loss was an ugly blowout against San Jacinto, who’s a dang good team, even though losing 41-3 to them is a surprising statistical outlier on their schedule. And that loss is well in the past anyway. Temecula Valley could say that they’ve proven more this season than Cypress, and in some ways, they’d be right.

The fact that they’ve been in more close games this year, usually on the winning side of it, may benefit them in this matchup. Ultimately, this sets up a perfect showdown for the title between evenly matched foes that should be ready to give it their all.

Cypress passes the ball and runs it about half-and-half. Pro-style QB Dylan Eldredge has been very consistent as a sophomore, and throws to standout WR Elijah Vaelua more often than not. Isaac Hurtado has been dominant at running back this year while also playing some WR/SB. Corey Anesi is another option at WR. Defensively, Hurtado forms a standout linebacking trio along with Ceasar Gallardo and Aidan Ashcraft. Hurtado is also a threat to take home kick and punt returns, and is a 3-star ATH recruit with offers from eight D-1 schools, including UCLA.

Temecula Valley has won some shootouts this year and some defensive duels. Their best player is two-way stud Brody Hughes, who might run away with Division 7 MVP. On offense he has 1,560 rushing yards and 25 rushing touchdowns at RB and another 262 receiving yards and two receiving touchdowns to boot. Hughes also has 85 tackles at free safety. For a player to put up numbers like that on both sides of the ball, through only 12 games nonetheless, is no ordinary feat. To top if off, he’s the team’s leading punt returner, and sometimes returns kickoffs too. No wonder he already has at least ten D-1 offers.

Offensively, the Golden Eagles run the ball more often than not, with Hughes getting the majority of the action but other RBs in the fold in Logan Moreno, Dylan Johns, and Blake Frazier. QB Zach Cutka has given Temecula Valley a strong presence in the air with 1,840 passing yards this season, and is an occasional threat to run. His receiving corps is led by Matthew Lindquist, Abe Flores, Hughes, and Anson Pulsipher.

While Temecula Valley’s defense isn’t as good as their offense, it’s not bad at all. A lot of the skill position guys are key contributors. Their front seven is pretty aggressive up front and does most of the hitting, but Hughes is a vacuum in the backfield. Their defensive line is led by DE Josh Hilton, NG Coleton Defalco, and DT/DE Darius Knight. They don’t lack in the linebacking department, with Pulsipher at OLB and MLB Brandon Wilson having over 100 tackles each. MLB Dylan Johns is also a major contributor. That front seven gets a good amount of sacks, and a ton of tackles for loss.

Cypress has gone under the radar most of the season for an unbeaten squad, but that’s certainly no longer the case. Temecula Valley has been scrapping all year when so many people counted them out. This game should come down to the wire.