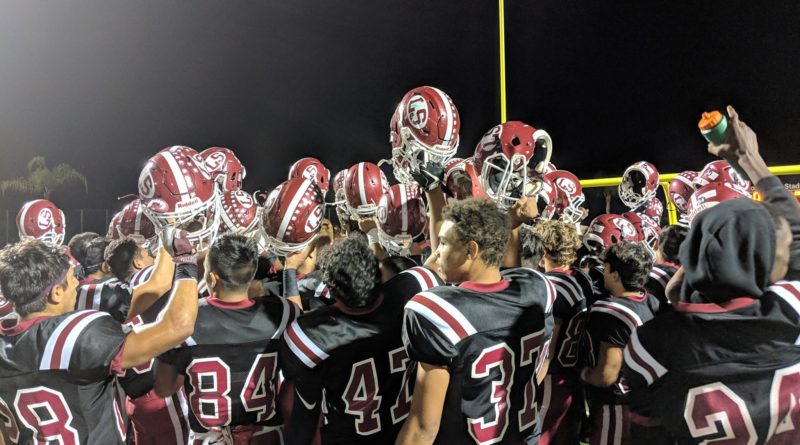 Division 6 lived up to the hype this year.

Going into the season, the field seemed to be both exceptionally deep with legitimate title contenders and impressively loaded at the top for a division outside the top five. That’s just how it went during the regular season, that’s just how it’s gone during the playoffs, and after everything, the arguable strongest teams going into the season have been the last ones standing. To top it off, most of the games have been close, too. There’s not much separating the last two teams in the field, either.

Pacifica (Oxnard) has the most D-1 talent in Division 6, with a great balance between all parts of the game. Because of their one nine-point loss to Division 4 contender Oxnard, they only landed the No. 4 seed – 9-1 was great, but three teams were 10-0, and the Tritons lacked victories over strong competition. Still, Pacifica is not the fourth dog in their field, as you can see–they’ve been in the conversation for the top spot, and they’re taking that right down to the final game. Plus, they’ve added victories of 25 points or more every week in the playoffs against Mira Costa, Citrus Valley, and Crespi.

The mix of both premier talent and major continuity Pacifica has, in the playmaking department as much as any, is just not something you see in Division 6. They have three offensive player of the year candidates in Division 6 with pro-style quarterback RJ Maria, running back Malik Sherrod, and running back/receiver Michael Johnson III. Even their second and third leading receivers, Kyrie Wilson and Savonne Farmer, have D-1 offers. And there’s yet another skill player on the squad with major production in RB Quentin Pooler, who has 718 rushing yards and nine rushing touchdowns as someone who isn’t even near the top of the scouting report. There’s more depth yet should any of those guys go down. Overall, Pacifica has 2,663 passing/receiving yards on the season and 3,593 rushing yards, good for a total of 6,256 yards of offense on the season. Look out.

And the star-studded cast doesn’t end on that side of the ball. Defensively, they might be just a dominant. LBs Caleb McCullough and Brad Bichard are up to 177 and 164 tackles on the season, respectively, and form a linebacking unit with 3-star Devin Aupiu that seems out of place in Division 6. Fa’amaini Aina is up to 123 tackles at SS. CB Nohl Williams is yet another Triton with a handful of D-1 offers. Pacifica would be a serious contender to win Division 4 and Division 5, and would arguably have the biggest collection of talent in either of those divisions.

Unfortunately for them, La Serna could contend in Divisions 4 and 5 as well, and that’s who’s waiting for them here in Division 6. No. 3 La Serna is still undefeated through 13 games on the year, and is pretty much in the same exact boat in terms of strength of schedule and point differential. They don’t have as many college prospects, but they get it done every night, and have a solid chance at completing the championship quest this weekend as well. Los Altos and San Jacinto the past two weeks were likely the best teams they’ve faced all year, and the Lancers made it out.

Like Pacifica, La Serna has a strong defense and a balanced offense. QB Andrew Henriquez has 2,336 passing yards on 70% completion this year, and 27 touchdowns to only three picks. He’s also a capable threat to burn a defense on the ground. RB Chandler McCaffer leads La Serna with 947 rushing yards and 18 rushing touchdowns, and Steve Pinales and Joey Bustos are both big contributors at RB as well. Jake George is the leading receiver with 825 receiving yards and eight touchdowns, and Atallah Shalash, Milo Lopez, and Jacob Leija are all close behind him.

Defensively, the Lancers are led by Bustos at MLB and Lopez at FS. Austin Burrows, Steven Garcia, and Jackson lead a defensive line that’s extremely aggressive–and effective–around the line of scrimmage, as is their whole front seven.

Other than Pacifica’s respectable loss to Oxnard, neither of these teams has faltered, although other than that game, neither has faced a team of their caliber. The numbers say that there is no way to separate the two sides. That just makes it all the more fun.