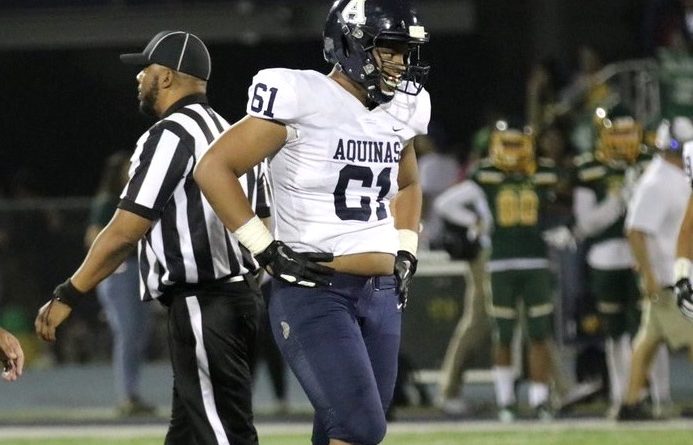 Neither St. Paul nor Aquinas came into the CIF Southern Section Division 5 football playoffs considered incapable of surviving the field, but if you picked both unseeded teams to meet in the finals, you should probably take a trip to Las Vegas.

These two underdogs have both won numerous gritty battles against all the favorites in Division 5 with almost zero margin for error, and it’s great to see one of them a game away from taking home a section championship. Both were easy to sleep on because despite strong records, they didn’t beat any elite competition before the playoffs.

St. Paul (12-1) got blown out by Narbonne in a game that Narbonne retroactively forfeited, and they lost by one touchdown to Sierra Canyon, which is actually impressive for a Division 5 squad. Other than that, they haven’t lost, but the best team they beat coming into the playoffs was … 4-7 Los Alamitos? Birmingham maybe?

Aquinas opened the season with a blowout loss to Grace Brethren and a shutout loss against Kaiser. They won out from there, but the best teams they played were at best decent playoff teams from lower divisions, and from there, some of the bottom-tier football teams in the Southern Section.

The point is, there just wasn’t any reason on paper to expect Aquinas to take down Oak Hills, Oxnard, and Glendora, and St. Paul to beat El Modena, Yorba Linda, and Culver City. But you know what? These have been rock solid teams all year, and that has not changed.

It would be very hard to pick either of these teams as the favorite given that they’re in the same exact terrain as far as their records and strengths of schedule go. Culver City was considered the best team in the field coming into the playoffs, so some might say that St. Paul has the edge for having silenced the Centaurs. But Oxnard and Glendora were legitimate title contenders – moderate favorites, even.

St. Paul might have a slight edge defensively. After shutting out El Modena, holding Yorba Linda to 16 points, and holding Culver City to 10 (!), the numbers say they have the best defense in Division 5, and it would be in the top five defenses in Division 4.

St. Paul showed they can stop the run by shutting down RB Keaton Haddad and a Yorba Linda squad with both speed and size on offense. They also proved they can stop an elite passing attack by putting the clamps on Culver City. Holding Los Alamitos to seven is impressive too, and for a Division 5 squad, even “holding” Sierra Canyon to 28 points isn’t bad. With Birmingham really turning it on down the stretch, their preseason shutout victory over them looks very impressive now.

Just how neck-and-neck are these teams on paper? St. Paul has given up 141 points in 13 games, and in the same amount of games, Aquinas has given up 142. Holding Glendora and Oxnard to 21 apiece is very reasonable. Their defense is easily strong enough to compete with St. Paul. Oh, and they’ve both scored exactly 414 points this season.

It’s not a secret that St. Paul slows down the pace and grinds you out on the ground. Trenell Ridgley leads the Swordsmen with 1,276 rushing yards and 13 rushing touchdowns. Tyler Adams is right behind him with 885 and 10 TDs. Dual-threat QB Gene Valdez is a capable passer, but an even better runner at the quarterback position. Angel Garcia and Justin Jackson are the leading receivers when St. Paul does pass, which they only do just enough to keep defenses honest. St. Paul’s size on the offensive line is a nightmare for middle-division teams, led by C Calaijah Fido and OT Marion Miller, who are 5-foot-11, 337 pounds, and 6-foot-5, 310 pounds, respectively.

Well-utilized size is a theme on defense for the Swordsmen too, with DL Nehemiah Tualaulelei-Malele, Elijah Gallegos, Elijah Hatfield, and LBs Jonathan Fuamatu and Rolando Espinoza leading the front seven. Garcia is a standout in the secondary as is Daniel Pallan, who also sees action at receiver.

Aquinas has some pretty similar strengths across the board, and they’re very balanced with their passing and running games. They have a strong running back tandem in Terayon Sweet and Isaac Handy, and a pro-style quarterback in Marco Perez. Rodarial Abercrombie and BYU-commit Terence Fall are the top receiving options.

The Falcons have perhaps the biggest defensive threat on either team in DE Sione Lolohea, who recently visited Boise State and Oregon State, two of at least eight D-1 schools that have offered. SS Brent Austin and CB Anthony Cooper are standouts in the backfield.

Both of these teams have come into the last couple of games as significant underdogs — especially Aquinas — so it’ll be interesting to see if they keep chips on their shoulders in different situations. It might be a low-scoring defensive battle, but this championship game should be epic.