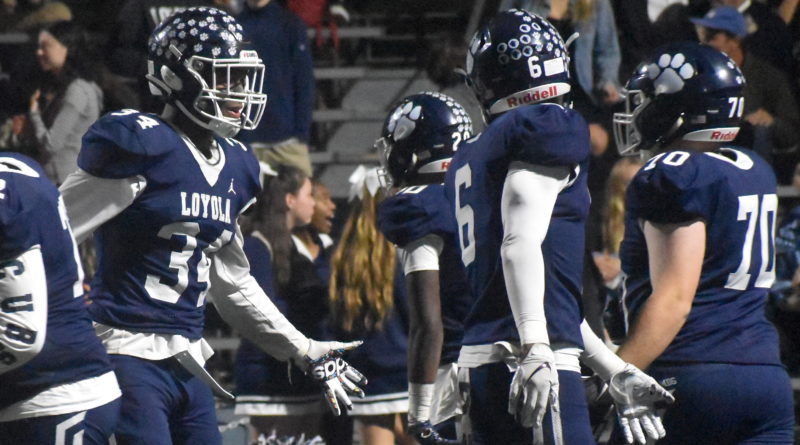 The San Juan Stallions (10-3) got here by playing the kind of season you’d expect from a Division 4 contender. They had some well-fought preseason losses against playoff teams in higher divisions – Orange Lutheran, Edison, and Tesoro – and a dominant league run against opponents that had no chance.

Loyola (6-6) is coming off a 31-14 win over No. 2 Camarillo, who many pegged as the best team in Division 4 coming into the playoffs. Loyola played by far the hardest regular season schedule of any of the top contenders in the division, and it seems to be paying dividends. That’s the Mission League for you. Even the teams around the bottom of the league are still excellent.

Loyola has improved a ton from the start of the season. They still only finished the regular season 3-6, and would not have been favored against Alemany had their league matchup not been canceled due to the Saddleridge fire. Their preseason included a blowout loss against St. Augustine, a decisive loss to Vista Murrieta, and a loss to Cathedral. The Cubs’ only league win was against Serra (Gardena), but that was a very impressive victory. Being able to at least hang with Notre Dame (Sherman Oaks) and Chaminade was also an indicator that the Cubs didn’t lack fire and confidence.

And look at them go now. They started the playoffs with a shutout win against Palos Verdes, and have now beaten both Villa Park and Camarillo by 17 each. If they bring a similar effort to last week, they’ll have an excellent chance at completing the title run.

The Cubs run the ball a lot behind sophomore RBs Harrison Allen and Tahj Owens. QB Brayden Zermeno has come on particularly strong in the playoffs and gives them more than enough presence in the air with a fairly deep receiving corps that includes Jacoby Kelly, Brendan Pernecky, and  Peter Vanis. Zermeno is also a legitimate running threat. Their offensive line is also a strength.

Loyola’s offense has been excellent over the past two months, but it’s their defense that holds them down with the most consistency. Juniors Ceyair Wright and Zakhari Spears both have offers from big time schools and form one of the best cornerback tandems in SoCal. In the past two games alone, Wright has had a 95-yard kick return touchdown, a 40-yard punt return, two interceptions, and a forced fumble. Blake Neithart and Evan Thomas round out their strong secondary. The Cubs’ defense is athletic and energetic across the board, with standout linebackers in MLBs Steven Arellano and Nikko Gonzalez and OLBs Carter Link and Dominick Belisle.

San Juan Hills has a good deal in common with Loyola on the field. Very few teams can match the energy of either squad, and that’s been part of the identity of each all season. Neither team is outright huge, but both have enough size to get by with a lot of great athletes, and they play physical and aggressive football. Grit is a key concept for both.

Defensively, the Stallions are strong across the board and generally play a rugged brand of football. DE Tyler Wegis, a future Utah Ute, is the biggest key to their attack on that end. He has 36 of their 111 TFLs this season, which are both very impressive stats. Versatile LB Jake Hall entered the 100-tackles club last week against Paramount, and Jonah Johnson also does a lot of the hitting at both MLB and OLB. Hall, Johnson, and Bryce Crider all do a good amount of edge-rushing at linebacker.

Elliot Degroote is a great defensive tackle as well. The fact that the Stallions’ front seven can both blitz forcefully and mobilize to the backfield gives their defense a versatile edge that most don’t have. James Gaines, Joey Hobert, Billy Hester, and Chase Schmidt comprise a very physical defensive backfield.

Offense is where San Juan Hills and Loyola differ a lot. Loyola runs the ball more than half the time through a number of guys, and is fairly egalitarian in regards to their receivers. San Juan Hills passes a little bit more often, with a consistent pro-style quarterback in Hudson Jones who they’ve played through all year. And he puts up numbers that reflect that, with 2,411 passing yards on 72.3% completion and 32 touchdowns to only four interceptions. That’s good for a huge passer rating of 134.2. He’s not a strong runner, unlike Zermeno.

San Juan Hills has a strong run-game, but it all goes through just one guy — RB Austin Hogan. He’s been a workhorse with 1,372 rushing yards and 18 rushing touchdowns this season. Also unlike Loyola, they have one top receiver in Washington State-commit Hobert (who plays both ends full time) that Jones goes to all the time. Hobert has 1,176 receiving yards and 18 touchdowns this season. Gaines is their second leading receiver, and there are a few other guys that get targeted once or twice a game.

This teams are very similar and should put on a great show Friday night. Expect fireworks.