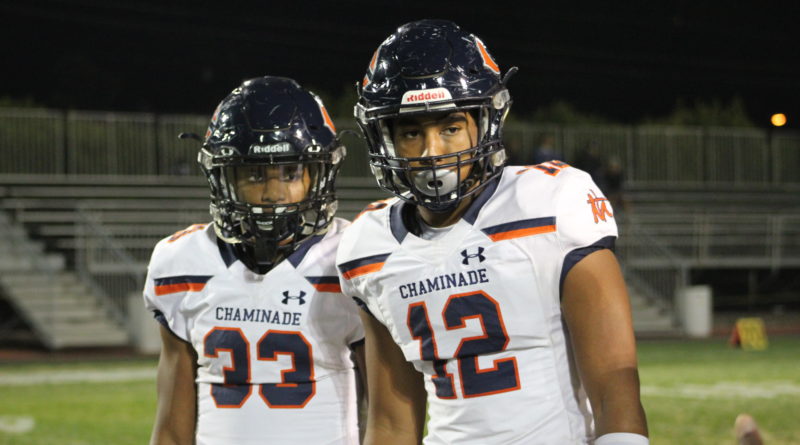 When you look at the records between Chaminade (8-5) and Sierra Canyon (12-1), the Trailblazers look like the heavy favorite.

But you can throw the records out. Well, throw out Chaminade’s, anyway.

Chaminade is one of the hottest teams in Southern Section football, and is in the midst of completing one of the biggest turnarounds in recent Southern Section history. They went 2-3 in the preseason and appeared to be arguably the weakest team in the Mission League.

Then they came out with a boom against an excellent Notre Dame (Sherman Oaks) squad to the tune of 35-14, and haven’t looked back since. They lost well-fought games in the following weeks to eventual league champion Bishop Amat and Division 3 semifinalist Alemany. And they’ve now won four in a row against Loyola, Serra (Gardena), Norco, and Upland.

It’s a shame that we were deprived of a Chaminade vs. San Clemente semifinal. But it would’ve been hard not to like Chaminade’s chances. Momentum is a key word with the Eagles.

The Eagles are led offensively by dual-threat QB Jaylen Henderson and RB Willy Camacho. In 12 games, Henderson has 2,496 passing yards on 62.6% completion, and another 669 yards on the ground, good for 3,165 total. His performance this season on a rebuilding team playing this well down the stretch is deserving of some all-division awards consideration.

Camacho also shoulders an enormous playmaking load with over 1,000 rushing yards and 17 rushing yards this season in only 11 games, in addition to being the team’s second-leading receiver. Ian Duarte also has over 700 receiving yards as a freshman, and the offensive line is another strength for Chaminade.

Defensively, safeties Isaac Gallegos and Tommy Sykes do a lot of the hitting, and make an excellent secondary with DBs Jeremy Zuniga and Daluan Bright. Chaminade’s front seven doesn’t live on bringing a ton of pressure at the line of scrimmage, but they are athletic and they execute. LBs Bryce Mack and Nick Stone are among the biggest contributors.

Sierra Canyon is the top seed for a reason. While they haven’t played a Division 1 team this season, the Trailblazers are every bit as formidable as 12-1 looks, with wins over Lawndale, St. Paul, Grace Brethren, Paraclete, Vista Murrieta, and Rancho Cucamonga. Their only loss came narrowly in their third game to Oaks Christian, who played one of their better games of the year.

While they’ve been pretty much the same dominant team all season, they too have a ton of momentum with 10 straight victories. The recent wins against Grace Brethren, Vista Murrieta, and Rancho Cucamonga are the most impressive. They’ve earned the title as the favorite throughout this whole tournament. But they’ll have to play their best game of the season to beat Chaminade.

Sierra Canyon is a defensive team with a great offense. They play at a fairly slow pace, and methodically torture teams with an athletic defense that almost never falters – once they get a lead on you, there’s almost no chance you’ll get it back.

The Trailblazers are also led offensively by a junior quarterback — pro-style QB Chayden Peery. He’s up to 2,707 passing yards this season, with 16 touchdowns to only one interception. DJ Harvey has been outstanding this season at wide receiver with 1,218 receiving yards. JD Sumlin excels at both running back and receiver, leading the team with 752 rushing yards and 12 rushing touchdowns with 470 receiving yards as well. WR Donovan Williams and RBs Jason Jones and Brendon Gamble are also big contributors in a very balanced offense.

Defensively, Harvey has been rated both a 3-star and 4-star cornerback, with offers including LSU and Oregon. Star linebackers JD Hernandez and Drue Watts both have over 100 tackles on the season. FS Kamari Ramsey and LB Cole Bullock are two of several standouts on that end.

With both teams red-hot and rolling, this should be one of the best games of the season.