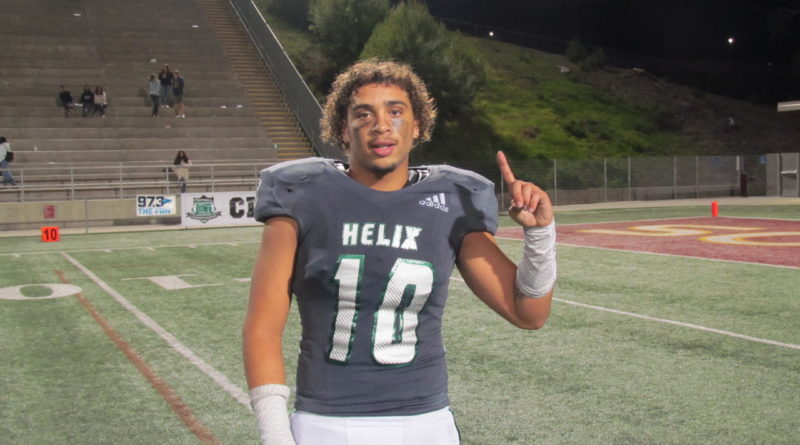 CHULA VISTA — Helix’s defense rose to the occasion in the second half, returning two interceptions for touchdowns to lead the Highlanders to a 28-21 win over Carlsbad in the CIF San Diego Section Open Division football championship at Southwestern College.

Helix running back Christian Washington carried 20 times for 179 yards and a touchdown in the win. The sophomore has now run for over 100 yards in each game since stepping in for the injured Elelyon Noa.

The Helix defense made Carlsbad’s Aidan Sayin uncomfortable in the pocket all night. The Highlanders forced Sayin into two interceptions within a two-minute span in the third quarter, returning both of them for touchdowns.

Carlsbad’s Cole Wright has been one of the county’s top receivers this season and got the scoring started on Friday night. On the first snap of the second half, he caught a crossing pattern and weaved through the defense before diving into the end zone for an 80-yard touchdown reception.

“We were all nervous because this is CIF, but in the end, we got it together and became a team,” Helix senior linebacker John Carroll admitted after the game.

His third quarter interception was returned for a touchdown during a streak that saw Helix score 28 unanswered points.

After Carlsbad took an early third quarter, Helix stepped up their level of play over the next twelve minutes and scored 28 unanswered points.

Carlsbad made a quarterback switch to Jack Gerrargty midway through the fourth quarter, who led them on two straight scoring drives  with a Cole Wright onside kick recovery tucked in between those.

Carlsbad threw the first punch of the second half, going for 80 yards on the first play of the half, but that didn’t stop Helix.

“Well coach was just telling us that we were playing good defense,” Carroll said. “He was breaking it down saying we had mental mistakes.”

Helix immediately responded to Carlsbad’s touchdown with one of their own. Following that, the Highlanders got their defense locked in which led to back-to-back pix-sixes from Keionte Scott and John Carroll.

“We knew it was gonna be a defensive battle and we were gonna go blow for blow, we just made an adjustment and kept it rolling,” Senior Keionte Scott said.

“We talked at halftime that we needed to get back to our personality, run a little bit more power football,” he said.

Senior athlete Keionte Scott has done a little of everything for the Highlanders this season. He’s caught ten touchdown passes, rushed for two touchdowns, returned a kickoff for a touchdown and grabbed his fourth interception of the season in Friday’s game.

“Nobody knows about him because he showed up on our doorstep the day two-a-days started,” Helix heac coach Robby Owens said. “He’s such a tremendous kid and tremendous athlete.

The Highlanders will be off next week as they await their opponent in the CIF State Playoffs.