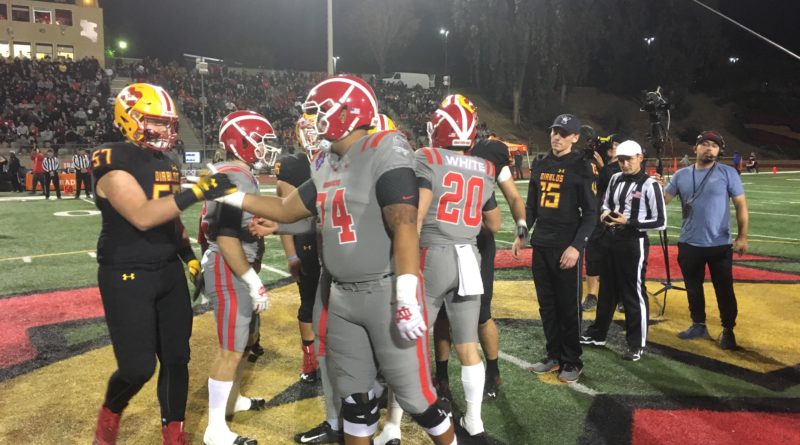 MISSION VIEJO – The Mission Viejo Diablos were 11-0 with wins against San Clemente, La Habra, Upland, and Servite coming into the CIF Southern Section Division I semifinals against Mater Dei. They beat Servite, a consensus top 30-40 team in the country, by three points last week, and every other game this season had been a blowout victory.

Yet they were monumental underdogs hosting Mater Dei on Friday. And Mater Dei, who’s now 12-0 this season, showed exactly why that was the case when they abruptly ended Mission Viejo’s dominant season in a game that was substantially more lopsided than the score shows.

Going up against one of the better defenses and one of the very best defensive lines in the country, Bryce Young was unreal as usual. He finished with seven passing touchdowns and 520 passing yards through three quarters. Young would’ve easily set a new career-high in touchdowns, and maybe yardage too, had Mater Dei not entered garbage time with a 49-10 lead before the third quarter ended. Per usual, Kody Epps also put up equally ridiculous numbers for a wide receiver with 339 receiving yards and five receiving touchdowns on ten receptions. Kyron Ware-Hudson also had a strong night at receiver including two touchdowns.

Mater Dei has the best offensive line in the country, and that was in full display against Mission Viejo’s world-class defensive line. Lance Keneley, Logan Schwenke, and Keanu Tanuvasa and co. were coming for Young at full speed all night, but Myles Murao, Tai Marks, and the rest of the platoon were able to buy him large amounts of time and space. David Meyer sacked Young quite emphatically at one point in the second quarter, and numerous media members on the sideline remarked that they weren’t sure they’d ever seen him get sacked before, at least not for a loss of ten yards. That speaks volumes, and was the only time he got sacked on the night.

The Monarchs’ defense was also utterly dominant against an offense that has bulldozed several elite defenses this season. Until they pulled the plug on the starters around the beginning of the fourth quarter, they had only allowed three points on the night, a 46-yard field goal by RJ Lopez–the other seven came off a punt block returned for a touchdown by Ryan Nichols.

It’s hard to say anything went right for Mission Viejo, who wasn’t awful by any stretch but just was severely outmatched. Their offensive line fought like heck against Mater Dei’s elite front seven, but QB Peter Costelli and RBs Jacquez Robertson and Tyson Scott had absolutely no room to work with. Costelli’s receivers were blanketed by Mater Dei’s dominant secondary almost every single snap. They forced a few four-and-outs on the defensive side, but they just never seemed to have a chance.

It’s hard to pick out individuals from Mater Dei’s impeccable defensive effort. LBs Dean Neeley and Nate White were excellent and finished with a lot of tackles. Josh Hudson and Domani Jackson were both among the standouts at DB, and Jackson recovered a fumble. Their defensive line rushed Costelli well as a unit all night. All 11 guys on the field in the first unit were just about perfect.

For the Diablos, OLB David Meyer had the huge takedown of Young and blocked the punt Nichols took home. In garbage time, Costelli found WR Chase Nenad for a touchdown and James McDonald had a pick-six. RJ Lopez had a 46-yard field goal and was three for three on PATS.

Mater Dei has knocked Mission Viejo out of the playoffs for three years in a row. The Diablos and their crowd were quieter all game than at any other game this season. There was a strange tameness about the blowout in that Mission Viejo knew that they were going to give it their all, gave it their all and really did not play poorly, and still were crushed.

Whereas other teams of Mission Viejo’s prowess are normally seen freaking out, collapsing, and pointing fingers in a playoff loss like this, the Diablos were extremely calm because they knew there wasn’t an enormous amount more they could’ve done against a team that was even bigger and faster on both ends. Again, calm doesn’t mean they lacked energy on the field, but there was a somber vibe throughout the stadium that was pretty clear. That’s what it looks like when one of the better teams in the country knows exactly what’s in store from thebest team in the country.

Young and Epps got Mater Dei on the board two minutes into the game, and made it look frighteningly effortless. Then Mission Viejo didn’t score on their first drive. That was all that was needed for an unbiased observer to see clearly how this game was going to go. Mission Viejo did an excellent job tightening up defensively in the second quarter and much of the third, but they had no answers for Mater Dei on either end.

“I don’t think it really affected our mentality, because we always take it one week at a time,” Neeley told Scorebook Live after the game in reference to their streak of meeting (and beating) Mission Viejo in the playoffs.

“My memories at Mater Dei have been nothing short of amazing. Sometimes me and all the seniors step back and we look at us, we’re like, ‘How are we the number one team in the nation?’ We look at each other in the locker room, and we’re a bunch of goofballs. We just love the game, and we love to come out and hit. So honestly, I’ve loved every second of time at Mater Dei, and I’m going to miss it more than anything.”

While this was a disappointing ending to a phenomenal season on a team filled with seniors who will play college ball, Mission Viejo has a good chance at being just as good next year, and maybe even better. Among the list of standout Diablos returning next year are Costelli, Robertson, Scott, WR Mavin Anderson, LB Easton Mascarenas, and CB Ryder Fitch, and that’s just the start.

Robertson said after the game that they believe in their chances to improve this offseason and come back even stronger next season. So many excellent Mission Viejo players will be gone, with the biggest collective void likely to be on the defensive line with the likes of Schwenke, Keneley, and Tanuvasa graduating. But their offense will likely be even better next season, despite studs like WR Chase Nenad and OG Tommy Mirabella on the way out. If some huge shoes can be filled, Mission Viejo has to like their chances to not let up one bit.