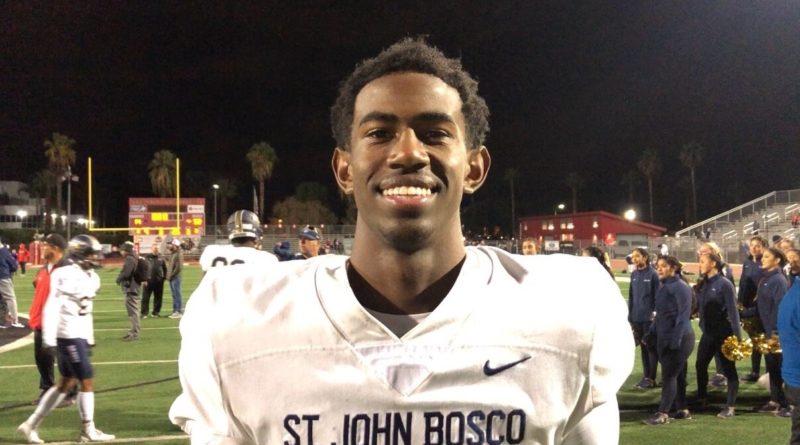 CORONA — St. John Bosco took a 14-0 lead and never looked back Friday night in a 52-14 Division 1 CIF Southern Section semifinal road win over Corona Centennial. St. John Bosco will play rival Mater Dei in the championship on Saturday, the one team that the Braves have lost to on the year.

Below are five takeaway from tonight’s St. John Bosco victory.

St. John Bosco quarterback DJ Uiagalelei was his usual self throwing for four touchdowns. It was his strength that was most impressive however. Multiple times, the Clemson commit evaded sacks simply by not going down. His ability to keep plays alive because he’s so tough to tackle is incredible.

On the Centennial side, quarterback Carter Freedland threw for a TD and ran for another score. He was the top signal-caller for Centennial coach Matt Logan, who rotates three QBs. Gary Bryant caught the touchdown at the end of the first quarter. Freedland threw a beautiful fade pass, which Bryant dove for and snagged. On the defensive side, Korey Foreman has two sacks for the Huskies.

“We didn’t give up any big plays,” St. John Bosco head coach Jason Negro said after the win. “We forced them to have to go down the field and when you have to play 13 or 14 plays in a row you’re going to make mistakes and we’ll maybe be able to make a play somewhere.”

That was the key in the game. The Bosco defense made life extremely difficult for the Huskies Friday. St. John Bosco forced multiple turnovers on downs, fumbles and had two interceptions.

Centennial did a nice job of hanging around in the first half of the game. It was 14-7 and 28-14 early, but in the second half the Braves’ immense talent took over. St. John Bosco scored all 21 points of the second half to put the game way out of reach. There are two clear top teams in the Southern Section and they’ll meet for a championship on Saturday.

St. John Bosco hosted Mater Dei in the regular season and lost 38-24. Monarch quarterback Bryce Young completed 19 of 33 passes for 256 yards and three touchdowns in that game. He also rushed for two scores.
No one has been able to stop Young all year. He killed Bosco in their first meeting. How the Braves defend him in the rematch will decide the game. What adjustments will they make?

This is the fourth year in a row St. John Bosco will play Mater Dei in the Division 1 Southern Section Championship. For the last two years, this matchup has been predictable. We’ll see what happens next week …