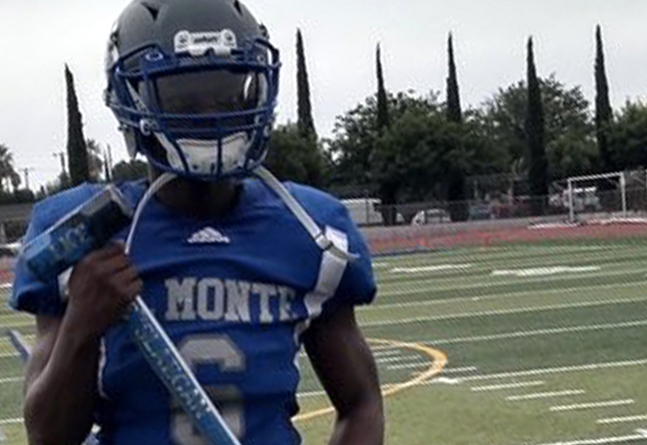 No. 1 El Monte vs. Jurupa Hills

12-0 El Monte is only two weeks away from completing the dream season, and will continue to be the favorite in every game they play. That includes this week against Jurupa Hills, who is formidable at 11-1 and capable of knocking the Lions off, but it would take a lot. Knocking off undefeated No. 4 Rio Hondo Prep 36-29 was a great step though.

Comically, Booth is the only player to catch a pass this season for El Monte outside of one (touchdown) reception for Cueva. When you factor in Booth’s 605 receiving yards and ten receiving touchdowns, he has 2,839 total yards and 37 total touchdowns this season. The few times QB Joseph Herrera does throw, it’s to Booth, and everyone knows it, but he still has 11 touchdown passes to only one interception this season. In short, you know what El Monte is going to do, and you know who’s going to do it, but nobody has come remotely close to stopping it.

You probably won’t be surprised to hear that Booth leads El Monte in tackles as well, as a LB/DB hybrid. Albert Nuno and Vince Herrera also lead a strong defense at linebacker. The Lions have been a force defensively all season.

That means Jurupa Hills has a tangible advantage in their passing game and the number of different playmaking threats they have. Eric Marinez has 1,970 passing yards this season at QB, and is also a major running threat with 332 rushing yards and seven rushing touchdowns. His biggest targets are Davieon Gambo and Trayton Cooper, both of whom have about 700 receiving yards this season. Cooper also leads the Spartans with 517 rushing yards and 15 rushing touchdowns this season, with Kamron Randell-Taylor, William English, and Sean McKenzie all also in the fold at RB. Gambo runs the ball sometimes as well.

Jurupa Hills has been steady and balanced on defense as well this year, with numerous skill players contributing on that end too. English, Leonardo Suarez, and Dennis De Santiago hold it down at linebacker, with De Santiago playing some SS as well. Cooper (CB), Gambo (CB), and Matthew Newcomb (S) round out the secondary.

So far, El Monte hasn’t faltered, but given that Jurupa Hills has only lost once, they shouldn’t look at themselves as being that heavy underdogs. Still, El Monte will be the favorites, and know that the championship is coming closer within their reach. The odds of them letting up now, even against one of their strongest foes all year in Jurupa Hills, is unlikely.

Neither Adelanto (10-2) nor Orange Vista (9-3) were heavily favored last week, let alone expected to win in blowouts. In fact, Orange Vista was considered an underdog against Oak Park, whom they eliminated 23-0. They’ll be underdogs again this week against a formidable Adelanto squad who has been a frontrunner for the Division 12 title all year. But it’s unlikely that anyone would call the gap significant.

Orange Vista’s three losses this season came against Burbank, El Monte and J.W. North, all legitimate competition. Shutting out Oak Park last week was rather easily their most impressive victory this year, and should give them hope this week.

Offensively, Orange Vista prefers to run the ball with Elijah Banks leading the way. He has 894 rushing yards on the season, and Chris Banks and Ruben Acuna are both secondary options with six rushing touchdowns each. Elijah Robertson has had a solid sophomore year at QB and gives the Coyotes enough of a passing presence to keep defenses honest. Michael Yen and Isiah Jones are his top options at receiver, with Randy Wilkins also in the mix.

Adelanto was considered a slight favorite last week against Moreno Valley, but blowing them out 36-3 was not expected. They’ve been that good this season though, and for a team that’s had championship aspirations all year, it’s not that much of a surprise. If not for two losses in their ambitious preseason, they would have definitely earned a seed.

QB Angel Ochoa has 2,470 passing yards on the season and 27 touchdowns in the air. But with Washington State commit Marshawn Buchanan running the ball, you have to pick your poison with the Saints. Buchanan has 724 rushing yards and 14 rushing touchdowns in only nine games this season. Branden Jones and Hosia Stokes are also options to run the ball. Ochoa has a wide array of strong receiving threats to work with, with Omari McCullough at the top, Rashaun Ramsey and Joshua Lorick next, and Jakim Allah as well, among others.

Transfers Lorick and Allah were October additions, making Adelanto perhaps a bit more dangerous than they already look like on paper. Lorick transferred in from Mater Dei and has multiple D-1 offers. Adelanto’s two losses, to Las Vegas and Apple Valley, both came before those two started playing this year.

The two squads seem to have equally strong defenses, and both have been great this year. Orange Vista has two D-1 defensive ends in Dion Wilson Jr. and Ethan Saunders, who are committed to Arizona and Cal, respectively. Saunders has 34 tackles for loss this season and eight sacks. Joseph Hinson leads the team with 78 tackles at MLB, and has 19.5 TFL as well. OLB Keshaun Mackey had ten scholarship offers before committing to Azusa Pacific. If Adelanto doesn’t have a plan to deal with the Coyotes’ fearsome front seven, they will be toast, although the odds are pretty good they’ve read the scouting report.

On that note, Adelanto has one of the best front sevens in the division as well. They don’t get a ton of sacks, but they dominate around the line of scrimmage, and have 85 tackles for loss as a team on the season. MLB Rickylee Medina leads the Saints with 97 tackles, DE Darius Gibson has 95, OLB Joequan Banks has 89, and MLB Josef Tena has 78. Stokes is a standout in the secondary, in addition to Branden Jones and Lawrence Oliver. Adelanto really has almost no weaknesses to speak of.

With Adelanto looking so strong at 10-2 and coming off a beatdown against Moreno Valley, they have to be considered the clear favorite to win this game, and would have a great chance at potentially shutting down El Monte in the finals were those teams to meet there. But Orange Vista has a very realistic chance of knocking the Saints out and avenging their 35-6 loss to El Monte earlier in the season. And hey, Jurupa Hills could stun El Monte and win the whole thing. Everyone will control their own fate this Friday.