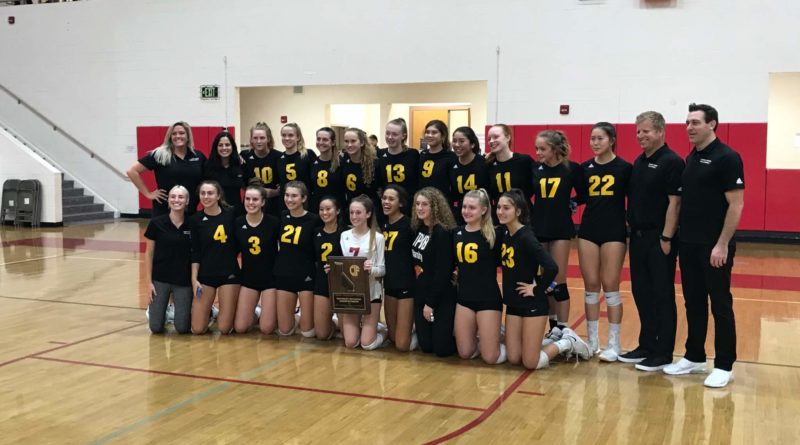 After Torrey Pines grabbed the first set, 25-17, Mater Dei battled back and held a 15-12 lead in the 2nd set when a problem was discovered. With rain sweeping across the county, a leak developed in the roof of the Torrey Pines gym and created a wet spot that suspended the match.

Coaches and administrators from both schools got together to discuss possible options as both teams as well as the Torrey Pines student section began dancing to the loud music being piped in.

After about thirty minutes of deliberations, it was decided that the two teams would head one mile east on Del Mar Heights Road to continue the game at Canyon Crest Academy.

“That was the craziest thing I’ve ever experienced,” senior outside hitter Delaynie Maple said. “The nice thing is we’ve played in this gym before. We play (Canyon Crest) a lot in season, it’s nice knowing the familiarity of the gym.”

After a 90-minute delay the match resumed with Torrey Pines surging back to take the 2nd set, 25-23.

Mater Dei refused to let their season go down without a fight. Trailing 19-16 in the 3rd set Mater Dei called a timeout. The Monarchs came out of the timeout and proceeded to win nine of the next thirteen points to secure their first set of the match, 25-23.

The two teams traded points for much of the fourth set. Trailing 17-16, Torrey Pines went on a 10-3 run to take set 4, 25-20, and secure their first ever trip to the CIF State Championship.

“We knew that it wasn’t gonna be easy, I would’ve been super surprised if we swept them tonight,” Maple said. “They’re an amazing team, credit to them they have amazing players on that team.”

The Falcons, who moved to 39-2 with the win, will take on Marin Catholic on Saturday night at Santiago Canyon College.

“We have the most amazing student section who came and supported us our whole game so that definitely helped,” Maple said.

In the division one regional final, La Costa Canyon fell to Vista Murrieta in five sets.