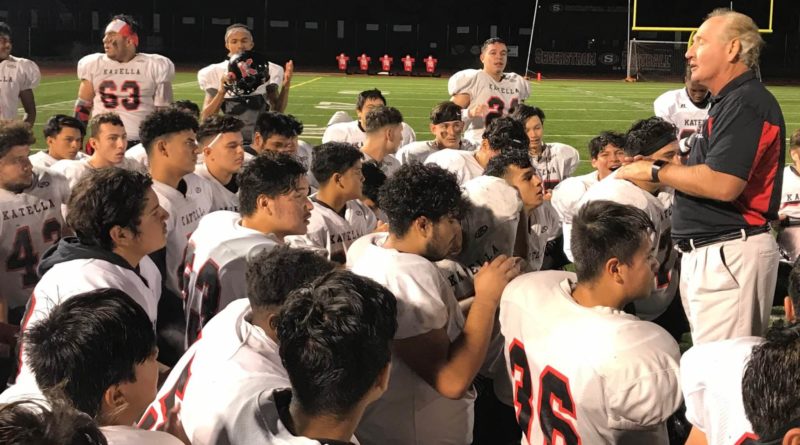 No. 1 Crescenta Valley vs. Katella

It’s been a little strange this season to see undefeated Crescenta Valley in Division 10, when they would be the clear favorites to win Divisions 9 and 8, and would have a fighting chance in Divisions 7 and 6. They haven’t had the hardest schedule, but defeated Muir to win the Pacific League. They’re easily the favorites in this game and in the field, but are far from penciled in to win anything from here on out.

The Falcons will see a very worthy foe this week in Katella, who is 11-1 in their own right this season with their only loss coming narrowly against a strong Marina squad in the preseason. The Knights, like the Falcons, are only giving up just over 10 points per game this year. They should be in peak form having defeated solid teams in Summit and No. 4 Segerstrom the past two weeks after utterly dominating their league. Katella is unquestionably an underdog against Crescenta Valley, but nobody can write them off.

Like so many lower division semifinalists, Crescenta Valley and Katella both have strong enough passing games to keep defenses honest, but run the ball more than half the time. Crescenta Valley has two strong quarterbacks in Chase Center (not to be confused with the Golden State Warriors’ new stadium) and Brendon Pehar. Both had played in every game this season until a few weeks ago, but Center hasn’t played since October. If he’s out for the playoffs, that’s a big loss for Crescenta Valley, but Pehar has seen action as a legitimate QB2 in every game this season has been outstanding as a full-time quarterback the past few games.

Additionally, Crescenta Valley has an elite offensive line for a low-division team, and a number of additional playmakers. RB Maximus Grant has 900 rushing yards and ten rushing touchdowns this season, and is one out of six players who see action at receiver every game. Center is also a major dual-threat at QB with nearly 55 rushing yards per game. In addition to Grant, James Cho and Sebastian Deleon are big factors at RB. Cho is the team’s second-leading rusher, and Deleon, who leads the team with 11 touchdowns, serves as a specialist for short blasts in addition to a receiving threat. Colby Rees and Angel Ochoa are the biggest targets at WR.

Katella has a lot of similarities offensively. Dual-threat QB Pharrell Scorza is a very accurate passer and also the team’s second-leading rusher. Miles Poland and Luke Monzon are RB1 and RB2, with Jaielen Berry coming on strong as another top threat down the stretch. A lot of guys have seen action at receiver for the Knights this season, including Monzon, with Raymond Mendoza at the top and Donnovan Arrington and Marcus Viramonte also in the mix.

Everything is a strength defensively for Crescenta Valley. Deleon has by far the most tackles on the team with 140 at LB, and also leads the Falcons with 17 tackles for loss. LB Matthew Watson is another big threat around the line of scrimmage and rushing the edge, with DL Logan Tourville as another big factor in the front seven. They have a standout defensive backfield as well, led by PJ Weinmann, Colby Rees, Ochoa, and Aaron Garcia. The secondary is a strength for Katella as well, led by Daniel Sifuentes, Aaron Rogers, AJ Alegre. Of their seven forced turnovers last week against Katella, five were interceptions from their DBs. LB Nate Lopez is one of many standouts in an impressive front seven for the Knights.

Crescenta Valley is the top seed and big favorite for a reason. But Katella, led by a lot of upperclassmen, mostly seniors, is right behind them. The gap isn’t as big as people might think, and Katella should believe in their chances to end Crescenta Valley’s dream season.

As is the case with the prior game, this matchup features one major division favorite in Orange (11-1) against an underdog squad capable of knocking them off in Simi Valley (9-3). If not for an overtime loss to Division 5 quarterfinalist Yorba Linda, the Panthers would be undefeated on the season. Many see them as the best team in the division closely behind Crescenta Valley, but with the Falcons unbeaten and numerous other Division 10 teams finishing the regular season 9-1, Orange missed out on a playoff seed. At this point it doesn’t really mean anything as long as they’re given the credit they deserve as the favorite to win the bottom bracket and make the finals, where they would have a great chance against Crescenta Valley or Katella.

Simi Valley is probably the farthest team from a favorite left in the division, but they’re a legitimate contender for the title. They’ll be an underdog in whoever they face as the result of a 7-3 regular season, but coming off a decisive victory over No. 2 Norte Vista, they’re formidable. Plus, after opening the season with losses against Lompoc and Redondo Union, they’ve only lost once game since.

Still, Orange has been even more formidable all year long. They would’ve been at least the second seed had they completed an unbelievable fourth quarter comeback effort against Yorba Linda in their second game, and scored five points for every point they gave up this season. Last week, they “only” beat J.W. North 27-7, which was their smallest margin of victory on the season. The Panthers aren’t huge, but they’re big enough to hang with anybody in this field, and play with a lot of toughness across the board.

Dual-threat QB Daylen Pedroza, RB/WR Isacc Galvan, and WR/RB Andrew Andrade lead an Orange offense that has put up over 600 points already this season. Coming into last week against J.W. North, Pedroza, son of head coach Robert Pedroza, had 2,095 passing yards this season on a massively efficient 144.9 passer rating, with 816 rushing yards and 16 rushing touchdowns to boot. Galvan had 1,717 rushing yards, 23 rushing touchdowns, and 507 passing yards through the first 11 games this season as well. Andrade had 794 receiving yards to lead the team in addition to 344 rushing yards, and ten total touchdowns. Isac Adetoye is another scoring threat both rushing and receiving, and Jeremiah Rivera is yet another threat to run the ball. Overall, Orange gets over 60% of their offensive yardage from rushing the ball, even though their passing game is among the best in all the lower divisions.

The playmaking for Simi Valley has broken down quite similarly this season. Travis Throckmorton is a pro-style quarterback who has a bit of a smaller workload than Pedroza, but he anchors a strong passing game for a team with an even better running game. Elijah Leiva is the big force behind their ground attack, with just over half of the Pioneers’ rushing yardage and touchdowns with 1,406 and 18. Ranell White is a great second option at RB as well. Throckmorton completes 66.5% of his passes and has 1,846 passing yards on the season, and Malik Hunt is by far the biggest threat at receiver with Jonah Burton among a few other solid receiving threats.

Orange has an edge defensively coming into this game. While it’s largely the product of a very easy schedule, they’ve allowed less than 90 points on the season when you take out the Yorba Linda game, and holding J.W. North to seven points should serve as a statement. The Panthers’ biggest strength defensively is their secondary, led by Andrade at safety, who holds two scholarship offers primarily for his work on the defensive side of the ball. Stopping the run was an issue for Orange against a larger Yorba Linda squad, but their linebacking group has been outstanding this year. Dylan Moses, Jeremiah Rivera, Nathan Cook, Christopher Quiroga, and Jaydon Bonnafoux form an outstanding linebacker rotation with the grit to handle bigger offensive lines and the quickness to keep up with anyone they’ll have to deal with. Simi Valley will struggle to score against them if they don’t have one of their best offensive games of the season.

Simi Valley has a little bit more size up front than Orange, and they’ll have to ride their front seven to pull out the victory. Without doing a ton of edge rushing, that’s been a key for them all year. JimE DeYoung is a force at LB with 126 tackles on the season, and DL Michael Molidor and Damian Hartz, and LB David Kempton all bring great size to the Pioneers’ defensive interior as well. Cooper Mulholland is another standout at LB. Mason Prouty and Wesley Fry lead a solid defensive backfield that will be put to the test against Orange’s explosive offense and incredibly accurate aerial attack.

If Orange sleeps on Simi Valley, their season will end one game earlier than expected. The Pioneers are dangerous, especially after beating Norte Vista with a surprising amount of room to spare. That said, Orange has won 11 games this season with a lot of room to spare, and Simi Valley seems to be in the same ballpark as J.W. North, who they handled decisively. If anything, the Panthers could benefit from just one close win on the season should they make the finals and face Crescenta Valley, because right now they don’t have a single one, and they very likely would not blow out Crescenta Valley even if they won. All year it’s seemed that they’re on a collision path with the Falcons in the finals, but first they have to survive a legitimate upset threat in red-hot Simi Valley.