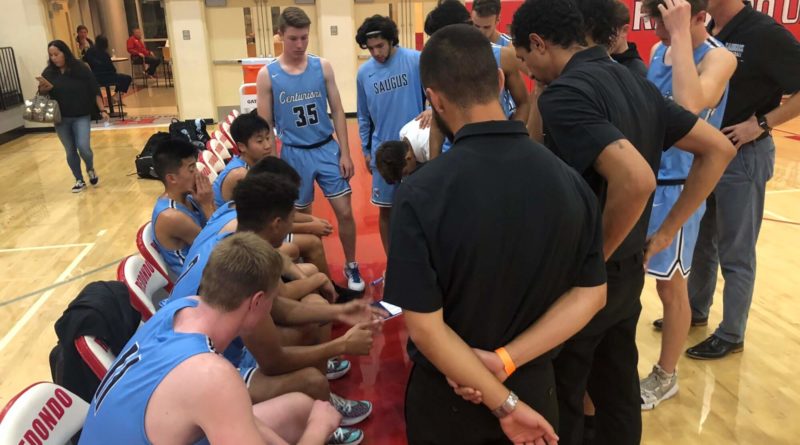 Saugus head coach Alfredo Manzano knows his group will never be able to return to normalcy — “Some of us were there,” he said after the win — but he acknowledged that playing games will at least help.

“Getting back into a routine, the bus rides, finally getting back to practice, just being around their teammates, that’s what [this team’s] looking for,” he said.

Saugus jumped out to a 15-0 lead on Tuesday. The Centurion bench went crazy after every made basket and ballistic when their teammates took charges. They were having fun.

“I was curious to see how we were going to come out,” Manzano said. “Honestly, I thought we might come out a little flat when we were on the bus ride, but when we got into the locker room I just saw their eyes and I felt like they were going to bring a lot of energy.”

The Saugus players won’t return to their campus until the school reopens on December 2. They haven’t been able to practice at school.

“It’s been tough to go back for some of the guys so we’ve been in a different venue,” Manzano said.

Saugus has dedicated its season to the shooting victims and to the Santa Clarita community.

“We’re playing for something a lot bigger,” Manzano said. “It’s more than basketball.”

Senior guard Adrian McIntyre has the victims’ names written on his shoes next to the phrases “fly high angels” and “for the ones who CAN’T.”

After every huddle, the Centurions now yell “Saugus strong!” instead of their usual “Saugus on three, family on six” rallying cry.

“Now we have a bigger purpose to play for,” McIntyre said. “We have more people to play for. It’s not just us, it’s the whole city of Santa Clarita, the victims, their families, everyone who has been impacted by the shooting, that’s who we play for, so whenever we feel down, we think about that.”