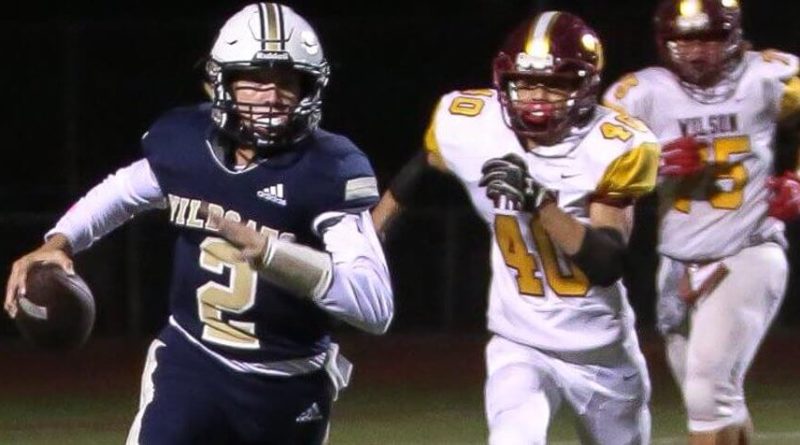 Someone’s undefeated season is going to end in disappointing fashion this Friday, and it could be either one of these teams. Serrano is the light favorite, but calling Cypress an underdog would be too far. They struggled to pull away from Ventura last week and don’t have quite as many impressive wins as Serrano, but Serrano has only beaten one team this season that’s in the same ballpark as Cypress, which was Apple Valley when they were at full health.

Serrano runs the heck out of the ball. RB Wahkill Sullivan is their biggest offense threat with 1,328 rushing yards and 11 touchdowns this season, and they have a good dual-threat QB in Parker Chaffee who can throw the ball consistently and is also their second-leading rusher. The Diamondbacks have a few solid receivers as well, with JJ Rider as their top wide-out and one of the Southern Section’s very best tight ends on any team below Division 3 in Matt Lowe. Teams know that Serrano prefers to operate on the ground, but their passing game is strong enough to the point that they can’t really be loaded up on. That’s also in part due to a strong offensive line led by 6-7, 295-pound OT Garrett DiGorgio.

Their defense has been spotless this season as well. In addition to dominating at TE, Matt Lowe is a 3-star DE who’s committed to Fresno State. LB/DB Stephen Williams, MLB Michael Thacker, DL John Smolenski, D-1 prospect FS Earl Hodson, and CB Nathan Sandoval round out a defense that has suppressed every foe it’s seen this year.

Cypress is at roughly the same level on both ends, but is less dependent on running the ball. They pass and run about half the time, with a very accurate pro-style QB in Dylan Eldredge and great receiver in Elijah Vaelua running the passing game, and Isaac Hurtado dominating at running back while also playing some WR/SB. Corey Anesi is another option at WR. Defensively, Hurtado forms a standout linebacking trio along with Ceasar Gallardo and Aidan Ashcraft. Hurtado is also a threat to take home kick and punt returns, and is a 3-star ATH recruit with offers from eight D-1 schools, including UCLA.

Serrano gets a small edge because of impressive wins such as Apple Valley (17-7) and Highland (28-6). But don’t be too surprised if Cypress is in the finals.

No. 3 Temecula Valley vs. West Ranch

This game between 10-2 upstarts that just pulled out one-point victories in the semifinals is a candidate to come down to the wire. West Ranch just dropped 57 points on Long Beach Wilson. The only problem is for them, they gave up 56 points in a playoff game in doing so. Their defense was pretty strong this season going into it though, and some people had Wilson as the best team in the division, so a win is a win and they’re in good shape if they don’t allow any more outbursts like that this season.

Temecula Valley has had a stronger season when you look at who they’ve beaten. A team expected not to contend for second in the brutal Southwestern turned heads everywhere by winning it, and they were only two points away from going undefeated in league suffering a 51-49 loss to Murrieta Valley. Luckily for the Golden Bears, Murrieta Valley lost to Chaparral and Vista Murrieta, and Temecula Valley had the tiebreaker against 4-1 Vista Murrieta. They’ve beaten Vista Murrieta, Chaparral, and Murrieta Mesa this season among other strong teams, so they’ll be ready to bring their A-game against West Ranch.

As for West Ranch, their losses have come to great teams in Hart and Valencia (Valencia), but they don’t have many signature wins. Wilson was the best team they’ve beaten so far, which bodes quite well for their offense against anyone else in this field. They also pounded Golden Valley 52-13. Other than that, their schedule hasn’t been particularly challenging, but it hasn’t been so weak that they won’t be ready for another challenge this week.

The biggest strength for Temecula Valley offensively is their running game, led by Division 7 two-way player of the year candidate RB Brody Hughes. He’s coming off his best game yet against Carter, in which he ran for 254 yards, and scored two of their three touchdowns, although only putting up 21 points in that game and winning by just one isn’t what they’d like to lay claim to going into such a strong matchup this week. RB Logan Moreno would be RB1 on a ton of teams, and has 546 yards this season on the ground in addition to Hughes’ 1,421 yards and 24 rushing touchdowns. QB Zach Cutka has 1576 passing yards on the season with Matthew Lindquist and Abe Flores as his top options, in addition to a few other receiving threats.

West Ranch can certainly run the ball, but they depend more heavily on their passing game. QB Walker Eget turned heads last week throwing for seven touchdowns against a great Wilson defense in the dramatic victory. RB Reiger Burgin gives them a strong ground presence though, along with secondary running backs in Jackson Reyes and Derek Miranda. The Wildcats have a superior receiving corps led by Brandon Wyre (990 yards), Nicholas Kohl (769), and Zachary Van Bennekum (625).

Defensively, these squads seem to be on about the same level. Temecula Valley has a few big names on that side of the ball. There’s DE Jay Max Jacobsen who’s committed to UCLA, Hughes, who manages to be a 3-star recruit at FS with ten college offers when he’s not running over opposing defenses, Brandon Wilson at MLB, and D-1 ATH prospect Pulsipher going for ten tackles per game at OLB/DB while also shining as a punter/kicker and wide receiver. DT/NG Coleton Defalco, LB Blake Frazier, and DE Josh Hilton are also standouts up front. CB Connor Duffy is a strong presence at CB as well.

For the Wildcats, MLB Bryce Buchanan is up to 151 tackles on the season, Van Bennekum has 92 at OLB, and DE JC Cotti is also a force in their front seven. MLB Nick Aquino and DB Jackson Reyes are both important pieces of the puzzle too.

This game will come down to whoever is feeling it come game time. The Golden Bears have beaten better competition this year, particularly in their upset of Vista Murrieta, but West Ranch has shown they have what it takes to go all the way in Division 7. This matchup is one of the semifinals’ best games to watch.