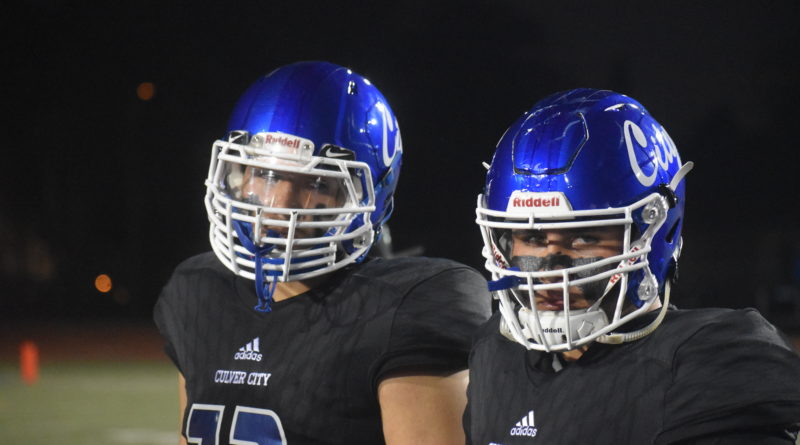 Division 5 favorite Culver City might be in for its biggest test of the season so far, a Swordsmen squad that has gone about as much under the radar as anyone of their level. St. Paul is listed at 11-1 after Narbonne forfeited their 56-19 victory over them, in addition to a respectable 28-20 loss to Sierra Canyon before they started league play and never came close to facing a challenge. The Swordsmen also blew out El Modena in the first round before beating Yorba Linda by two touchdowns last week. After knocking out a strong Mustangs squad somewhat decisively, they are officially an upset threat against dominant Culver City.

Jahmal Wright’s Centaurs are 12-0, and have only come close to losing against Palos Verdes (55-52) and Lawndale (32-27). Culver City’s defense is fast and executes well, but it’s their offense that’s turning heads. Their 32 points against Lawndale was the least they’ve scored this season, and they’re averaging 51.2 on the season.

Zevi Eckhaus is up to – brace yourself – 4,315 passing yards, 58 passing touchdowns, and only five picks on over 71% completion. For what it’s worth, that’s in addition to five rushing touchdowns and nearly 250 rushing yards on the season. In addition to Eckhaus, there are more D-1 prospects in Culver City’s passing attack with first and second receiving options Chris Miller and Tanner Duve, who have combined for over 2,000 receiving yards this season. Emari Pait, Legend Waring, and Dylan Clark all over 250 as well. In addition to their dominant passing game, Culver City has a strong running game behind Mekhi Evans-Bey, who’s one of the smallest guys on the field but often impossible to bring down. With Eckhaus’s running ability, RB2 Ayinde Bankole, who shined last week against Chino Hills, and a gritty O-line, Culver City really doesn’t seem stoppable on offense.

The Swordsmen run the ball more often than not – about 70% of the time – and like to slow the pace against top foes. QB Gene Valdez is a legitimate dual-threat and they have a standout RB tandem in Trenell Ridgley and Tyler Adams. When Valdez does throw it, Angel Garcia is his top option, followed by Justin Jackson. The Swordsmen will have a size advantage at offensive line with OC Calaijah Fido (5-11, 337) and OT Marion Miller (6-5, 310) that could cause major problems for Culver City.

St. Paul also probably has a better defense, although a ridiculously fast pace sometimes inflates the points allowed number for Culver City. They lean on their front seven, and their size advantage up front extends to both sides of the ball. Linebackers Jonathan Fuamatu and Rolando Espinoza, and defensive lineman Nehemiah Tualaulelei-Malele, Elijah Gallegos, Elijah Hatfield, and Isaiah Castillo are the biggest names for the Swordsmen’s defense. Angel Garcia and Daniel Pallan lead a defensive backfield that has been strong this season but will really be put up to the test against the most prolific passing attack they’ll see.

Despite lacking the size on defense you’d expect from a Division 5 powerhouse, Culver City wouldn’t be where they are without an athletic defense that has the motor to defend against bigger foes. CB Khary Crump is the biggest name and an Arizona-commit, and leads a strong defensive backfield with Enson Bravo. LB Isaiah Williams is up to 133 tackles this season and anchors an organized front seven along with DL/LB Aaron Salas.

Culver City will be expected to continue their dominant season through the semifinals, but St. Paul has the size to give them serious problems on both ends. That said, it won’t give them a chance if the Swordsmen’s defensive backfield isn’t up for the workout of a lifetime. Culver City doesn’t spend much time with their offense on the field, so wearing out a smaller Centuars’ defense will have to be the way to exploit the most prolific offense south of Division 3.

No. 3 Glendora vs. Aquinas

With Aquinas upsetting Oxnard in the last round, it might not be fair to call them underdogs anymore. They started off the season with a loss to Grace Brethren and a surprising shutout loss against a strong Kaiser squad, and haven’t lost since. Last week proved that they were ready for top competition without playing in a challenging league, so they should be on close to even footing with Glendora.

Glendora is 11-1 with their only loss coming narrowly to a dominant Ayala squad that was undefeated and heavily favored to win Division 6 before Crespi stunned them last week. Like Aquinas, they’re a very strong team that hasn’t gotten the chance to show it consistently because of relatively easy competition for most of the regular season. But there was a chunk of the season where it looked like they, not Culver City, were the favorites to take the top seed in Division 5 and win the thing. Their biggest strengths are senior experience and balance, between their passing game, running game, and strong defense.

The Tartans are led offensively by RB Xzavier Ford, who’s sitting on 1,489 rushing yards and 17 touchdowns this season. Noah Acuna is another strong option at RB who would be RB1 on a lot of good offenses. They also have a strong, consistent pro-style quarterback in Jacob Gonzalez, with Cade Marshman standing out as their top WR with over 1,000 yards and 14 touchdowns in the air. AJ Salgado and Matt Gonzalez are nice second and third options for Glendora at receiver.

The most points the Tartans have given up this season was 27, which came in a blowout victory. Their defense is led by OLB Hunter Heflin, MLB Bryce Overstreet, and DBs Braydon Brus, Jacob Guerrero, and Eddie Jabbour.

Aquinas has a lot of similar strengths, with strong defense and overall balance. They have a strong running back tandem in Terayon Sweet and Isaac Handy, and a pro-style quarterback in Marco Perez. Rodarial Abercrombie and BYU-commit Terence Fall are the top receiving options among a good few. The Falcons have the biggest defensive threat on either side in DE Sione Lolohea, who recently visited Boise State and Oregon State, two of at least eight D-1 schools that have offered. SS Brent Austin and CB Anthony Cooper are standouts in the backfield. Aquinas hasn’t showed any weaknesses since those losses in the first two weeks of the season.

Was beating Oxnard a bit of a fluke for the Falcons, or are they really good enough to win Division 5? It’s one or the other, and there’s a solid chance they’re going to continue to bring some unexpected competition into the mix for the title. It’s reasonable to say rock-solid Glendora has a slight edge, but it’s anyone’s game. 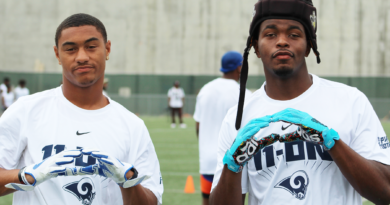 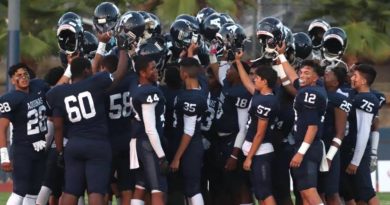 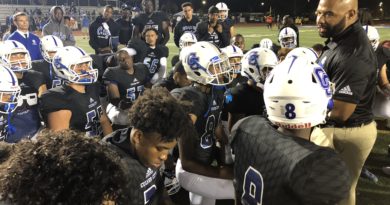