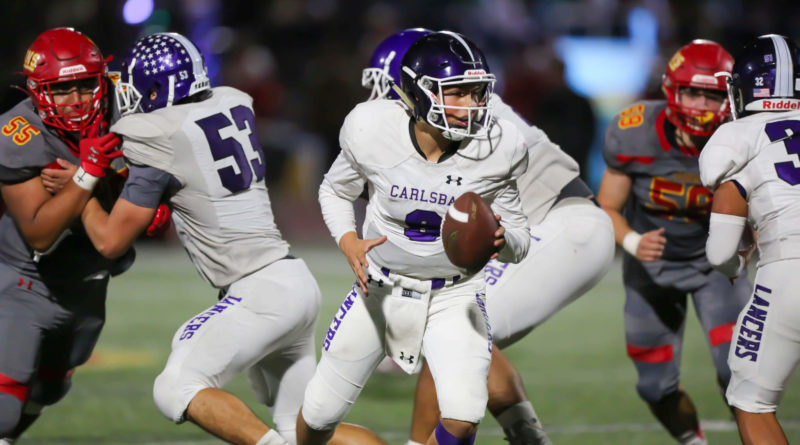 Bishop’s got a test on Friday night when they took on nine-seeded Poway in the division two playoffs. The Titans were severely under seeded in the bracket and gave Bishop’s all they could handle. The two teams combined for 1,064 total yards and 103 points. Poway scored a touchdown to cut the lead to one point with 28 seconds remaining but opted for the two-point conversion to go for the win. They came up a foot short allowing Bishop’s to remain unbeaten as they head into the semi-finals.

Carlsbad secured a big victory on Friday night taking down Cathedral Catholic, 21-20. The Lancers faced a 7-0 halftime deficit and saw their offense step up in the second half thanks to three touchdown receptions from Cole Wright. Carlsbad was able to slow the Dons rushing attack and overcame a couple late errors when they were trying to put the game away. They’ll have to come up with another big effort when they face Helix at Southwestern College on Saturday night.

It looked like Oceanside’s season would end on a sour note on Friday when they faced a 19-0 third quarter deficit at Steele Canyon. The Pirates slowly worked their way back, forcing overtime and eventually winning thanks to 26 unanswered points. Junior quarterback Jakob Harris threw passes to seven different receivers including touchdowns to Rich Jaime and Kavika Tua.

Oceanside’s Kavika Tua continued his excellent junior campaign in the Pirates quarterfinal win. He ran for 197 yards and a touchdown and also caught five passes for 96 yards and another touchdown.

The division four quarterfinal between Orange Glen and Patrick Henry featured a dual between two of San Diego’s best running backs. Senior Cael Patterson ran for 285 yards and three touchdowns in the win. Sophomore Elijah Lux filled in at quarterback for the Patriots and threw two touchdowns, but also carried 45 times for 304 yards and two more touchdowns.

Colby Kopacz did his best to keep Poway’s season alive in the loss. The senior ran twelve times for 237 yards and four touchdowns against Bishop’s.

St. Augustine saw their season end with a last-minute loss against Helix in the open division semi-finals, but senior Samuel Scaife ended his career with a big performance. Contributing on both sides of the ball, he grabbed three interceptions in the game for the Saints.

Carlsbad senior linebacker Kyle Vassau had 18 tackles including the game-winner on Cathedral’s two-point conversion attempt to send the Lancers to their first open division championship appearance.

Lincoln defensive back Xavier Hamlett had four tackles and two interceptions including one that he returned for a touchdown as the Hornets held off Torrey Pines 34-27 to advance to the division one semi-finals next week against Mission Hills.

San Marcos grad Terrell Burgess had 9 tackles, half a sack, and a fumble recovery un Utah’s 49-3 win over UCLA on Saturday night. Burgess was also invited to the annual Senior Bowl earlier in the week.

Top Games in Week 3 of the Playoffs: