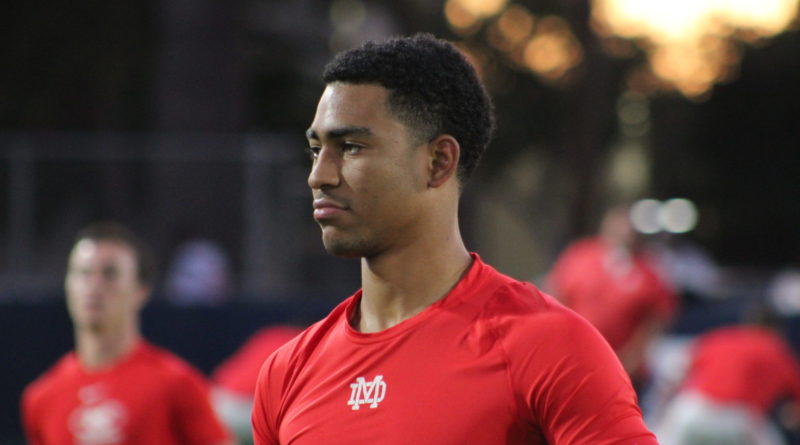 The thought of anyone being heavily favored over 11-0 Mission Viejo is disconcerting. The Diablos just knocked off Servite, and have handily beaten the likes of San Clemente, Upland, and La Habra on the year. Mission Viejo is a consensus top-20 team in the country.

But then there’s Mater Dei, the undisputed top team in the country who has knocked them out of the playoffs two years in a row. Both years, Mission Viejo was just as elite as they are right now, and both times, the Monarchs beat them easily.

Once it’s time for the Division 1 semifinals, the teams left in the field have nothing but strengths. You know the drill: Mater Dei has this season’s best high school player in the country, Bryce Young; the best offensive line in the country led by Myles Murao, Tai Marks, George Miki-Han, and Andrew Ueli-Foaatoalia; a top-flight receiving corps featuring Kody Epps and Kyron Ware-Hudson; and the best defense in the country, led by too many D-1 guys to count. For starters, there’s CBs Jaylin Davies and Domani Jackson, DT Sefita Tupe, DE Tyler Narayan, and LBs Raesjon Davis, Kobah Fuamatu, Dean Neeley, Ray Leutele, and Nate White. Their whole squad on both sides reads as an all-star team.

Mission Viejo has a lot of experience, a lot of pride, and no intention of backing down to the one of the best teams in recent high school football history. They are well-rounded, well-coached, and have zero significant flaws to exploit.

On offense, the Diablos have an elite dual-threat QB of their own in Peter Costelli, perhaps a better running back core than Mater Dei, in Jacquez Robertson and Tyson Scott, and a great offensive line. They’ve been even better defensively than offensively this season behind one of the best front sevens in the country featuring DT Keanu Tanuvasa, DEs Lance Keneley and Logan Schwenke, and LBs Easton Mascarenas, David Meyer, and Brenndan Warady. They have a very strong secondary including John Burns and Ryder Fitch. There is literally nothing they aren’t excellent at, and depth is not an issue either.

But they are going up against the only team in the country that’s so well-rounded that there’s nothing one can point to in making a case that Mission Viejo has a legitimate chance.

All year, people have saying that Mater Dei and St. John Bosco (10-1) are guaranteed locks to again face each other in the Division 1 finals. At this point, Corona Centennial (9-2) has shown enough to prove that they have a very serious chance of upsetting Bosco. Both teams have a loss to Mater Dei in common, and Centennial also had a preseason loss to Cathedral Catholic before it became clear just how good Cathedral Catholic was. Other than that, neither has lost, and both have had top-flight competition.

In the last four weeks, Centennial has had two dominant wins against outstanding teams, victories that are the very essence of the term “statement win” in beating Norco 61-23 on 10/18 and JSerra 56-0 last week. Speaking of statement wins, St. John Bosco beat Calabasas 63-7 last week. Both teams are scorching hot and poised to play their best ball of the year.

St. John Bosco’s biggest advantage is arguably the best player in the country, quarterback DJ Uiagalelei. His combination of size and raw passing ability is unmatched, and as far as college and professional scouting goes, he’s one of the best prospects of this generation, and to boot he’s started running the ball with great success this season at 6-5, 245. Uiagalalelei has a phenomenal receiving corps led by Kris Hutson, Beaux Collins, and Logan Loya, and an enormous offensive line.

Cen10 runs things very differently than the Braves on offense. St. John Bosco opts to huddle a good amount of the time, the Huskies not only shun the huddle but also go from snap-to-snap as fast as any high school team you’ll ever see, largely because of a strong and organized offensive line. They are infamously successful at rotating in three excellent quarterbacks every game in Carter Freedland, Ala Mikaele, and Jake Retzlaff, who all bring different dimensions, and all have WRs Gary Bryant and Branden Alvarez to pass to. But when it’s time to score, they usually do it on the ground, either through their quarterbacks or star RB Nicholas Floyd, who goes under the radar but had 1,229 rushing yards and 27 rushing touchdowns in the regular season alone. Meanwhile, the Braves have a few strong options at running back in Nathaniel Jones, Rayshon Luke, and Jabari Bates, but none of them have the workload of a typical RB1.

Bosco’s defense is world-class as well, although it faltered against Mater Dei and was far from dominant in a narrow victory over Servite. Overall, it’s held up plenty against the best offenses in the country. Their linebacker core of Kourt Williams, Danny Lockhart, Ma’a Gaoteote, and JonJon Vaughns is arguably the best in the country. DT Kobe Pepe anchors a huge defensive line, and they have a great secondary as well with James Smith, Jake Newman, and Josh Alford.

Centennial’s defense struggled against Mater Dei and Cathedral Catholic early on in the season, but whose wouldn’t? Their defense isn’t quite as good as Bosco’s, but if they contained Norco and shut out JSerra, the Huskies will at least be able to hang defensively with the Braves’. They have the top-ranked prospect in the country in the class of 2021 in DE Korey Foreman who leads a devastating defensive line. The front seven is rounded out by an excellent linebacking duo in Jacob Mitchell in Simon Hall, and Isaiah Young leads a strong secondary.

It would be a long shot for the Huskies to pull off the upset, but the odds are so much better than most people realize. They’ve already seen Mater Dei this season, and “only” lost 42-12 in a game filled with errors on their end. Centennial plays at a pace that nearly nobody can match, and is excellent at forcing opponents to play at their pace. That said, Bosco has two key matchup advantages: a quarterback who is comfortable taking over singlehandedly when the game is on the line, and enough size to go toe-to-toe with a Huskies squad that has had a size advantage on both sides in probably every game they’ve played this season outside of maybe Mater Dei.