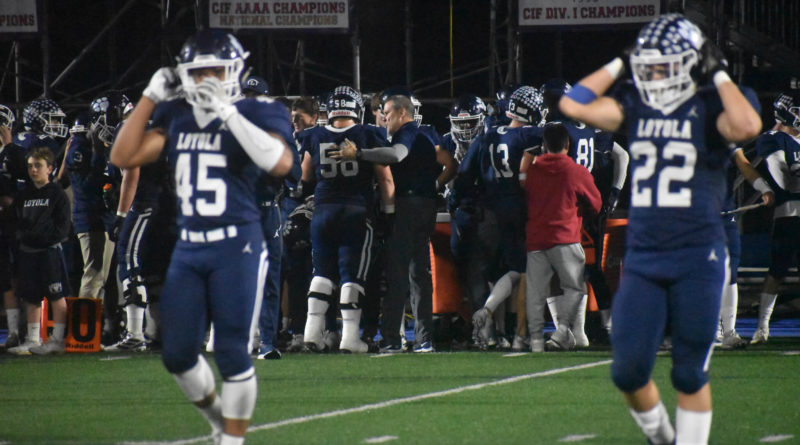 Looking just at records and Paramount’s top seed, some might call them the clear favorite, but this is pretty close to a tossup. Paramount has been outstanding all year at 11-1 with their only loss coming in overtime to Bishop Amat, but San Juan Hills is rolling just as much right now. They started off 2-3 but their losses came narrowly to Orange Lutheran, Edison, and by a couple touchdowns to Tesoro. Since then they haven’t lost, thoroughly blowing out several solid teams, and last week they beat Hart 52-21 in easily their best game of the year yet.

San Juan Hills is a physical team with a rugged defense on which nobody gets much leeway. With 34 tackles for loss, 3-star DE Tyler Wegis is the biggest name for a front seven that isn’t physically huge but plays very big. He’s joined by LBs Jake Hall, Jonah Johnson, and Bryce Crider, and a trio of strong safeties by trade who do a number of things defensively in James Gaines, Joey Hobert, and Billy Hester.

Paramount also has a very strong defense with a good combination of bulk, versatility, and speed. Their defensive backfield is led by nationally ranked safeties Justin Livingston (FS) and Terrell Taylor, a SS who also plays some OLB. Sione “Riz” Hala has also been a breakout OLB/SS as a sophomore, joining standout MLB Xavier Shamsiddeen and SS/OLB/CC Dejhawn Freeman in the defensive mid-backfield. The Pirates have great size up front as well with DE Jonathan Grant, DT Deantowine Thomas, and DT/NG Jerry Ahching. Their defense is the complete package.

Another thing these teams have in common is that each has a very steady pro-style quarterback. For Paramount, it’s Kingston Hala, who’s thrown over 3,000 passing yards on the season on a massive passer rating of 140.1. He’s also very bulky for a quarterback and is hard to bring down when he keeps it, which he does quite a bit at the right times. Hudson Jones is under center for San Juan Hills, who is at 2,264 passing yards with a whopping completion percentage of 72.8, and only three picks to 32 touchdowns.

The only differences left to pick out between these squads is that the rest of San Juan Hills’ playmaking core is centered around a few guys, whereas Paramount spreads it out a bit more. In addition to playing DB for the Stallions, Hobert is a 3-star receiver with 1,140 receiving yards and 18 touchdowns on the season. Gaines is their next leading receiver with 366 receiving yards and seven receiving touchdowns. Austin Hogan has nearly 1,300 rushing yards on the season, but that’s the bulk of the run-game for San Juan Hills, who only has four rushing touchdowns outside of Hogan’s 14.

For Paramount, Anthony Williams is their top receiving target at just over 1,000 yards on the season, but Tyron Bates has 643 and nine receiving touchdowns, Livingston has over 500 and eight touchdowns, and Willie Cleveland III has 394 receiving yards and six touchdowns as a fourth option at WR. They also don’t have a top running threat like the Stallions have in Hogan, but freshman James Thomas is a solid contributor with 569 yards and seven touchdowns. Hala is a running threat at QB unlike Jones, and there are a few other guys in the mix, so ultimately they have a tad more rushing yardage on the season than San Juan Hills.

There’s not a lot separating these two sizzling hot squads. It’s going to come down to which is even hotter come game time. It’s really a 50-50 game.

No. 2 Camarillo vs. Loyola

A couple months ago, this didn’t look like it could be a game, but Loyola has improved so drastically since the start of the season that they’re a threat to knock off everyone and everyone in Division 4. With a shutout win over Palos Verdes and a decisive victory over Villa Park already in these playoffs, Camarillo should be scared, regardless of Loyola’s 5-6 record.

Camarillo is very arguably the most talented team in Division 4, and was the clear favorite coming down the stretch of the season. There’s a solid case to make that they still are. But the Scorpions have come back down to Earth in the last three weeks.

They’re as capable as ever of running off with the division title with room to spare, but they don’t look as mighty after winning very narrowly against Damien and Downey, great teams but not on the level of some of the teams that Camarillo smoked this season. Of course, they lost to Grace Brethren in the last week of the season as well, but it wasn’t a blowout, and there’s no shame in being 11-1 with just one loss against Grace Brethren. What’s more worrying is struggling to put games away since that loss. But they’ll be favored significantly against Loyola.

The Scorpions have been phenomenal this season, blowing out every team they faced through the first nine weeks except for Oxnard, who they defeated by one point. RB/SB Jesse Valenzuela is ridiculously quick and shifty, and one of the most exciting players to watch in SoCal. Dual-threat quarterback James McNamara has been one of the most consistent QBs in Division 4 as well. The two of them lead a well-balanced offensive attack, with a strong offensive line and Carter Alexander as the top WR. Only Grace Brethren has been able to clamp them down.

Loyola is coming off of their biggest offensive outburst of the season, a 45-28 outburst against Villa Park. Dual-threat QB Brayden Zermeno has been playing strong, consistent ball. Offensively, Loyola’s biggest strength is their ability to run the ball, with Zermeno as a strong running threat for a 6-4 QB and an excellent pair of sophomore RBs with Harrison Allen and Tahj Owens. They also have a great offensive line, led by Shane Stroyke and Sam Dominguez. WRs Jacoby Kelly, Peter Vanis, and WR/TE Brendan Pernecky are their biggest receiving threats. Aggregating all facets, they are about evenly matched with Camarillo offensively, with both teams having good offensive lines, solid passing games behind dual-threat QBs, and even better running games.

Camarillo’s defense was essentially dominant this season, but has not been the same in the past two weeks against Damien and Downey. SS Grady Liddell is the biggest name and heads an outstanding safety pair with FS Jack Bowers. Their front seven plays big even when faced against even larger front lines, led by LBs Ryan Lythgoe and Fletcher Gravel, who was injured late in the season and would be a devastating loss if he’s not available against Loyola.

Loyola’s defense was up and down this season, but lately it’s been a lot more up than down, really for most of a couple months. Shutting out Palos Verdes, who put up 52 points in a loss to a dominant Culver City squad this season, should answer any remaining questions. Juniors and D-1 prospects Ceyair Wright and Zakhari Spears form one of the better cornerback tandems in SoCal. Wright is also a standout kick/punt return who had a 95-yard KR touchdown and a crucial 35-yard PR against Villa Park. Throw in Blake Neithart and Evan Thomas, and their defensive backfield is formidable. They also have a standout linebacking core with MLBs Steven Arellano and Nikko Gonzalez and OLBs Carter Link and Dominick Belisle. DE Joshua Long leads a speedy defensive line. The Cubs’ offense is quick and swarming.

Both of these squads are filled with speed and excellent athleticism, and are pretty balanced. Will Loyola be able to compete with Camarillo’s playmaking? Will Camarillo be able to match Loyola’s energy? If the answer to both of those is yes, it makes for a great game. At 11-1, Camarillo is the clear favorite over 5-6 Loyola, but don’t be too surprised if the Cubs are overwhelming once again come Friday. Especially if Gravel is out for Camarillo and can’t help guard against Loyola’s stellar running game, they could be in for a surprise.