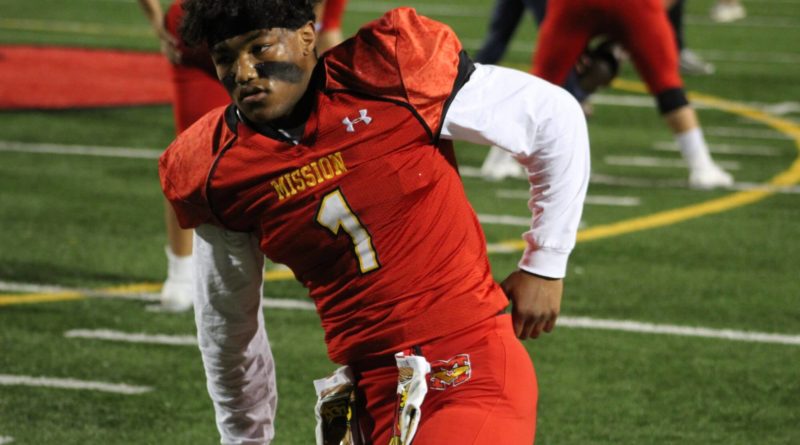 MISSION VIEJO — Servite scored 28 second half points, but Mission Viejo hung on to beat the Friars 38-35 on Friday in the two teams’ first round Division 1 playoff showdown. Below are five takeaways.

“That’s how we closed this game out, on the ground, being physical,” Mission Viejo head coach Chad Johnson said after the win. “We put the weight room on our back if you will. We ran the ball really well.”

The Diablos grounded and pounded their way to a 10-0 regular season and they stuck with that style on Friday. Mission Viejo junior quarterback Peter Costelli rushed for 68 yards and a key third quarter touchdown, junior running back Jacquez Robertson had 18 carries for 99 yards and two touchdowns, and Tyson Scott, another junior running back, carried the ball 11 times for 52 yards and a score.

The Diablo offensive line deserves a lot of credit.

HOW THE GAME WAS WON

At halftime, Mission Viejo led 17-7. In the third quarter, Servite scored a touchdown on a Noah Fifita two-yard pass to Tetairoa McMillan following a Costelli fumble. Mission Viejo then went three and out on its next possession leading 17-13. The Diablos punted and Servite had a chance to take the lead.

Johnson took the blame for his team’s offensive miscues to start the third quarter.

“In the first half we came out and ran the football well and for whatever reason I went away from that,” he said.

The Friars marched down the field on their next possession but then could not convert on 4th and goal from the Mission Viejo two-yard line. On the ensuing Mission Viejo possession, the Diablos went back to the run, which sparked a 98-yard drive that culminated with a touchdown on an 18-yard Costelli scamper. That score put Mission Viejo ahead 24-13 with 9:24 to play.

Both teams went touchdown for touchdown from that point on. With ten seconds to play, Fifita hit McMillan for their third TD connection of the night. Servite trailed 38-35 following the score and attempted an onside kick on the next play. Mission Viejo recovered to win the game.

What else can you say about Noah Fifita and Tetairoa McMillan? Fifita completed 21 of 34 passes for 341 yards and four TD’s in defeat. Ten of those passes went to McMillan for 137 yards and three touchdowns. To get that kind of production out of two sophomores is incredible.

With Troy Thomas at the helm and Fifita and McMillan in the Servite lineup for the next two years, the Friars should be a consistent top team in the region. McMillan might be the best receiver in Southern California, regardless of class.

Johnson was blown away by both players on Friday.

“[They’re] unreal,” said Mission Viejo’s head coach. “They’re raised the right way with great parents and that’s why they come out here and play and represent their families, their programs and their schools well.”

Mission Viejo knows they’re in for a challenge next week in the semifinals when they host Mater Dei.

“It’s the number one team in the country,” Johnson said. “We have our work cut out for us.”

Mater Dei beat Mission Viejo in the Division 1 quarterfinals last season 56-17. Johnson knows Mater Dei well from his time as St. John Bosco’s offensive coordinator, but this game will still be a major challenge. The Monarchs haven’t been close to losing a game in 2019.

WILL THE SOUTHERN SECTION EVER CONSIDER FOUR TEAMS IN D1?

Maybe it’s time to move to a four team field in Division 1.