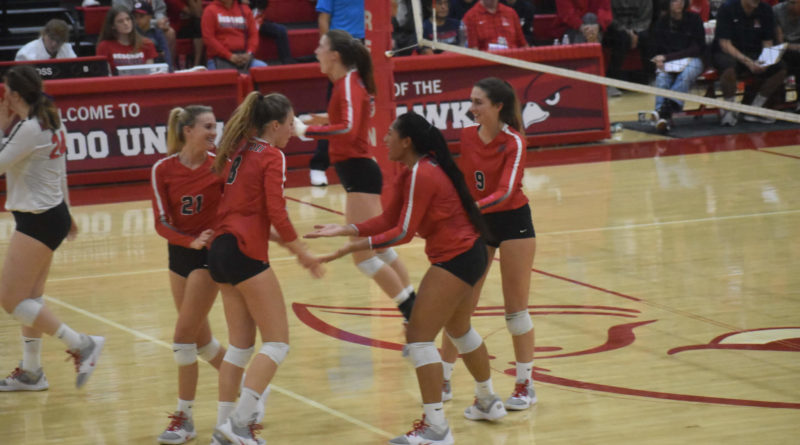 Mater Dei was emotional after losing out on a three-peat bid for the division title, but knew their season was still fully alive with a state title run still potentially in the cards. And it’s safe to assume they knew that they’d have to get through the unstoppable Sea Hawks to go all the way. In their third crack at Redondo Union on the season, they finally did it in dramatic fashion.

Redondo took the first set 25-19, but Mater Dei jumped out to a 12-3 lead in the second set and never looked back. The lead grew to 19-6, and the Monarchs took the set 25-14, although not before Redondo went on a small run when the set was already essentially decided to garner some momentum going into set three.

Unsurprisingly, the third set was neck-and-neck pretty much the whole way. It was tied at 5-5, and neither team gained any separation at all up to 15-15. Then Redondo reeled off four straight points, forcing a Mater Dei timeout. The Monarchs nearly caught up immediately after play resumed, cutting it to 19-18. Redondo called a timeout and went on a small run of their own, getting the lead up to 23-19 and taking the set 25-20.

During the ensuing break, Redondo stayed loose up two sets to one, volleying around and keeping the blood flowing. Meanwhile, Mater Dei spent the entire break huddled up. Both teams had numerous very uncharacteristic unforced errors down the stretch of the third set, which could have gone either way. The pressure was mounting up, and it seems safe to say that Mater Dei chose to focus on mentally locking in with their backs against the wall.

The Monarchs jumped out to a 5-1 lead in the fourth set, not relenting in their aerial aggression one bit. But Redondo erased an 8-4 deficit to tie it up at 8-8 and 9-9. They even took a few small leads, at 13-11 and 17-14. Mater Dei head coach Dan O’Dell made a very intriguing decision not to call any timeouts throughout that entire period up until it was 17-14, at which point the Sea Hawks had not only erased their lead but started drilling the final nails in the coffin. O’Dell called another timeout at 20-16, at which point Redondo and their raucous home crowd visibly smelled blood.

Around that point, Redondo had been beating Mater Dei right at the net for most of the third and fourth sets. In the middle of set four, O’Dell started rotating in his tallest lineup possible to combat what seemed to be an endless parade of crucial blocks at the net by Redondo whenever Mater Dei went for kills. He stuck with it even when it seemed that the sands of time were running out on the Monarchs’ season. And it paid off.

20-16 turned into 22-20 with Mater Dei stopping the bleeding up front, and never stopped attacking in the face of adversity. They reeled off four straight points to take a 24-22 lead, and won the set 25-23. Set four was much cleaner than set three on both sides, and filled with furious rallies featuring impossible digs and rallies being successfully played off of the ceiling. Per usual, it was clear that the audience was watching two of the very best teams in the country go at it for all the marbles.

At that point, Mater Dei had too much momentum going into set five, and would not be denied. They took it 15-6 and it was never in doubt from the first point onward.

The usual suspects led the charge for both squads. Mia Tuaniga was dominant for Mater Dei, and might have been the only Monarch to not get subbed out for the whole game. Zariah Henderson and Meg Brown were forceful around the net, and Lauren Tarnoff got some extra run at key times when O’Dell opted for more size. Cadence Gronski, Reagan Merk, and Jordyn Schilling were all solid contributors in the victory, and combined for a multitude of ridiculous digs and excellent sets.

Kami Miner, Mele Corral-Blagojevich, and Nalani Iosia were all fantastic across the board for Redondo Union. Laila Ricks and Jody Smith were both problematic for Mater Dei up front. Antonia Felix and Maya Harvey were both strong as well.

Mater Dei will face the winner of Torrey Pines vs. Marymount in the state semifinals for the title of SoCal champion.