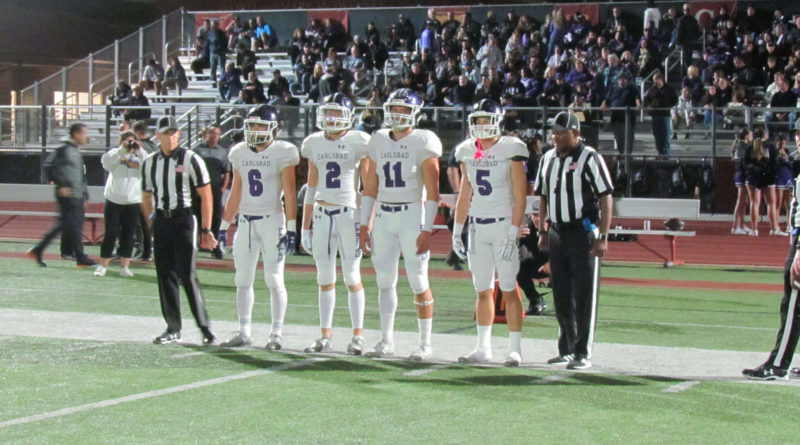 Carlsbad’s defense did an excellent job of containing the Cathedral Catholic rushing attack. The Dons were held to 201 rushing yards with 122 of those coming from featured back Zavien Watson.

“We emphasized film all week,” Senior linebacker Kyle Vassau said. “We went through every single formation and I felt like every play we knew what we were doing.”

Cole Wright has put up huge numbers all season and showed his skillset on a big stage on Friday. Wright had seven catches for 148 yards and three touchdowns.

“Our blockers and our wideouts just cleared the way for me. All I had to do was just run straight,” Wright said.

Cathedral has lacked a go-to receiving threat this season but got a good performance from junior Colman Smith on Friday night. Smith grabbed both of Cathedral’s 2nd half touchdowns, running it in from 68 yards and 25 yards.

Charlie Mirer found Colman Smith for a 25-yard touchdown pass with just over one-minute remaining. The Dons lined up to kick the game-tying extra point but suddenly turned it into a fake, with holder Colman Smith popping up and looking for a receiver. He first went left and then ran back right but was brought down by Kyle Vassau before he could find an eligible receiver.

The Lancers then took a couple knees to end the ball game and book their first ever trip to the Open Division Championship Game.

“365 days ago, we lost to this team,” linebacker Dylan Quinn said. “Ever since then we’ve been working our butts off. This moment’s even sweeter but after twelve o’clock tonight it’s on to whoever won, I don’t know who won.”

“Helix? No one else I’d rather face,” Dylan Quinn said after the game once he was told who the Lancers would be playing.

The Lancers haven’t played the Highlanders since the 2008 season, but they’ll get their chance on Saturday night at Southwestern College.

Last season in the exact same spot, Cathedral beat down Carlsbad 35-0 leaving little doubt. Tonight, the Carlsbad defense hung around and stuffed the running game allowing their offense much more time to find a rhythm.

“We wanted revenge. Last year was humiliating to us and we took that personal, so we knew we needed to come out and show them what we could do,” senior wide receiver Cole Wright said after the game.

“Our whole motto these past two weeks has been revenge,” Vassau said. “Last year was embarrassing, but they were a great team. We stepped up this year and prepared even more and we played like dogs out there.”

The Lancers trailed Cathedral Catholic 7-0 going into halftime, but the Carlsbad offense wasn’t showing many signs of hope for a potential comeback.

“We were just making a ton of mistakes that are very uncharacteristic,” Head coach Thadd MacNeal said. “So kind of settle down, get our quarterback to settle down and get the ball to number five.”

MacNeal’s message had an immediate impact on the team as Carlsbad forced Cathedral into three straight three-and-outs to begin the half while the Lancers scored on two of their own possessions to give Carlsbad their first lead.

What happened at halftime?

“Just our confidence, after that first half we knew we could roll with them. We knew we had the talent to play with them, so just play our game,” Wright said.