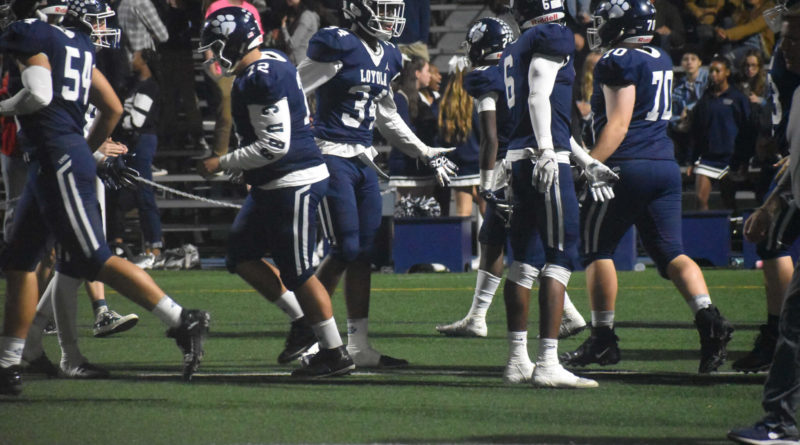 LOS ANGELES — Loyola defeated Villa Park 45-28 Friday night to advance to the Division 4 semifinals in what was, for the second week in a row, one of the program’s very best performances in years. Here are five takeaways from the game.

LOYOLA FOOTBALL IS (ON ITS WAY) BACK

Loyola was up and down this season, but after shocking Palos Verdes 7-0 last week and outlasting a worthy foe this week in Villa Park, the Cubs are in the best shape they’ve been in as a program since before everything went downhill in 2016.

At media day, new head coach Drew Casani said that no matter what came of this season, he wanted to see this program play with more fun and energy. That’s exactly what he has this season in one of the feistiest teams in the Southern Section, and the results are translating more and more on the scoreboard.

Loyola’s defense made a few mistakes, but was still really good. Most of those mistakes came in the first half of the first quarter in which they allowed two quick touchdowns and trailed 14-7 before clamping down for the rest of the game. And other than that, they were firing on all cylinders.

Defensively, they were led at DB by Ceyair Wright and Blake Neithart, with a strong performance by CB Zakhari Spears as well. They also had a great performance from their linebacking unit, in particular Carter Link, who forced a fumble, and Steven Arellano. Mariano Uy was excellent on the defensive line.

As for their 45 points, QB Brayden Zermeno and RBs Harrison Allen and Tahj Owens were all on point, with Zermeno leading most of the drives and the running backs doing most of the scoring. Their offensive line was solid, with enough size to give Villa Park a bit of trouble up front and good execution on their intricate, misdirection-heavy, smoke-and-mirrors offense. Zermeno’s top targets, TE Brendan Pernecky and WR Thomas Hatton, were both very steady and dropped very few passes.

Additionally, Ceyair Wright had a huge kick return touchdown of about 95 yards in the third quarter followed by a major punt return that set up another immediate touchdown. Diego Burgos was spotless at kicker, going six for six on PATs and knocking down a 33-yard field goal to help ice the game.

For Villa Park, sophomore QB Nathan Kornely was very steady despite going up against a rugged defense after spending much of the season on the bench as an underclassman. Zeus Alefosio had a good night at WR, but overall there were a lot of dropped balls from the Spartans’ receiving corps. That was due in part to great coverage from Loyola, but it was an issue regardless. Anthony Hakai was a bright spot at RB. Davin Ancich was four for four on PATs and also did strong work at punter.

Defensively, it was not Villa Park’s best performance. Zion and Zeus Alefosio were an athletic force in the secondary as usual, and DT Alexander Antillon had a strong impact up front.

Trailing 21-14 going into halftime, Villa Park came out a bit renewed at halftime. They forced a four-and-out, and scored on a nice touchdown drive finished off by a nice pass from Kornely to Zeus Alefosio in the corner of the end zone. Ceyair Wright immediately responded with the play of the night, his kick return touchdown from all the way back, and that was when Loyola started to pull away.

Shortly thereafter, Loyola forced a quick punt, and Wright took the return about 40 yards only to be drilled once he was already out of bounds. After the penalty, Loyola was in the red zone, and Tahj Owens made it 35-21 with four minutes left in the third along with a Burgos PAT. OLB Carter Link forced a fumble on Villa Park’s ensuing drive which turned into a field goal and a 17-point lead, and there was no way the Spartans were coming back from that with the momentum Loyola had.

“It gives us all the confidence in the world that we can control all the aspects of the game, even if it’s a slow defensive battle or a shootout like [tonight].” Wright told Scorebook Live after the game in regards to winning 7-0 one week and 45-28 the next.

“Last week it was really close, it was more of a defensive battle. But this week our offense made a point of coming out strong and staying strong throughout the night, and that’s exactly what they did. I’m very proud of everyone on offense.”

As if there was any accentuation needed to support the theme of it being a new day in Loyola football, there was a fire just a couple blocks away from the game, at the corner of New Hampshire and Pico. There wasn’t much smoke, but during the middle of the game–right around when Loyola was going on a big run–ashes started falling on the field. Then, it briefly became damp enough to, for instance, fog up a camera lens and soak a camera case.

After that, the air was clear, and the Cubs by that point were getting ready to celebrate a well-deserved victory. Tacky or not, the elements from Loyola’s immediate neighborhood metaphorically mirrored a football program that is no longer a red flag after a few rough years and quickly becoming something to be proud of once again.

“It means a lot to the school,” Wright said about the win. “Everybody always talks down on the football team, and now we’re showing them something.”

“When you come off a 1-9 season, you have a chip on your shoulder. And we’ve been coming in here grinding every day, doing our best, and trying to have fun, and it showed on the scoreboard…we’re all extremely proud of ourselves.”